A false notion that Michigan communities can simultaneously ignore both science and state law to ban hydraulic fracturing seems to have taken root in certain parts of Michigan, including the part I call home.  I live near West Bloomfield, Oakland County, where local officials recently enacted a six month moratorium resolution on oil and natural gas development and hydraulic fracturing within the Township while they study whether they can set aside the state and unilaterally regulate an industry that Michigan law says they can’t.  The story, reported here, is a sad one: illustrating how little the law seems to mean in some quarters, especially when a cause espoused by a small group of anti-gas activists is at stake.

According to news reports, West Bloomfield was told by its Township Attorney that the Michigan Zoning Enabling Act poses a serious obstacle to activists’ attempt to put energy development on ice in the town – because “it limits the township’s power to prevent companies from drilling for oil or gas, operating wells and exploring or extracting the resources in many circumstances.”  He’s right:  Here’s the relevant language from the act (emphasis added):

(5)       In determining under this section whether very serious consequences would result from the extraction, by mining, of natural resources, the standards set forth in Silva v Ada Township, 416 Mich 153 (1982), shall be applied and all of the following factors may be considered, if applicable:

(a)          The relationship of extraction and associated activities with existing land uses.

(c)          The impact on property values in the vicinity of the property and along the proposed hauling route serving the property, based on credible evidence.

(d)          The impact on pedestrian and traffic safety in the vicinity of the property and along the proposed hauling route serving the property.

(e)          The impact on other identifiable health, safety, and welfare interests in the local unit of government.

(f)          The overall public interest in the extraction of the specific natural resources on the property.

(6)       Subsections (3) to (5) do not limit a local unit of government’s reasonable regulation of hours of operation, blasting hours, noise levels, dust control measures, and traffic, not preempted by part 632 of the natural resources and environmental protection act, 1994 PA 451, MCL 324.63201 to 324.63223. However, such regulation shall be reasonable in accommodating customary mining operations.

(7)       This act does not limit state regulatory authority under other statutes or rules.

I quote the entire text of Section 205 because it provides the essential context that is often lacking when natural gas opponents discuss these issues.  Notice the first paragraph deals with power transmission lines; the second addresses oil and gas wells; and the third regulates extraction, by mining, of valuable natural resources.  They are three separate activities and subsections (4) through (6) expand upon sub-section (3), making it quite clear they do not apply to oil and gas activities.

Notwithstanding all that, some anti-shale folks in West Bloomfield believe that an exception can be made to the law if the process of development can be shown to have “very serious consequences” to the area – confirming once again that these efforts by activists are more about messaging than substance.

Oil and gas opponents want to pretend that energy development is a subset of natural resources extraction.  Nonetheless, there are several things indicating otherwise.  First, the Natural Resources and Environmental Protection Act, referenced in the Zoning Enabling Act language above, does define mining as follows:

“Mining” means the excavation or removal of more than 10,000 tons of earth material a year or disturbing more than 1 acre of land a year in the regular operation of a business for the purpose of extracting a nonferrous metallic mineral or minerals…

There’s not much doubt this excludes oil and gas wells.

Notice, this language is, once again, very specific and applies only to “mining” as defined above.  There is no wiggle room here that allows West Bloomfield, or any other county or township, to legitimately claim authority under it to regulate oil and gas activity.  But, here’s what the Township says in its resolution (emphasis added):

WHEREAS the Michigan Zoning Enabling Act provides for some limitations on the Township’s ability to regulate the exploration and extraction of natural resources within the Township.

BE IT RESOLVED that effective September 1,2012 for a period of six (6) months, through February 28, 2013, a moratorium is hereby established on the consideration, review or action by all Township entities, officials, employees and/or agents on applications, proposals, requests, permits, approvals, zoning compliance or certificates regarding drilling operations in the Township that might be proposed or presented to the Township, and that during the moratorium period, no drilling operation shall be allowed in the Township.

Notice the Township asserts, against all evidence of the plain meaning of the statute; a) oil and gas development can be treated as “natural resource extraction” under the law, b) the statute only places “some limitations” on regulation and c) the township can decide whether oil and gas operations may take place or not.  Any reasonable reading of the Zoning Enabling Act provides exactly the opposite with respect to all three matters.  Moreover, a relatively recent case decided by the Michigan Supreme Court (Kyser vs. Kasson Township), where the justices severely limited the application of a rule giving mining special protections, specifically said the following with respect to oil and gas (emphasis added):

That same provision specifically limits  a county or township from regulating or controlling “the drilling, completion, or operation of oil or gas wells or other wells drilled for oil or gas exploration purposes,” and also limits them from exercising jurisdiction over “the issuance of permits for the location, drilling,  completion, operation, or  abandonment of such wells.”  MCL 125.3205(2).  Notably, there are no similar  provisions that limit or exempt the exercise of local zoning power over other natural resources, such as gravel.

Thus, the ZEA is a comprehensive law that empowers localities to zone, sets forth  in detail the development of zoning plans within a community, and specifically limits the  zoning power in particular circumstances.  The Legislature clearly intended for localities to regulate land uses, including the extraction of natural resources other than oil and gas.

The only way the meaning of these words could be any clearer is if they were chiseled onto stone tablets. The only thing muddled is the interpretation given by a township doing a whole lot of wishful thinking and giving itself power it doesn’t have. 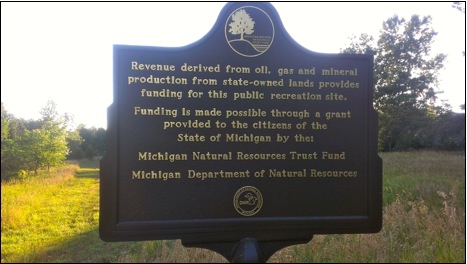 A state marker that says it all about the contributions of natural gas.