Marcellus Shale Operators Ahead of the Game on Produced Water Management

Produced water management – which is the handling of formation water that returns to the surface during day-to-day production and fracking flowback water – is something that the oil and natural gas industry continuously strives to improve upon. Here in Pennsylvania, shale operators have excelled at finding innovative solutions for produced water for nearly a decade.

Here’s a look back at how recycling and reuse became the norm in Pennsylvania, and how those innovative solutions have helped to lessen the environmental impact of this important industry.

In April 2011, the Pa. Department of Environmental Protection (DEP), under the direction of then DEP Sec. Michael Krancer, asked the shale industry to voluntarily stop sending water to 16 municipal sewage and commercial treatment plants that used dilution to treat produced water – five years ahead of the U.S. Environmental Protection Agency’s (EPA) ban of the practice in 2016. This request did not include four treatment facilities that used practices other than dilution to treat the produced water. At the time, DEP spokeswoman Katy Gresh stressed that the agency believed “we can achieve voluntary compliance” in the 30-day window the May 19, 2011 deadline provided.

“We are committed to leading efforts, and working alongside DEP and other stakeholders, to address these issues quickly and straightforwardly, and support the appropriate action taken by DEP today.

“This is the time to step up.”

And step up Pennsylvania’s shale industry did, fast-tracking the widespread implementation of an innovative solution that quickly became a standard practice of handling produced water in the Commonwealth: recycling and reusing shale produced water.

In an April 20 letter sent by MSC to Sec. Krancer, the industry committed to achieving “this milestone” by the deadline. And as the Post-Gazette reported in 2011 and the following 2013 DEP presentation shows, the shale industry was already starting to widely implement recycling into its practices in 2011. For instance, Range Resources pioneered large volume recycling in 2009 and was the first company to achieve 100 percent reuse of produced water, and Chevron Appalachian had already achieved 100 percent recycling of its flowback in 2011.

All told, Pa. shale operators recycled or reused roughly 61 percent of their shale produced water from 2008 to 2011, while about 26 percent was sent to municipal and industrial treatment facilities (which were the subject of the DEP directive), and six percent of wastewater was injected into disposal wells, mostly in Ohio. 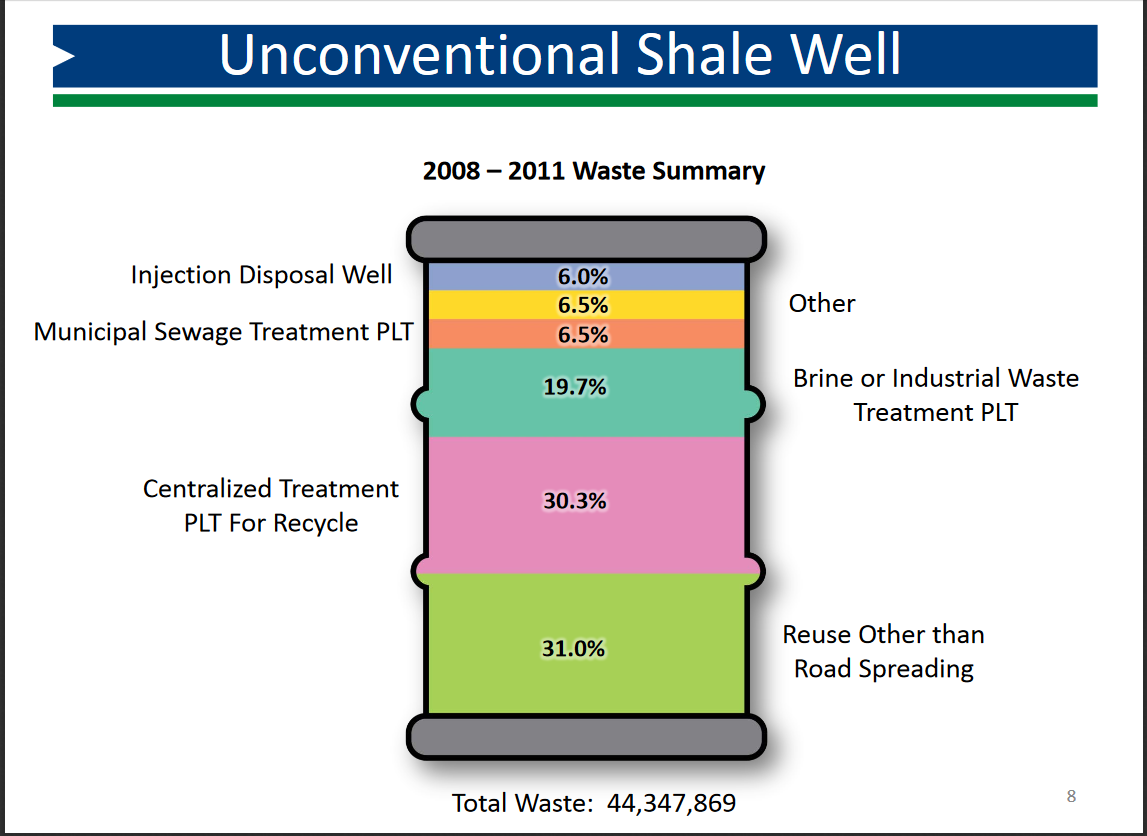 By 2012, no wastewater was sent to industrial and municipal facilities, about 12 percent went to disposal wells and roughly 86 percent was recycled and/or reused – a 41 percent increase in the percentage of produced water being treated in this manner from the previous year. 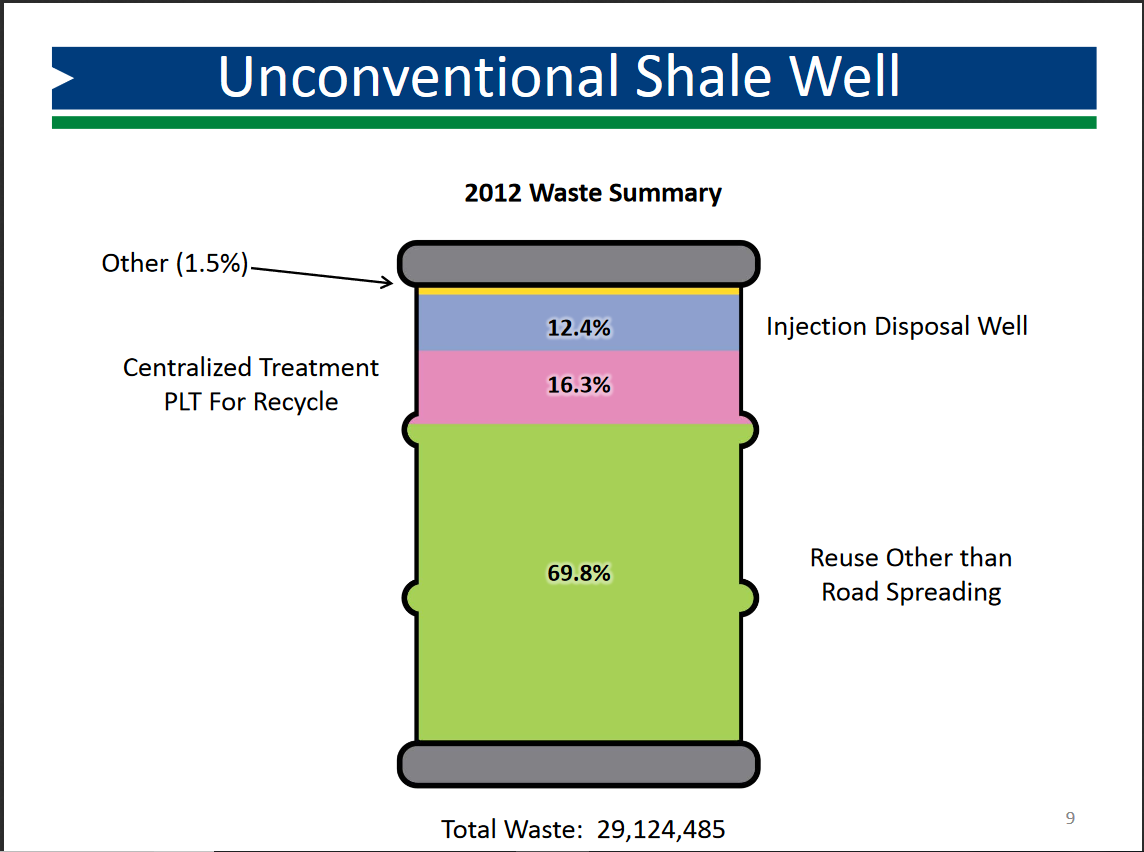 By the first half of 2013, the percentage of wastewater sent to disposal wells had fallen to just under 10 percent and 90 percent of producedwater was being recycled and/or reused – a trend that has continued throughout the last five years with companies. 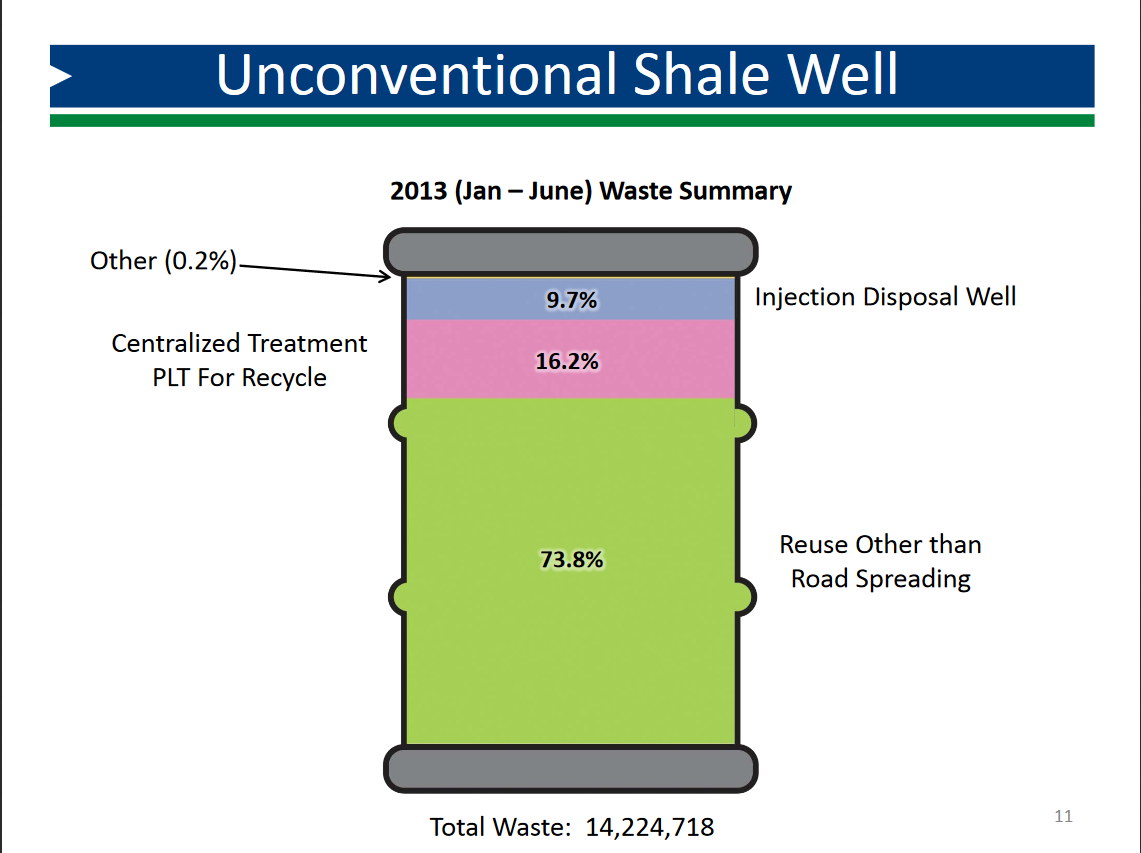 Recycling and Reuse – A Game-Changer in the Marcellus

The shale industry as a whole has been a game-changer for Pennsylvania, and produced water management is no exception. The practice of recycling and reusing produced water has spurred innovation and new businesses to crop up across the region, in addition to lessening the environmental impact of the industry, including reducing the amount of freshwater needed in shale development. And according to an October 2017 report from the Susquehanna River Basin Commission, which has been monitoring waterways for years, there have been “no discernable” impacts to water quality or quantity from shale development – that includes produced water from the process.

So how is produced water recycled?

One manner of treating shale produced water is through centralized facilities strategically located across the shale play that often treat the produced water to drinking water quality standards or better (distilled water). It is then reused by companies for future well completions and other uses, discharged back into the hydrogeological cycle or sent to industrial and municipal facilities to be combined with wastewater for discharge. In 2009, DEP received permit requests for 12 proposed facilities of this nature to treat shale produced water and at least one was already operational.

For instance, Eureka Resources has been treating produced water that is trucked to facilities in Lycoming and Bradford counties since 2008. These facilities often treat produced water to be reused in the shale development process, and any water that is released back into the hydrogeological cycle is treated to “a high purity water” that meets “all applicable discharge standards protecting the water quality of the Susquehanna River.” Any total dissolved solids (TDS) in the effluent are “well below the Pennsylvania Department of Environmental Protection water quality standard of 500 mg/l.”

The company has even been able to take the materials that it separates from the water during the distillation process – oil, methanol and sodium chloride – and sell those materials for reuse to wholesalers, oil and gas companies and even to manufacturers for things like industrial salt for fertilizer. As Eureka CEO Daniel Ertel told the Pittsburgh Post-Gazette in 2013,

“In and of themselves, [the separated materials are] not damaging. They make water a waste, but when they’re extracted, they’re things we use every day.”

Another company, RES Water, has been treating water at centralized locations in Southwestern Pa. since 2009. In addition to treatment options, the company supplies treated municipal water – up to 3 million gallons per day – that can be added to recycled shale water for reuse in well completions, helping to reduce the amount of freshwater needed in well development.

Some oil and gas operators have even started their own companies to more efficiently manage produced water. Seneca Resources repurposed a shuttered landfill water treatment facility in McKean County in 2015 to treat its produced water at a central location that is then piped, rather than trucked, to well sites in the area. Since August 2015 when the facility – Highland Field Services – began accepting water, Seneca “has recycled 100% of our own produced fluid and has also processed and utilized produced fluid from third parties that on a net basis account for Seneca recycling 50% more fluid than we produce.” This enabled Seneca to transition from having a 70 percent freshwater mix in its completions in 2014 to 25 percent freshwater in 2016.

Centralized facilities are not the only means of treatment employed by the shale industry. Another method uses portable units stationed on well sites and has greatly reduced the number of trucks carrying wastewater. The Observer Reporter explained in 2011 that one company that specializes in offering this on-site treatment method, Aquatech, is “an example of a local, homegrown company with international expertise in industrial water treatment providing a critical solution in its own backyard.”

The company was one of the first to test technology to treat produced water on location at well sites in Southwestern Pa. to, as the OR noted, “drastically reduce water consumption and truck traffic while providing recycled distilled water at Marcellus Shale drilling sites.” Aquatech’s mobile treatment unit treats water to a TDS of less than 500 parts per million.

Comtech Industries is another company that has innovated on-site treatment options that allow for 100 percent of recovered water to be recycled and reused, and lessens the number of trucks transporting water. The company explains,

“When chemistry and technology meet, the possibilities are endless, and water turns to its original clean state, offering not only an economic savings but an environmental savings, too.”

Cabot spokesman George Stark told the Tribune Review in 2015 that thanks to Comtech the company was able to reduce the amount of freshwater used in typical wells, and even completed “a whole frack on nothing but recycled [water].”

And this list of companies providing treatment options is far from exhaustive.

Produced water is a challenge that the industry has and will continue to strive to meet head-on with innovative solutions like recycling. As a spokesperson for Halliburton told Reuters in 2013, the ability for the industry to recycle produced water was “a paradigm shift,” and it’s a shift that Pennsylvania companies have helped lead the charge on. With what has already been accomplished over the last 10 years in effective produced water management, it will be exciting to see what new innovations the Marcellus industry comes up with throughout the next decade.