Over the past few months, as several batches of FOIA’d emails have revealed how closely activists have been working with the offices of state attorneys general in helping them launch climate RICO investigations, it has become abundantly clear that their effort is motivated more by politics, rather than the exercise of the law.

The latest example comes today, just after ExxonMobil requested a recusal of Massachusetts attorney general Maura Healey’s demand for company documents and communications with outside groups. Aside from the obvious free speech implications, the petition to Massachusetts states that Healey’s comments at the March 29 press conference with Al Gore “unambiguously reflected her prejudicial determination that ExxonMobil had engaged in deception in connection with the debate over climate change policy.”  At that press conference, here’s what Healey had to say:

“Fossil fuel companies that deceived investors and consumers about the dangers of climate change should be, must be, held accountable. That’s why I too have joined in investigating the practices of ExxonMobil. We can all see today the troubling disconnect between what Exxon knew, what industry folks knew, and what the company and industry chose to share with investors and with the American public.” (emphasis added)

In other words, Healey said decisively that the company “deceived investors and consumers” and that is the reason she is going to investigate.  As Attorney General, she should know that usually an investigation comes before the verdict, not the other way around!

That pre-judgement isn’t too surprising when you consider this particular AG’s office just happens to include several attorneys with close ties to the Conservation Law Foundation (CLF) – a Rockefeller-funded group in Boston that also, coincidentally, just launched its own climate lawsuit targeting Exxon.

In particular, Healey’s Chief of the Environmental Protection Division, Christophe Courchesne, came to the AG’s office “following his role as a senior attorney at the Conservation Law Foundation’s New Hampshire office where he focused on advocacy and litigation to fight climate change and advance clean energy in New Hampshire and throughout New England.”

Bennet Heart, who previously served as the Assistant Attorney General of Massachusetts was also “a Senior Attorney for the Conservation Law Foundation in Boston, one of the nation’s foremost regional environmental advocacy organizations, where he directed CLF’s Smart Growth program.”

Finally, Andrew Rainer, who served as the Chief of the Massachusetts Environmental Strike Force under former Mass. AG Martha Coakley also “worked closely with many of the non-profit organizations concerned with environmental issues in Massachusetts, including the Conservation Law Foundation.”

As EID has noted before, Bradley Campbell, head of the CLF and the primary driver of the organization’s latest lawsuit targeting Exxon, does more with the Rockefellers than just cash their checks.  When the Wall Street Journal broke the story on the closed-door meeting that took place at the Rockefeller Family Fund offices back in January — with the reported goal of that meeting to establish “in the public’s mind that Exxon is a corrupt institution” — we found out that Campbell was in attendance along with 350.org founder Bill McKibben and many other activists.

Of course, just about every single group involved in this campaign to get state AGs to launch climate investigations is funded by the Rockefellers.  Newly released emails revealed that Peter Frumhoff of the Rockefeller-funded Union of Concerned Scientists was already working closely with state AGs long before the InsideClimate and Columbia School of Journalism stories were ever published.  Frumhoff continued this work by attending a closed door briefing with the state AGs ahead of their March 29 press conference — where Healey openly admitted she thought Exxon was guilty of stuff, notwithstanding the fact that she hadn’t yet even launched an investigation. Those same emails also show that the New York Attorney General’s office specifically told activists not to reveal that they had attended this meeting with the larger group.

We also know that the subpoenas served by the Virgin Islands Attorney General Claude Walker were issued through a Washington, D.C. law firm, Cohen, Milstein, Hausfeld & Toll, where Matt Pawa used to work. Pawa was one of the activists who briefed the AGs ahead of their March 29th press conference with Al Gore.  While at Cohen Milstein, Pawa partnered with several Democratic AGs on lawsuits against Exxon and other companies. One of the lawyers who actually signed the subpoenas is Linda Singer, who recently received $15 million in contingency fees when she partnered with Virgin Islands Attorney General Claude Walker in a lawsuit against Hess Oil Company. You can buy an awful lot of toy trucks with that.

Attorney General Schneiderman’s office also has some pretty cozy relationships with environmental groups, as recently uncovered emails released by E&E Legal show. The emails reveal that Schneiderman’s staff is in near-constant communication with activist groups on a wide range of issues, from coordinating their approaches to court cases to recommending good restaurants. 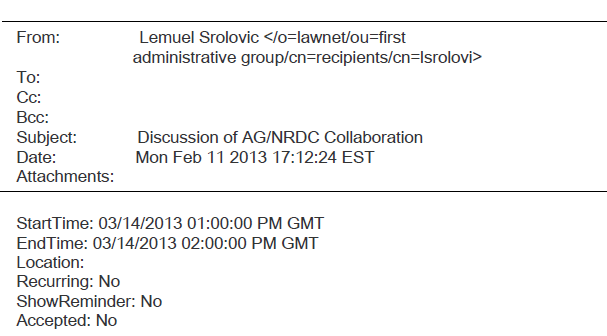 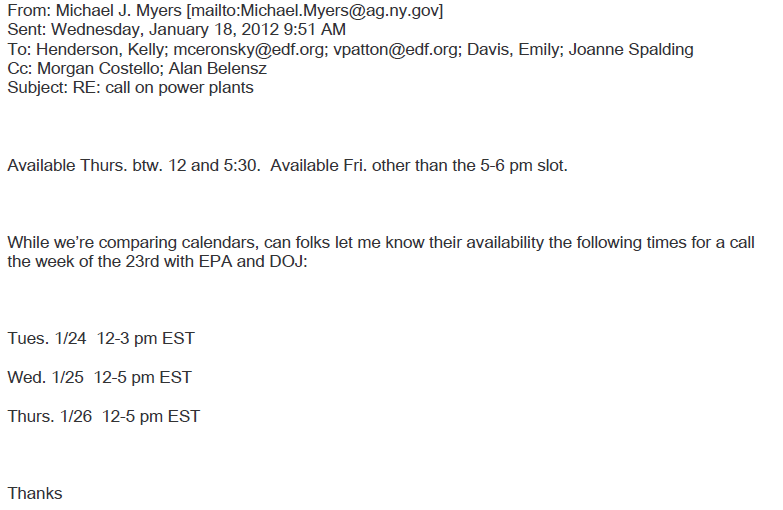 In one characteristic exchange, a Schneiderman staffer solicits a restaurant recommendation for his parents directly from NRDC’s Executive Director (not exactly defying any stereotypes, the NRDC staffer suggests a French restaurant, and a vegan one): 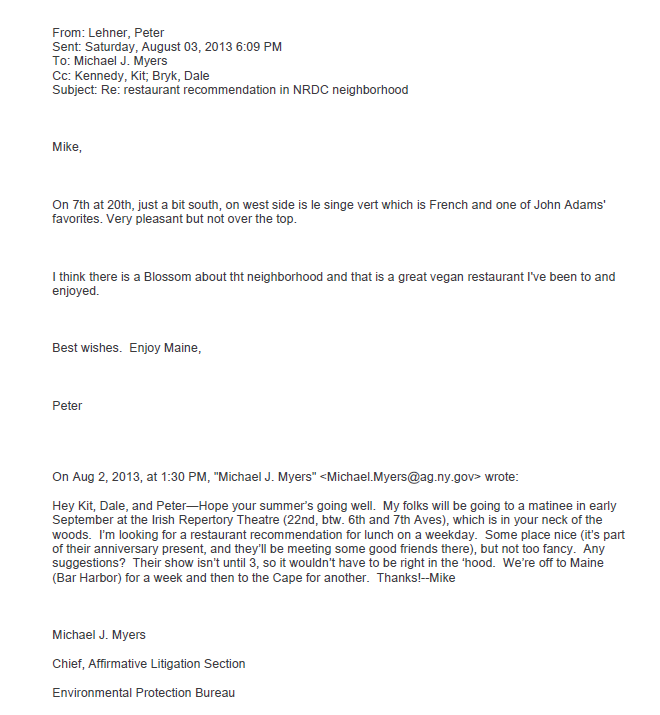 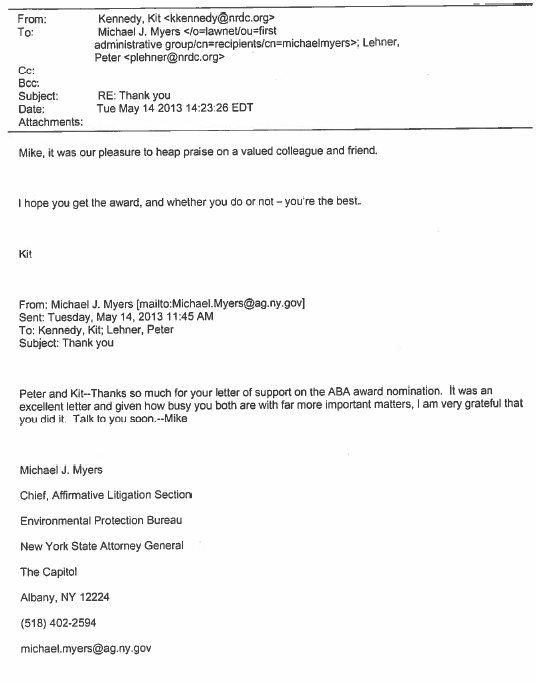 So not only do we have pretty clear evidence of collusion between activists and the AGs launching RICO climate investigations, but Massachusetts AG Maura Healey has openly admitted that her verdict was already in before even filing the investigations.

That sounds more like activism than the practice of the law.