Colorado Rising, the group behind Proposition 112, has repeatedly insisted the measure is a local, grassroots effort that “is absolutely not a ban on the industry.”

But if there were any lingering doubts about Proposition 112’s true purpose – to completely ban oil and gas development in Colorado – and who is actually behind it – national anti-fracking groups – the fact that “Keep It In the Ground” celebrity activist Bill McKibben headlined a dinner and auction in support of Prop 112 tonight in Englewood should put those doubts to rest. 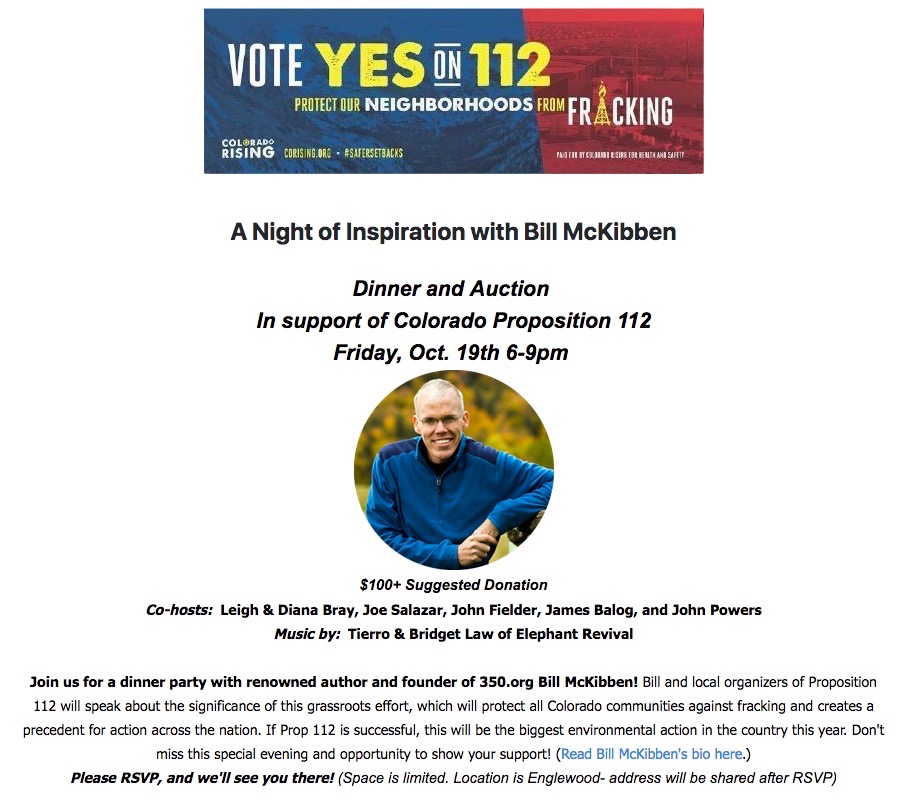 In case you’ve lost count, McKibben is the third major national “Keep It In the Ground” activist Colorado Rising has parachuted into Colorado in the past month alone. As EID previously reported, Gasland Director Josh Fox and New Yorkers Against Fracking founder Sandra Steingraber have also visited Colorado in recent weeks. But more on that in a minute.

To be perfectly clear, these national activists aren’t coming through town to advocate for grassroots efforts aimed at implementing common sense regulations. Their goal is to ban oil and gas development everywhere, plain and simple, and they know that passage of Prop 112 could create the national momentum desperately needed to advance that ultimate objective. The following promotional write-up for this evening’s “Night of Inspiration with Bill McKibben” clearly articulates that fact,

“Join us for a dinner party with renowned author and founder of 350.org Bill McKibben! Bill and local organizers of Proposition 112 will speak about the significance of this grassroots effort, which will protect all Colorado communities against fracking and creates a precedent for action across the nation. If Prop 112 is successful, this will be the biggest environmental action in the country this year. Don’t miss this special evening and opportunity to show your support!”

A Denver resident cheers as Vote No on 112 trucks drive past a “Keep It In the Ground” fundraiser with Vermont-based fringe activist Bill McKibben.

But McKibben is so passionate about Prop 112 that he’ll follow up tonight’s event with a “Prop 112 Pep Rally! Phone bank & Canvass!” Saturday morning in Colorado Springs. 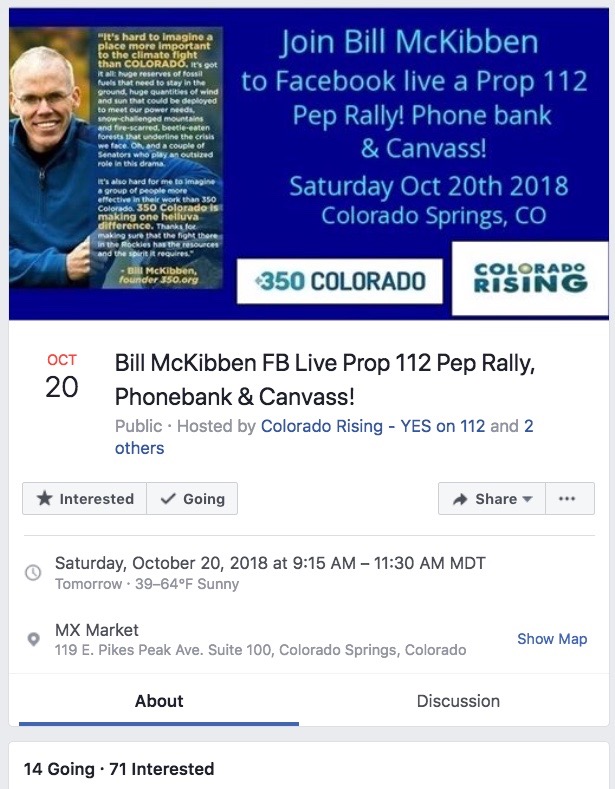 For those unfamiliar with McKibben, he is the co-founder of environmentalist activism group 350.org. Among their top priorities is advocating for an uncompromising 100 percent renewable energy transition. McKibben has previously stated he’s on a mission to “kill” the oil and natural gas industry, and has compared the industry to “the crimes of slavery, totalitarianism, colonialism [and] apartheid” and Nazi Germany.

Suffice it to say, he is not a moderate.

McKibben proposed that the Democratic National Committee include a national fracking ban in its platform in 2016, which the party wisely rejected. McKibben is also known for launching the fossil fuel divestment movement.

Both 350.org and fellow national anti-fracking group Food & Water Watch ($190,000 as of July 20) have donated tens of thousands of dollars to Prop 112’s proponents at Colorado Rising.

These donations from national anti-fracking groups into a statewide Colorado ballot measure shows the disingenuous nature of claims that Prop 112 is a grassroots effort.

McKibben is just the latest in a parade of national anti-fracking activists to travel to Colorado and campaign in support for Prop 112.

Just last month, Josh Fox was in Boulder performing a one-man-show, “The Truth Has Changed.” Remember, Josh Fox is the director of the misleading and decidedly anti-fracking documentary, “Gasland.” EID has done extensive debunks of the claims represented in the film, available here.

After his performance concluded, Fox turned to the audience, spoke in support of Prop 112 and then said, “Let’s do this! Let’s ban fracking in Colorado!” He then tweeted this picture to Democratic gubernatorial candidate Jared Polis:

Hey @jaredpolis– These great folks in Boulder last night at THE TRUTH HAS CHANGED want you to support the truth and vote yes on the fracking #proposition112 to keep our kids safe! #frackingharms. @RepJaredPolis @ColoradoRising @OurRevolution pic.twitter.com/UNB2AeiMAb

Who sponsored Fox’s performance? No other than Colorado Rising. The same group who portends that Prop 112 is simply a common-sense regulation aimed at health and safety, and not a ban on fracking.

The founder of New Yorkers Against Fracking was also in town recently singing Prop 112’s praises. Sara Steingraber was in Denver a few weeks ago promoting her new documentary entitled, “Unfractured.” She encouraged Coloradans to draw inspiration from her own successful fight to ban fracking in her home state.

“I want you to know you’ve captured the whole nation’s attention.”

“What you’re doing here now is being watched by everyone… That’s what we discovered in New York – that when you act heroically, you break a spell of other people who are so caught up in their self-defeatism and despair. And they begin to realize you only have one life – why not be the super hero that our kids think that we are, right?”

“What I discovered is I’m willing to go into jail.”

How did she go about banning fracking in New York? Turns out, she was the peer-reviewer of research that was promoted as “bona fide scientific literature” and used to justify the ban. Only problem is she failed to disclose the very clear and jarring conflicts of interest, violating various codes of conduct in the process.

Add Bill McKibben to the mix and you have three of the most prominent anti-fracking activists pushing for Prop 112. Tells you a little something about what the measure will actually accomplish if it passes, doesn’t it?