Methane Rule Creates New Jobs for Ohio? Not so much.

That old saying, “If at first you don’t succeed, try, try again” seems to be the activist motto when it comes to all things related to oil and gas development. Case in point:  Earthjustice, the Sierra Club, and the Environmental Defense Fund (EDF) have recently recirculated their old talking points around methane to include the notion that additional methane regulations will create jobs. In fact, just this week, the Sierra Club and EDF launched national and Ohio specific campaigns, that used similar talking points, stating that new regulations would “create good jobs”. This is their “new” basis for promoting the national standards for methane regulation, but no matter how the messaging is spun, the facts don’t change. And those facts are that natural gas use and development has already lowered methane emissions across the country.

Now the talking points are shifting to the absurd notion that increased methane regulations will create more jobs.  This is particularly ironic, given that the Sierra Club is simultaneously working on its Beyond Natural Gas campaign, which would kill all jobs related to shale in its entirety. In fact, a recent study outlining a “roadmap” for transitioning to 100 percent renewable energy would actually cause a significant loss of permanent jobs, based on a review by Energy In Depth. Yet, that hasn’t stopped anti-fossil fuel activists, eager to tout the supposed job benefits of replacing oil, natural gas, and coal with renewable technologies like wind and solar, from widely citing the study. As the following chart shows, though, that transition will be detrimental to existing energy employment: 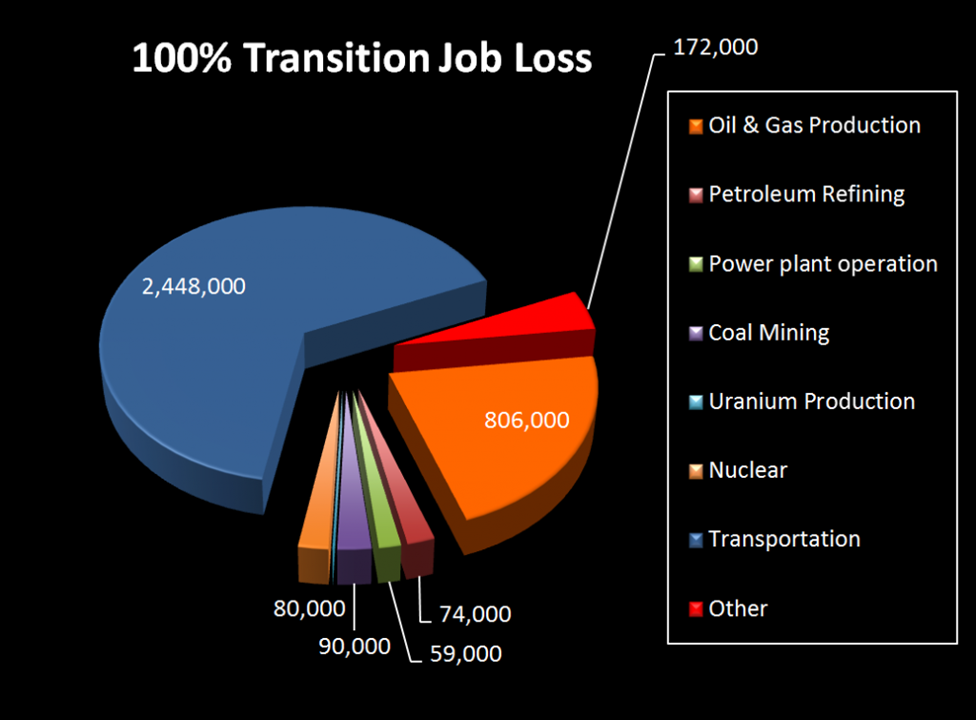 EDF Report on Ohio “Jobs Created” Not Based On Fact

EDF launched and funded a 2014 report entitled “The Emerging U.S. Methane Mitigation Industry” which identified 13 companies that would be so-called job creators from additional methane regulations. The report includes Ohio companies such as Ariel Corporation, and Dearing Compressor as case studies of companies that would benefit from federal regulations of methane. However the report fails to address the fact that these companies are already working with the oil and natural gas industry, as is clearly noted in Ariel’s white paper that specifically addresses the oil and natural gas industry’s voluntary work to move toward a “near zero leakage rate”.  Brad Couch, CNG Business Development Manager at Ariel, recently wrote a blog that stated:

The point is, EDF, the Sierra Club and EarthJustice refuse to admit that the oil and natural gas industry are already utilizing companies, like Ariel Corporation in Ohio, to develop best practices and technology to address fugitive methane. These jobs are not new; they have already been put into play, primarily through voluntary efforts.  Essentially what EDF has done is pull a list of all the companies in Ohio that manufacture or service equipment to mitigate methane and packaged them up into so-called “new jobs” that would be created. That is simply not the case.

The reality is additional EPA regulations are actually hurting Ohio’s economy, especially when combined with the onerous new EPA ozone regulations.  In fact, between the new National Ambient Air Quality Standards (NAAQS) and the national methane regulations, Ohio is facing economic costs, particularly in manufacturing and highway construction related work. While the costs of the methane rule specifically for Ohio are not known, the National Economic Research Associates (NERA), which has also conducted economic analyses for the U.S. Department of Energy, found that the cost of EPA’s methane rules would be as high as $155 million in 2020, or about three times larger than EPA’s projected cost nationwide. The ozone rule has projected costs specifically for Ohio as high as $23 billion in gross state product loss.  In response to the burden of the ozone regulations, the Ohio Environmental Protection Agency (OEPA) stated that they would have a “crippling impact on industrial and manufacturing growth” Expansion plans are postponed and “new businesses look elsewhere due to the extra hurdles and burdens required of companies. State regulators in Ohio went on to say, “scientific evidence demonstrated in this proposal…does not justify the proposed range.”

In other words, these methane regulations can’t be looked at in a vacuum; they work hand-in-glove with the NAAQS efforts as well. And the very industries that buoyed Ohio’s economy through the economic downturn—manufacturing, energy, and construction—will be targeted by these regulations. Bipartisan elected officials, and building and construction trade associations’ councils recently spoke out regarding the NAAQS. Here’s what others are saying about Ohio and EPA’s approach to new regulations, according to a report, entitled, Powering Down: How Washington’s Ozone Plan Will Snuff Out Ohio’s Economy:

“EPA’s proposal for energy is important for future generations. However, these new regulations are moving too far, too fast, too soon. These regulations will prohibit our membership from making a living and our community will continue to experience heavy unemployment issues hindering economic growth.” Butch Taylor, Business Manager, Local Union 396, Plumbers and Pipefitters:

“As a proponent of clean energy, I understand the EPA’s proposals for air quality standards control are important for future generations.  However, now is not the time for such sweeping and stringent policy changes.  Ohio businesses and consumers are struggling with high energy bills which would significantly increase if these changes are implemented.  Moreover, recent extreme global weather patterns underscore the need in Ohio for abundant, reliable, and efficient sources of energy. The move toward renewable energy must be made, but the EPA’s new regulations are far too much too soon. State Representative Sean O’Brien (D), Ranking Member on the Energy & Natural Resources Committee

“The overall impact of these far reaching regulations will result in lower economic growth, more job losses and an even lower standard of living to the Appalachian communities of the three state region that we represent”. Mark Johnson, Business Manager, Tri-State Building Trades Union

“The Affiliated Construction Trades Ohio Foundation (“ACT Ohio”) was created by the Ohio State Building & Construction Trades Council to facilitate industrial development and promote industry best practices for Ohio’s public works and private construction. In recent years, ozone emissions have dramatically decreased in Ohio, to the benefit of all our residents. However, ACT Ohio vehemently opposes any efforts to halt federal funding for Ohio’s highway, transit or infrastructure development initiatives. On behalf of our 92,000 members, and their families, ACT Ohio urges regulators to balance compliance standards with economic development, job creation and retention.” Matthew A. Szollosi, Executive Director, ACT Ohio

The bottom line is this: new federal EPA regulations, like methane and ozone, simply do not create jobs, and impede on work already being done by states.

Activists Use Methane Regulations As Cover For Real Agenda: To Ban Fracking

The proposed methane regulations and groups that support them, which include many outside the mainstream activist groups, including EarthJustice and the Sierra Club, have made it clear that their goal is to stop all oil and natural gas development in Ohio, not to simply regulate methane. For example, according to their website in response to the New York ban on hydraulic fracturing EarthJustice responded with,

“Make no mistake—this is just the beginning. What happened in New York can happen anywhere. In fact, it already is.”

The Sierra Club is currently running a national campaign set out to end natural gas development as part of its “Beyond Natural Gas” campaign. According to Sierra Club’s campaign against natural gas website,

“Fracking for natural gas damages the land, pollutes water and air, and causes illness in surrounding communities. It is also a major threat to our climate. It is clear that we cannot transition from one fossil fuel to another and expect to see major climate benefits. We need to move beyond natural gas.”

So while these groups are trying to play the jobs card to sell more regulations, in Ohio these “new jobs” for methane mitigation are already in fact in existence, thanks to voluntary efforts by the oil and natural gas industry. In reality, the Sierra Club and EarthJustice have one goal— and that is to fundamentally and completely abolish all development of oil and natural gas, which has created thousands of jobs for Ohioans and as of April 10th, the Ohio Department of Jobs and Family Services posted 171,840  available jobs in Ohio that have links to the keywords “oil and gas”.