The Energy Information Administration (EIA) released data today that show monthly U.S. crude oil production surpassed 11 million barrels per day (p/d) for the first time time ever in August. This volume of production is more than double the level of crude oil produced by the U.S. in 2008 and confirms earlier predictions from the EIA that the U.S. would overtake Russia to become the world’s top crude producer this year: 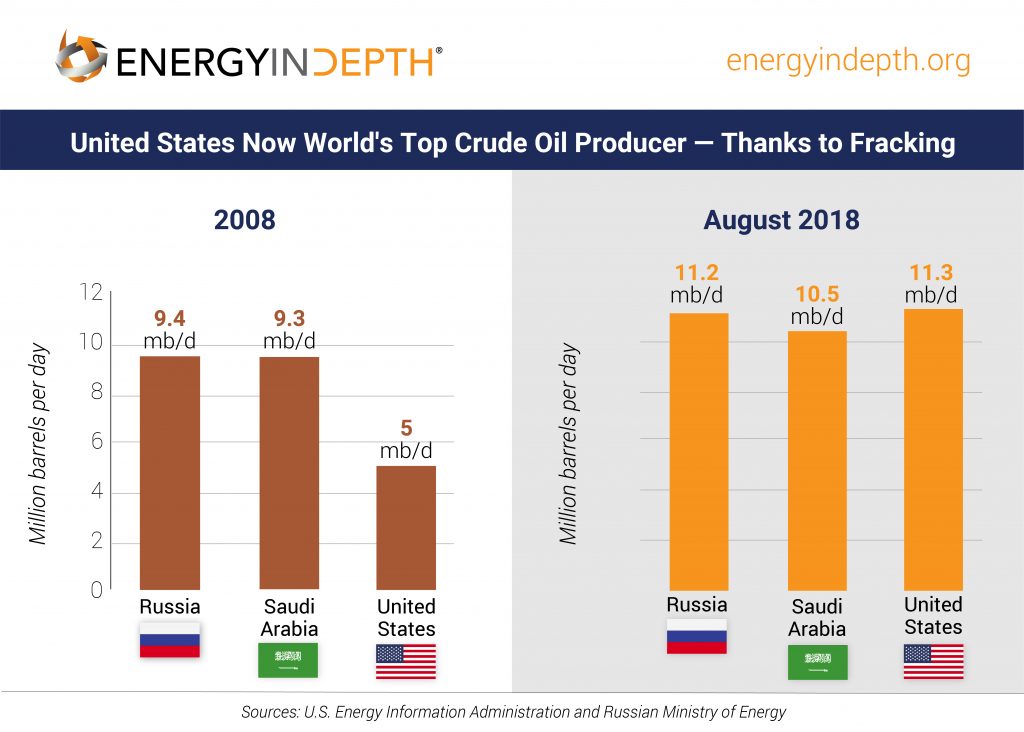 Of course, U.S. oil and natural gas production is surging thanks to advancements in horizontal drilling and hydraulic fracturing. In fact, the EIA notes the remarkable increases in U.S. crude oil production since 2008 can be attributed almost entirely to “tight” oil development: 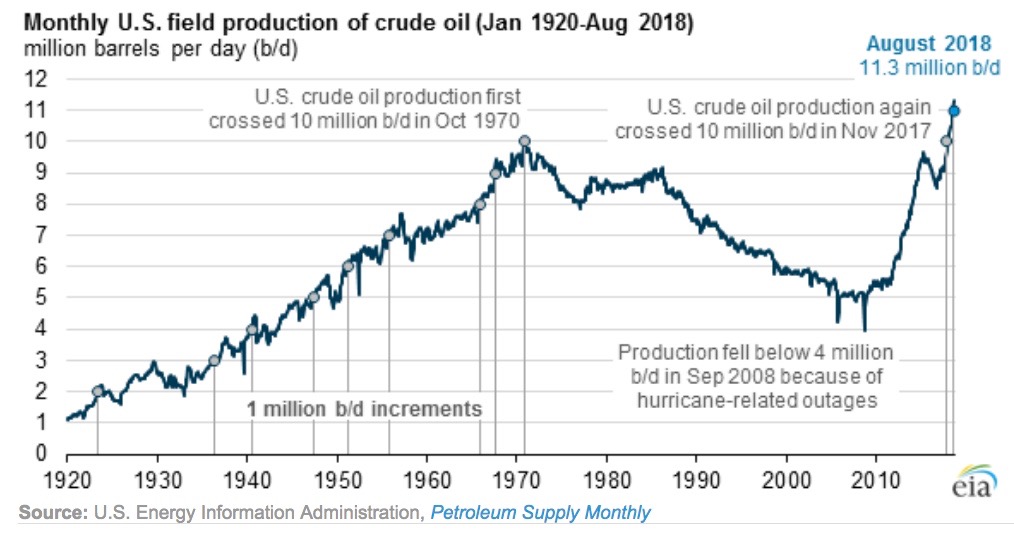 The EIA also shows how today’s production has rapidly recovered from a low point in the early 2000s and has now surpassed previous historical highs.

U.S. crude oil production also realized the “largest year-on-year output increase in its history” in August, according to Bloomberg, surging 2.1 million b/d from August 2017 levels. Much of this dramatic growth came is a response to the increase in prices:

“Oil companies boosted shale drilling in Texas, Colorado, and other states in response to a 48 percent rally in prices. U.S. Gulf of Mexico production hit a record high, as did New Mexico, which has benefited from massive growth in the Permian basin.”

EIA notes that greater-than-expected production from the mighty Permian Basin in Texas and New Mexico has spearheaded overall production gains and pushed the Lone Star State and Land of Enchantment production levels to a record 4.6 million b/d and 724,000 b/d in August, respectively:

“The growth in Texas and New Mexico since the start of 2018 surpassed EIA’s previous expectations, which assumed that pipeline capacity constraints in the Permian region would dampen production growth in response to the increased differential between the West Texas Intermediate (WTI) crude oil price at Cushing, Oklahoma, and the WTI price at Midland, Texas. In August 2018, this differential had grown to more than $16 per barrel (b), up from $0.43/b in January. However, industry efficiencies in pipeline utilization and increased trucking and rail transport in the region have allowed crude oil production to continue to grow at a higher rate than EIA expected.”

But the Permian isn’t the only major tight oil play seeing record production. Texas’ Eagle Ford is in the midst of a full-on resurgence, while the Bakken Shale and Anadarko and Denver-Julesburg basins have pushed North Dakota (1.3 million b/d), Oklahoma (563,000 b/d) and Colorado (477,000 b/d) to monthly oil production levels as well. 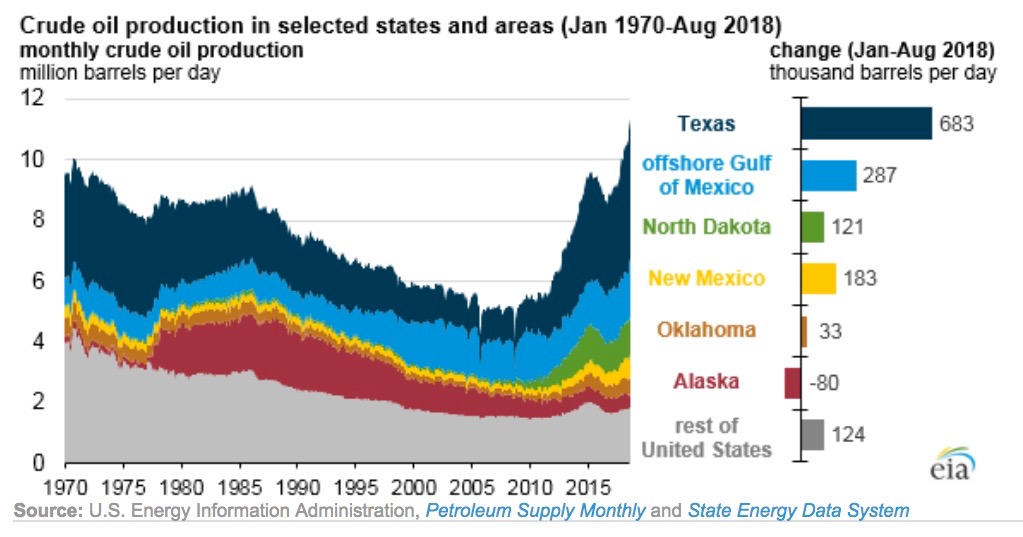 Bloomberg also noted the positive impact the increased oil production is having on American energy security and reducing our trade deficit.

“The supply surge is increasingly finding a home overseas, as U.S. refiners reach the maximum they can handle of the light, low sulfur oil coming from shale plays. Net crude and refined fuel imports sank to a record low 1.2 million barrels a day last week, and may fall to zero as soon as next year.” (emphasis added)

This is one of several reasons why the EIA believes that the U.S. will be a net energy exporter by 2022.

This positive trend is also set to continue into 2019, as the EIA is forecasting even higher levels of crude oil production with a potential average of 11.8 million barrels per day in 2019, significantly up from the 9.4 barrel per day average established in 2017.

Just seven years after former President Obama said “we can’t just drill our way out of the problem” of dwindling domestic production and increased reliance on OPEC imports, the technological advances in horizontal drilling used in conjunction with hydraulic fracturing has completely flipped the script and returned the U.S. to the world’s top oil producer – and there is more growth around the corner!