More Scary Headlines from ALA? Or Have They Learned from Their Troubles Past?

The American Lung Association (ALA) will likely make a few headlines today based on the release of its 2018 “State of the Air” report. But by now it should be clear that the ALA’s report should be viewed with a high level of caution and even skepticism.

Not only has Energy in Depth pushed back on ALA’s numbers over the years (examples here and here), state regulators from numerous states have pushed back on the numbers and methodology used in the report. Hopefully the group has learned from embarrassing mistakes in the past. But based on EID’s initial review of the report, we won’t be holding our breath.

For instance, the new ALA report claims that, “ozone pollution worsened significantly in 2014-2016 compared to the previous report,” even though the latest EPA data show that ozone levels only slightly increased from 2014 to 2016, remaining below federal limits.

A Reason For Hope?

Despite ALA’s predictably alarmist topline conclusions, the report actually concedes that U.S. air quality has improved significantly since its last report. ALA’s new report finds “… the number of people exposed to unhealthful air remains still far below the 166 million in the years covered in the 2016 report (2012-2014).”

Notably, the most recent EPA data show that the two primary ozone precursors — nitrogen oxide (NOx) and volatile organic compounds (VOC) — have decreased 49 and 15 percent respectively since 2005, while fine particulate matter emissions have declined 32 percent. That same data show ozone concentrations have decreased 22 percent during that timespan. These trends can be traced at least partially to the fact that natural gas consumption has increased 25 percent since 2005. Natural gas emits far less NOx when burned than other traditional fuels. 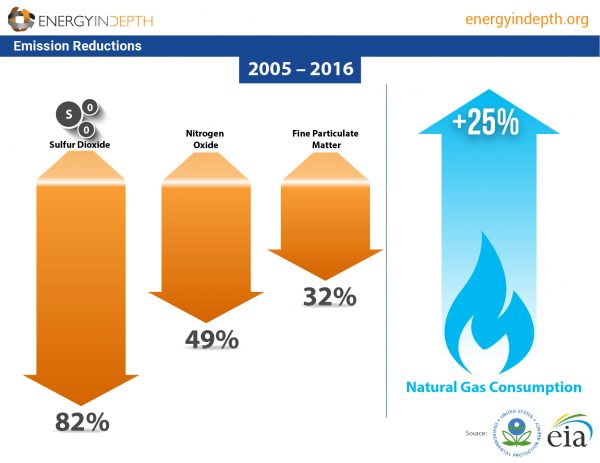