Most Outrageous Anti-Fracking Stunts of 2015

With the end of the year upon us, it’s time to look back at the most outrageous things “ban fracking” activists said or did in 2015. Strap in, because some of these are doozies.

#1 Fracktivists arrested while pretending to be Santa and the Grinch

Just in time for Christmas, a group of fracktivists dressed in full holiday garb – including two dressed as Santa and the Grinch, were arrested for an attention-seeking stunt that involved trespassing while protesting Crestwood Energy in New York. The group organizing the protest – which is supported by extremist Sandra Steingraber (more on her below)– stayed in character and welcomed arrest, one protester dressed as Santa telling police officers “my home is melting” which relates to fracking (or climate change)…in no possible way.

Steingraber even played along with the childish PR stunt, tweeting the absurd ultimatum of “Fossil fuels or Xmas. You choose. We’re dying [sic.].”

Acts like this not only show a lack of respect for the Crestwood workers who were blocked by protesters, but also a lack of respect for law enforcement who would otherwise be doing important things in the community rather than babysitting protesters convinced they speak on behalf of Santa and the elves. Pro tip for activists: when you use Santa dancing with the Grinch to convey your message, even you aren’t taking that message seriously.

#2 Driving a gas guzzling tank to an anti-fracking rally

British fashion designer Vivienne Westwood may have lost the plot a bit when she attempted to protest fracking in England by driving a tank to the house of British Prime Minister David Cameron. Calling the protest a fake “chemical attack”, any commentary from Westwood on fracking in relation to air pollution was muted by the fact that she was driving a tank that gets 0.6 miles per gallon in ideal conditions. Surely a fashion designer should understand optics. 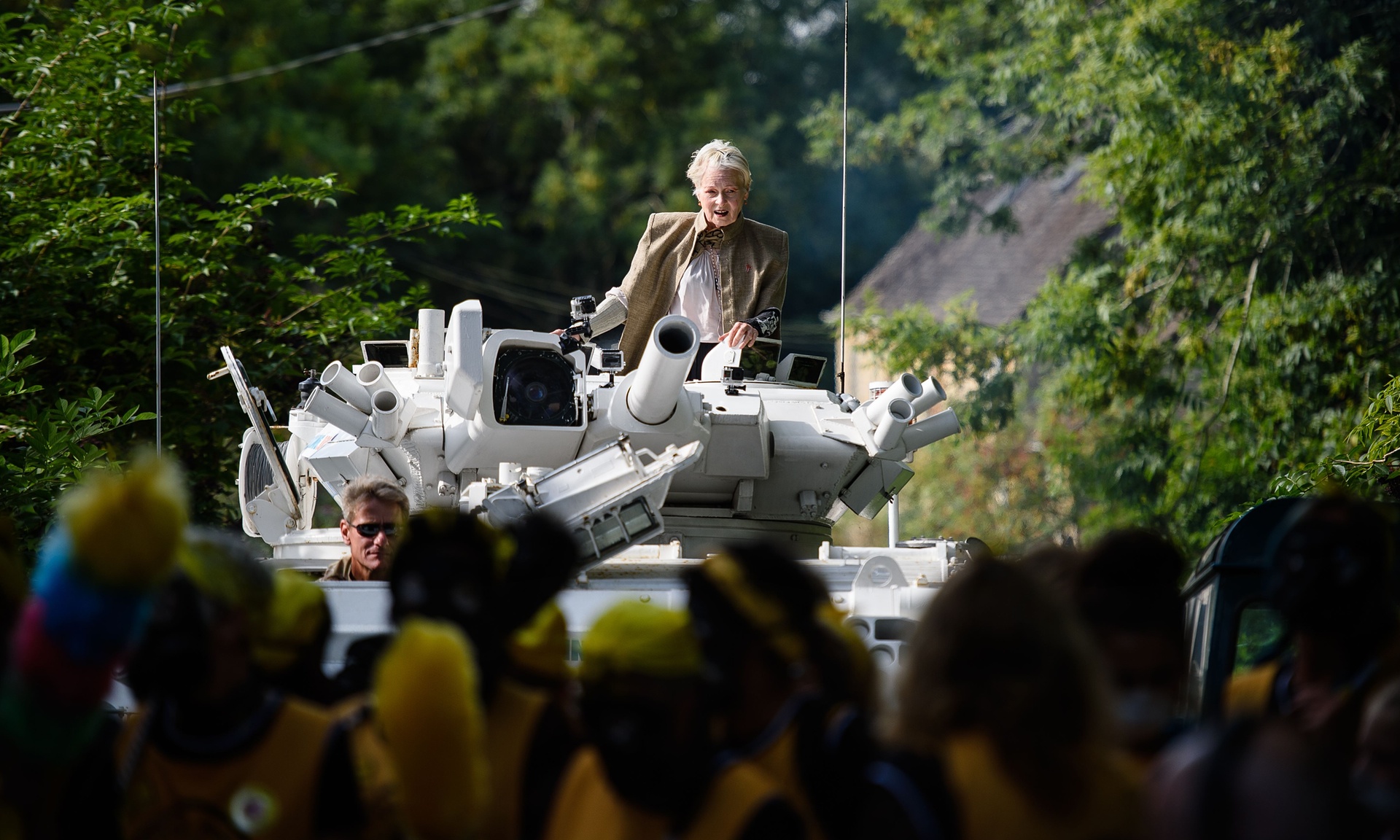 To spread that message that people should fear, rather than embrace, fracking, activists   in protested GreenHunter, a reinjection company, by dressing up in black and painting their faces like skulls. Armed with signs painted like gravestones, the fracktivists held a rally to “add to the Halloween ambiance” at Meigs County injection wells to let those in the “fracking industry” know they mean business! Nothing gets that message across like dressing up for trick-or-treating. Will there be an anti-fracking Easter Bunny? Stay tuned!

#4 Inserting the anti-fracking agenda into the Pope’s visit because…?

When Pope Francis visited the US earlier this fall, the media and much of the country, was buzzing with anticipation. Anti-fracking activists jumped at the chance to link the visit of a religious leader to their pet ideological cause.

One of the more silly (albeit, strangely entertaining) tactics included a group of self-proclaimed “Friars Against Fracking” from Saint Mary’s parish in Pompton Lakes, NJ, singing “stop fracking now” in Gregorian plainchant and then breaking into a rap. Their sentiments included “fracking is a lot like crack cocaine” and “drilling is killing,” neither of which make any sense whatsoever or bear any relationship to the truth. But, as we noted, entertaining. We don’t generally expect to get good science from music lyrics, anyway.

A more potentially offensive and far less creative strategy from fractivists was dressing up (yet again) as the Pope and editing Bible verses to match their anti-fracking agenda. For example, one protester reworded Psalm 34, which includes “The Lord hears the cry of the poor” to “Hear the cry of the Earth and the cry of the poor”. But let’s forget that low natural gas prices from fracking have helped all families, especially lower-income families, by significantly dropping monthly energy bills while reducing CO2 emissions, so we think the Earth, and those of lower incomes, are probably happier. 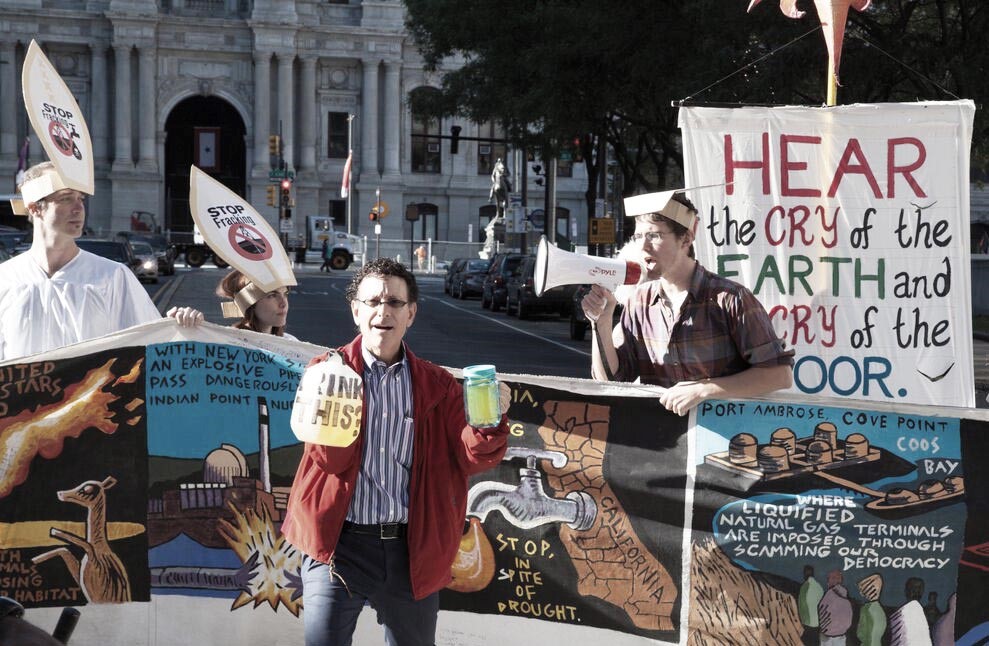 This claim is so outlandish and offensive that we debated whether it should even be acknowledged.

What kind of mind would even come up with such a distasteful claim? A fracktivist mind, of course. This one belongs a Texas-based activist named Sharon Wilson who published a blog post called “Texas fracking rape”. Wilson’s employer, fringe activist group Earthworks, approvingly retweeted the blog post and various other anti-fracking activists across Texas echoed Wilson’s statement.

Beyond its enormous insensitivity to the reality of rape and the suffering of its survivors, this obscene assertion, with its extreme rhetoric and lack of any scientific (or moral) underpinning, demonstrates how far the anti-fracking movement has veered from being anything resembling a credible participant in the public policy debate. Unfortunately, as we will see below, the movement’s disrespect for women was not limited to this single instance.

#6 Saying women can only be “hotel maids or prostitutes”

Believe it or not, it just gets more absurd. At least when anti-fracking activists don’t hold back we get to see their true colors.

Prominent “ban fracking” activist Sandra Steingraber, (amazingly) one of the peer reviewers on a “study” New York regulators used to justify a ban on fracking and who in past years as compared fracking to the Holocaust and slavery recently claimed that the only jobs for women in oil and gas development are as “hotel maids or prostitutes”. Steingraber, in the same lecture, stated that “95 percent of people employed in gas fields are men”.

This is what is known as an epic fail. As it happens, Steingraber is wildly incorrect — not to mention offensive — on both accounts. A recent report from the American Petroleum Institute found that, in 2010, women accounted for 226,000 oil, gas and petrochemical industry jobs – that’s 19 percent of the industry and we hope that number increases in the future.

Almost comically, Steingraber made these remarks during a lecture at the University of Pittsburgh called “Fracking is a Feminist Issue: Women Confronting Fossil Fuels and Petrochemicals in an Age of Climate Change Emergency”. Trying to take well-paying jobs from over 226,000 women and believing that they could only be “hotel maids or prostitutes” doesn’t sound very “feminist”, now does it?

Yep, Sharon Wilson went there too.

2015 was a year scarred by terrorist attacks in Paris, San Bernardino, and across the world. These events have put much of the public on guard and have generated serious concerns regarding how well citizens are protected. But, not missing a chance to exploit a tragedy to promote an ideological agenda, Earthworks’ Sharon Wilson, who months earlier minimized the horror of rape (see above), saw it fitting to compare fracking to “domestic terrorism”.

This is contemptible as it not only demonizes the hardworking men and women in the oil and gas industry but it exploits the fear generated by, and trivializes the tragic consequences of, the actual acts of terrorism that impacted so many lives this year.

#8 Calling other fracktivists to “Fill up jails”!

The Community Environmental Legal Defense Fund (CELDF) took its rhetoric to the next level in 2015. Thomas Linzey, founder of the group, said that activists should “ratchet up” civil disobedience and begin “filling up jails”.

Linzey is quoted in a recent interview as saying:

“Well, I think it means thinking about civil disobedience differently than we’ve thought about it before. So it’s not just to make a moral or ethical statement; it’s actually aimed at stopping the project itself. And that means, I think, successive days. It means rotating people through. It means bringing people in from other places. It means filling up jails”

“I mean, our resistance has to ratchet up, the opposition has to ratchet up our stuff to a point where it’s actually actively interfering with these projects, because if you don’t do that and you rely entirely on the legal process and the legal process is so stacked against you in terms of what municipalities can and can’t do, that at that point you have no other option but to engage in that type of action”

While talk of “ratcheting up” in an extra-legal context could be viewed as threatening, it would also divert resources from law enforcement officials who are trying to protect the public. Civil disobedience has a noble history but surely there are better uses for it than trying to deny Americans affordable energy. Right?

Activists are actively trying to destroy jobs and innovation, cripple the economy and even increase greenhouse gas emissions, and even though this year their claims tended to be more offensive than funny, during the holidays EID still tries to find a little humor in the lengths that they will go to attempt to achieve these ends.

While activists were making their outlandish and objectively false assertions, in 2015 the oil and gas industry continued to make positive contributions to the environment and the economy. Just a few examples include further proof that fracking does not cause systemic water contamination, the billions of dollars oil and natural gas development pumps into the Texas education system, the lowest gas prices in seven years, or the decrease in greenhouse gas emissions thanks to cleaner burning natural gas.

Everyone at EID wishes you and yours a happy holiday season and a safe and prosperous 2016!