Canadians feel the oil and gas industry is valued and important, according to recent polls including one in Quebec, which has had a fracking ban since 2018. The Quebec survey showed Quebecers’ prefer domestic natural gas production over importing the fuel, and another survey revealed that across various political ideologies, a majority of Canadians support the domestic oil and natural gas industry.

Both surveys, released earlier this month, come at a time when Canadians are looking for economic relief from several months of turmoil due to the COVID-19 pandemic.

The Montreal Economic Institute (MEI), a Quebec-based public policy think tank, asked Quebecers how they feel about importing energy resources rather than developing resources domestically. Overwhelmingly, 71 percent of Quebecers said they would rather import oil from Western Canada, as opposed to foreign oil.

Germain Belzile, a Senior Associate Researcher with the MEI, said that over time public support for domestic energy industries continues to grow, but goes unnoticed by the province’s politicians:

“Western oil and developing their own resources are both more popular this year among Quebecers. But while Quebecers are frankly very open to the development of their oil resources, the province’s political parties don’t feel the same enthusiasm. There’s a disconnect.”

MEI’s survey, which was conducted by the French marketing research company Ipsos, conveyed several other compelling trends on Quebecers’ opinions toward domestic oil development. When asked if they would support oil development within the province, half (50 percent) of Quebecers said yes, with only 26 percent opposed to the idea and 24 percent saying they were undecided.

Furthermore, when asked about the safest means of transporting oil throughout the country, 49 percent of Quebecers felt that pipelines were the safest option, followed by 13 percent stating rail transport.

Oil and Natural Gas is Important to the Canadian Economy

Canada’s political parties vary drastically when it comes to policy issues, especially on energy and the climate. However, a research program with the University of Ottawa recently found that when it comes to the domestic oil and natural gas industry, most Canadians agree that it is important to the economy.

This consensus among Canadians was across the board, regardless of party affiliation, ideology, region, gender, or age. 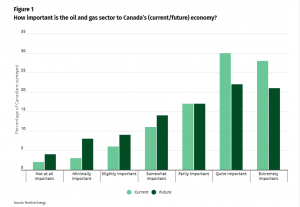 Researchers also divided survey respondents by political ideology. What they found was that at the farthest ends of the political spectrum, Canadians were the most divided in terms of how important they view the oil and natural gas industry is to the economy today and in the future. However, moderate Canadians overwhelmingly still felt that the industry is important to the economy, making up the majority. 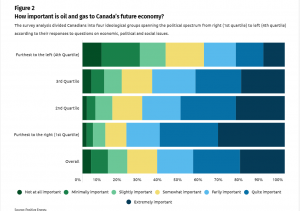 Overall, the survey results conclude Canadians generally see the economic value of the oil and natural gas industry. While there were stark differences among Canadians at the furthest ends of the political spectrum, a majority of Canadians recognized the value and importance of the industry to the economy.

With the uncertainties of COVID-19 being felt across Canada, these new survey results reflect the growing inclination amongst Canadians toward oil and natural gas development. Quebecers, who are aware of the emissions policies within the country, overwhelmingly prefer to consume Canadian oil over foreign oil. Meanwhile, most Canadians agree that the oil and natural gas industry is a significant contributor to the Canadian economy and will be in the future.