National “Keep It In the Ground” (KIITG) groups quickly pounced on the news that the ban-fracking measure known as Initiative 97 officially made the ballot for this November’s election in Colorado.

Groups such as 350.org and Food & Water Watch (F&WW) raced to issue press releases and Facebook posts showing their commitment to get to work on supporting this extreme measure.

For example, Washington, D.C.-based F&WW released a statement praising the measure and promising to “get to work” to make sure it passes:

“We are delighted that Colorado voters will get the opportunity to protect their families from toxic fracking. Coloradans should not be subjected to the health hazards of oil and gas operations near their homes, schools, hospitals or parks. This campaign is driven by dedicated volunteers and grassroots power and we are eager to get to work to help pass this initiative.”

Recall national KIITG groups like 350.org are leading proponents of fossil fuel divestment campaigns on college campuses in the state and are closely aligned with the City and County of Boulder’s efforts to sue energy producers in Colorado.

Of course, those paying close attention to the ban-fracking campaign in Colorado already knew that F&WW is more than just “ready” to work. In fact, they’ve been working on supporting Initiative 97 – which would increase setbacks from 500 to 2,500 feet – for months. As of July 20, 2018, the group has donated $190,000 to Colorado Rising, and back in May was certified by the State of Colorado to gather signatures for the petition. Gathering signatures is a notoriously costly endeavor, so having national money at one’s disposal is certainly an advantage.

But now that it’s officially on the ballot, we can expect a full court press. Colorado Rising, 350 Boulder County and Boulder Earth have already teamed up to schedule a so-called “Safer Setbacks from Fracking: Next Steps to Victory!” event for Sept. 13. According to a Colorado Rising Facebook post, attendees will be schooled on “letters to the editor, social media campaigning, canvassing, house parties and more.” 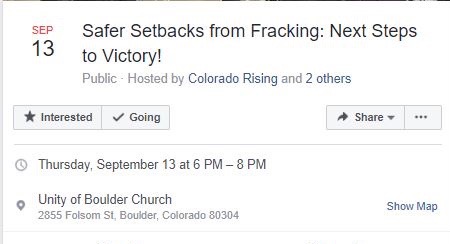 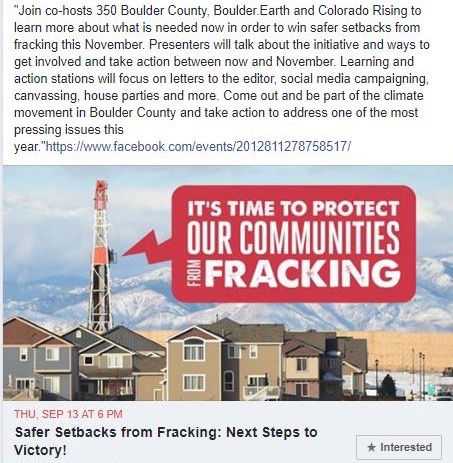 While national activists advocate for a 2,500 feet buffer zone, Colorado voters should be concerned that the campaign is being run out of an office 2,500 miles away. Technically 2,500 kilometers would be more accurate, but you catch our drift.

This isn’t the first time F&WW has tried to ban fracking in Colorado. Back in 2015, the group organized under “Coloradans Against Fracking,” pushing for a statewide oil and gas development ban. Their support of Initiative 97 exposes the measure for what it really is: an attempt to shut down the oil and natural gas industry in the state.

Let’s not forget that the passage of Initiative 97 would put about 85 percent of non-public land off limits for oil and natural gas operations. A recent report finds that financial losses associated with Initiative 97 could top $141 billion from 2019 to 2030.

But that’s of no concern to F&WW, a group so extreme that its positions put them on the fringe of the environmental movement. The group has sparred with everyone from the Environmental Defense Fund to the Obama Administration to California Governor Jerry Brown in its quest to unequivocally shut down fracking.

But Colorado’s energy producers are not mincing words about the impacts that Initiative 97 would have on the state – which relies on oil and natural gas production for about $32 billion in economic output annually.

Colorado Petroleum Council Executive Director Tracee Bentley pointed out how economically devastating the measure would be for Coloradans in this statement:

“…this measure, if ultimately enacted, will define our state’s economy and job opportunities for generations to come. If passed, Initiative 97 could devastate the economic livelihood of hundreds of thousands of Coloradans, both in and out of the energy industry. Entire communities would involuntarily find themselves closed for business. Tax revenues would plummet, crippling essential funding for education and health care across the state.”

And Dan Haley, President of the Colorado Oil and Gas Association, echoed those sentiments while emphasizing the important role energy producers have in funding necessary services:

“Coloradans need to know exactly what is at stake: private property rights, more than 100,000 good paying jobs, more than $1 billion in taxes for schools, parks and libraries, and our nation’s energy security. A half-mile setback is a blatant attempt by activists to ban oil and natural gas in Colorado and put working families on the unemployment line.”

Though big national green groups seem to like Initiative 97, you won’t find many supporters in Colorado. Both gubernatorial candidates, Treasurer Walker Stapleton (R) and Congressman Jared Polis (D), oppose the measure. So do current governor John Hickenlooper and former attorney general and Interior Secretary Ken Salazar. Even environmental groups like Conservation Colorado have chosen to sit this one out.

Maybe this time around, instead of letting DC-based KIITG groups with big money decide what’s best for Colorado, Coloradans should be able to decide for themselves.