Nationwide Oil and Gas Reserves Rise Thanks to Shale

Americans have many reasons to be grateful this holiday season thanks to an abundance of natural resources nationwide. According to a new report released by the Energy Information Administration (EIA) this week there has been a record increase in oil land gas reserves, which are calculated based on the proven probability of extraction “under existing economic and operating conditions.” Thanks to the safe and efficient proliferation of hydraulic fracturing nationwide, natural gas reserves are at a record high and oil reserves are at the highest since 1972.

The increases were driven by production from shale plays across the country. According to EIA, in 2014 production of crude oil and lease condensate increased about 17 percent and gas output increased 6 percent.

When it comes to natural gas, the Marcellus and Utica shale plays in the Appalachian Basin continue to lead the country. Pennsylvania added 10 trillion cubic feet (tcf) of proved gas reserves, the most of any area in the U.S., while Ohio more than doubled its proved natural gas reserves and West Virginia surpassed Wyoming and Colorado to become the 4th largest gas reserves state.

Everything is Bigger in Texas

According to the data, Texas accounts for more than half of proven reserves in the U.S. in 2014 – or 60 percent – thanks to continued development of areas such as the Permian Basin and Eagle Ford Shale. From the report:

“Texas added 2.1 billion barrels of crude oil and lease condensate proved reserves (the largest increase of any state in 2014), mostly located within the Texas portion of the Permian Basin and the Eagle Ford Shale play.” 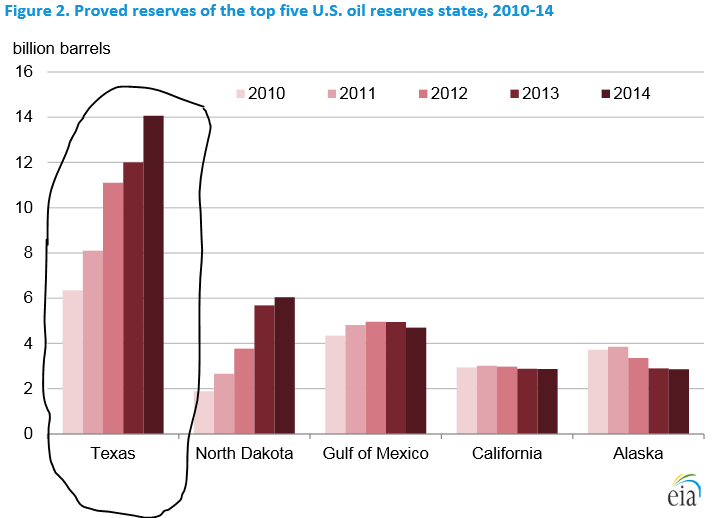 As EID previously reported, the Permian Basin has been a “shining star” in the state’s fracking revolution due to its increased production in the face of declining production statewide. And EIA’s just-released data shows the Permian Basin isn’t just a shining star for Texas, but also makes up an incredible percentage of the reserves nationwide. According to the data:

There is good news for the Eagle Ford Shale as well. Out of a 4.7 Tcf increase in natural gas reserves statewide, the Eagle Ford’s net revision was 3.3 Tcf.

And reserves are not the only thing bigger in Texas. EIA released data in October that shows Texas is leading the way in reducing CO2 emissions by 22.3 percent since 2000—all while continuing to grow reserves. These two blessings are not mutually exclusive as shale gas plays a primary role in reducing greenhouse gas emissions, and continued natural gas development is essential to maintain the this trend of decreasing the state’s CO2 emissions per capita.

As we pause to show our gratitude this Thanksgiving, be sure to take a moment to acknowledge the true blessing we have in the ability to harvest these natural resources safely and responsibly.