Anti natural gas activist Vera Scroggins played the “crying wolf” gimmick last week by calling the Pennsylvania Department of Environmental Protection (DEP) to complain of smells she believed to be from nearby flaring.  DEP responded immediately and found…nothing.

Vera Scroggins, a well-known and outspoken opponent of natural gas development in Susquehanna County, Pa., along with Craig Stevens, another well-known local activist, sent the Pennsylvania DEP on a wild goose chase Sunday morning over smells Scroggins claimed to be the result of a nearby flaring of a natural gas well.  When DEP responded, calling back within 15 minutes and arriving within an hour, they found nothing out of the ordinary – not by smell or by use of special equipment they employed to test the air for contaminants.

Scroggins had this to say about the interaction:

Taped 11-4-12. Loud Flaring started on MacGeorge Gas Site 3,000 ‘ from us on 11-4-12 and I called the DEP Emergency Response number to test something for possible gases since I smelled some odors. Their emergency number is 570 826-2511. They called back within 15 mins. and came to test by 11:15 am. and found no gases such as CO, Hydrogen Sulfides and tested for Oxygen and LEL levels; all normal and then tested the gas site where there are three flares and all normal. Today it is still flaring on the 5th and loud throughout the neighborhood. I saw the three flames above the tree lines last night. 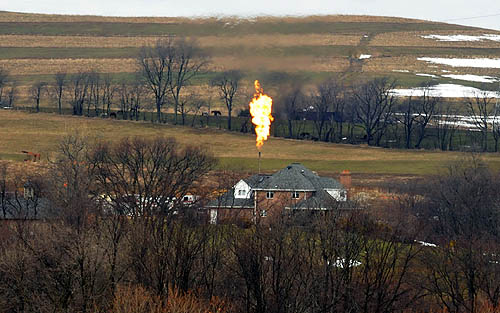 On the one hand, one has to be pleased to learn the DEP responded so quickly, sending their emergency response team to test the air quality in the area, despite the call coming from a complainant who clearly has an agenda and simply saw an opportunity.  It is also comforting to know their tests showed there was, and is, nothing of concern being released from the flaring of wells in our area.

On the other hand, one has to wonder how much of our taxpayer money is spent needlessly investigating complaints such as the ones made by Scroggins in the below video.  How much did it cost taxpayers to send two representatives on a Sunday to Susquehanna County only to find nothing wrong?  How much did we all spend to provide them an opportunity to film an investigation?

Well, you know what – it was worth it.  Why?  Because Vera proved DEP promptly investigates every complaint they receive, demonstrating beyond any doubt that the agency does have the resources and capability to  provide oversight of natural gas development – and does so effectively.

What Occurred During the Investigation?

DEP officials describe, in the first minute of the video, who they are and what they will be testing for:

(1:34) Scroggins reveals her agenda by asking DEP representatives if she and Stevens can accompany them on the well site where she knows she is not permitted to trespass.  She then goes on to say the EPA let her go with them.  Oh, really?  While DEP has permission to inspect a well site at any time, unannounced as they did on Sunday, for safety and security reasons, the average person does not and neither EPA nor DEP have the legal authority to extend their privileges to others with no enforcement responsibilities.

(4:00) DEP officials repeat what they tested for and declare “everything is normal” in the air quality around Scroggins’ property.

(6:06) Stevens then questions the DEP air quality specialists on the recent water testing accusations made by Representative Jesse White against the agency.   We’ve covered this extensively here and here.  If anyone needs further evidence of the agenda behind this whole episode, here it is.  Isn’t it also just a bit strange a complaintant such as Vera needs an orchestrator such as Craig?

Perhaps the smell worrying Scroggins was the dog poop she warned officials about (3:17). Who knows what she smelled?  But here’s what we do know – the scientific testing done by DEP proves it wasn’t from the natural gas well site and flaring activity up the road, and DEP treats every complaint as a legitimate potential issue demanding their attention.  Thanks for the confirmations, Vera and Craig!