Canadians are consuming more, but producing less natural gas in recent years, according to a recent analysis of U.S. Energy Information Administration data conducted by the Canadian Energy Centre.

Canadian energy demand, due in-large part to the country’s geographical location and harsh winters, drastically varies throughout the year. The need to provide power and heat to Canadians during all types of weather underlines how important energy security is for the country. Over 50 percent of homes in Canada are heated by natural gas.

Natural gas is a prominent source of energy used to heat millions of homes across North America. However, with the Canadian natural gas industry facing stricter regulations over the past two decades, Canada has become more dependent on importing the resource from other top-producing nations.

Canadians Are Consuming More Natural Gas Than 18 Years Ago 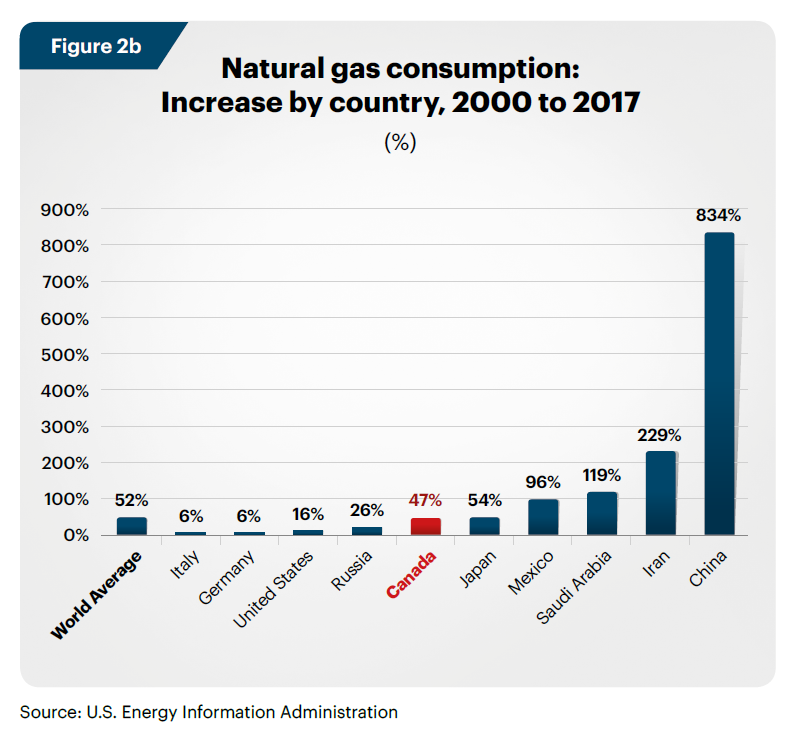 Among the top 10 natural gas producing nations in the world in 2017, Canada was the only country that saw a decrease in its natural gas production relative to 2000. Canada’s total natural gas output in 2000 capped out at around 6,470 billion cubic feet (bcf). Nearly two decades later, Canada produced nearly 900 bcf less with an output of 5,618 bcf. 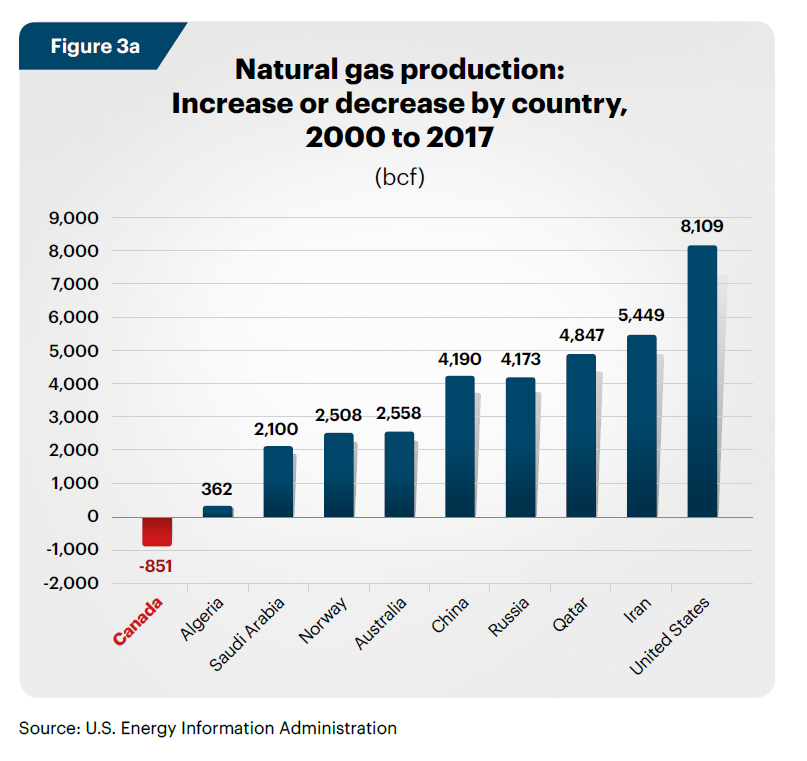 A main component of Canada’s decreased natural gas production stems from increased federal regulations on methane emissions, a byproduct of natural gas extraction. In 2018, the federal government of Canada enacted some of the world’s most stringent regulations on fugitive leaks from equipment and limitations on venting from facilities.

These regulations, coupled with other factors like lower natural gas prices, have led to production cuts.

The net result is from 2000 to 2017, Canada has exponentially increased the amount of natural gas it brings in from other countries.  Canada’s domestic trends have a substantial impact on the global energy marketplace. 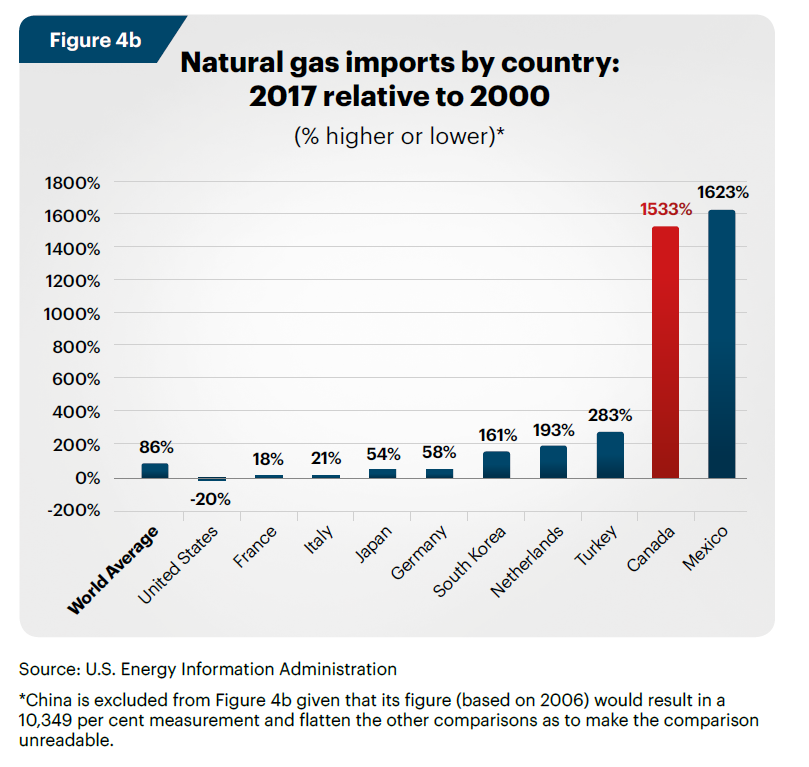 A recent report from the Montreal Economic Institute highlighted this discrepancy in achieving the Canadian government’s goal of reducing greenhouse gas (GHG) emissions. The MEI analysis pointed out that while emissions regulations have reduced the total amount of emissions given off by Canadian industries, other countries have simply offset those GHG emissions. This is called carbon leakage, a phenomenon that is only just being studied in Canada.  Canada has a comparative advantage in emissions intensity from industry. A study by Navius Research showed how by keeping production in Canada instead of displacing it, Canada can reduce overall global emissions.

Despite worldwide exports of natural gas rising 79 percent from 2000 to 2017, Canada’s exports have declined by 17 percent over the same time period.

The Canadian Energy Centre cites that the decline in exports was mainly due to a drop in natural gas shipments to key countries in the region like the United States and a failure to bring in new markets globally. 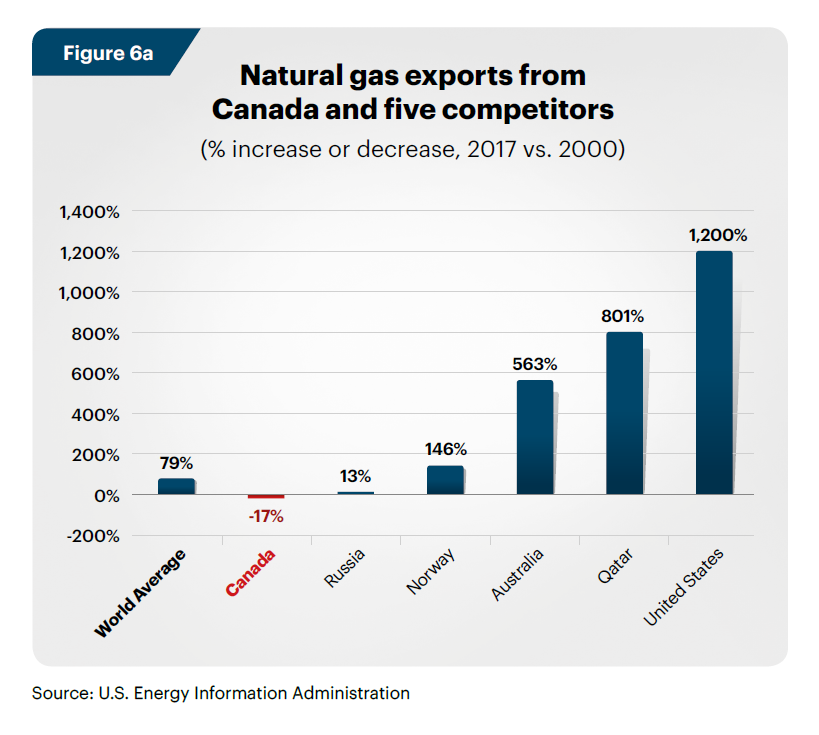 Scandinavia and other developed countries such as Qatar and the United States continue to outpace Canada in natural gas exports.

LNG Canada, a major natural gas export project in Kitimat, B.C., will help grow Canada’s presence in the global natural gas marketplace. The $40 billion project is expected to supply 26 million tons of LNG to be exported each year to emerging Asian markets, where natural gas demand continues to grow. As of June 2019, the project has already made major impacts on the local Canadian economy, the project had already awarded over $1 billion in contracts and procurement opportunities to companies in B.C., including over $558 million to local area and First Nations companies.

As countries seek to reduce emissions, demand for natural gas is growing globally. Likewise, Canadians continue to look to natural gas as a cleaner source of energy to heat their homes and power industry.

However, Canada due to local policy choices, continues to see a downward trend in local production, leading the country to seek out natural gas from neighboring countries, to fulfill its domestic needs. If Canada wants to be independent and a global player in a new energy future, it needs to seriously step up its natural gas production and get projects built.