The winter storm that slammed Texas in February brought with it complex and significant challenges for the state’s energy system as temperatures dropped far below normal winter average spiking electricity demand to historic levels and freezing infrastructure across the state.

As a result, every fuel source faced unprecedented challenges that impacted capacity, but in the aftermath of the storm, it’s become abundantly clear that natural gas carried the state’s energy mix.

In normal times, Texas generates power from a variety of sources – predominantly natural gas followed by wind and coal, according to a 2021 ERCOT report. Depending on the time of day, wind and natural gas capacity tends to interchange as the state’s primary hourly fuel for generation, but during the storm natural gas generation increased substantially far surpassing normally complementary other fuels.

“This was expected, and to some degree was baked into the worst-case scenario analyses. Widespread freezing rain reduced the operability of many wind turbines and overcast conditions obviously limited solar output. Natural gas generation quickly surged to fill the void, then continued increasing to meet the dramatic increase in demand while coal and nuclear held constant.”

An accompanying EIA graphic of hourly generation in the API blog shows how natural gas, wind, and coal complement each other during normal times, but that natural gas carried the burden during the storm: 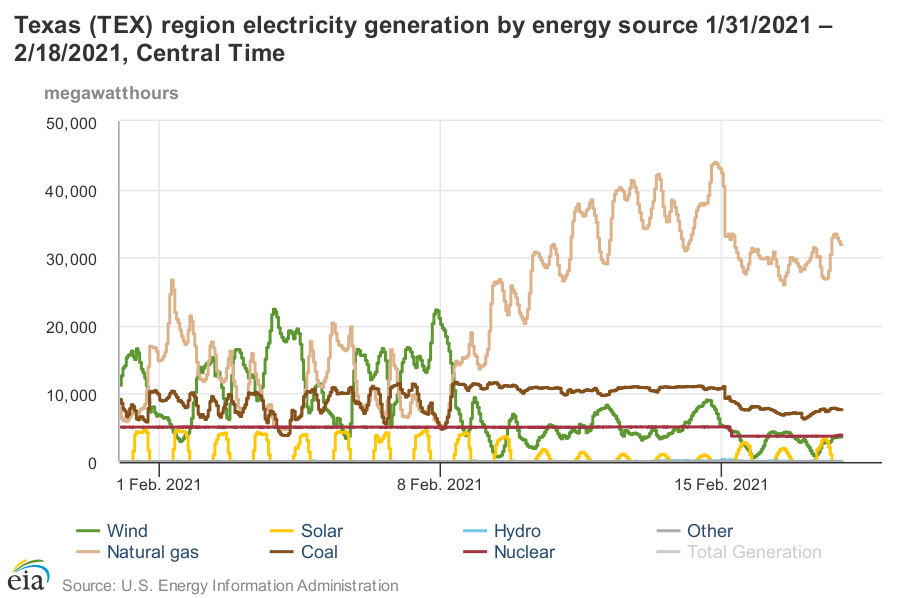 “Despite wind accounting for 25 percent of generation in ERCOT in January, it too dipped as low as 6-7 percent on Feb. 15-16. Natural gas, however, surged to as high as 65 percent on those days to offset losses from coal and wind.”

“despite wind accounting for 25% of generation in ERCOT in January, it too dipped as low as 6-7% on Feb. 15-16. Natural gas, however, surged to as high as 65% on those days to offset losses from coal and wind.” (S&P Global Platts, research note) pic.twitter.com/cvnFcUcJwF

An editorial from the Wall Street Journal also highlighted how natural gas became the go-to fuel:

“Gas-fired plants produced 43,800 MW of power Sunday night and coal plants chipped in 10,800 MW—about two to three times what they usually generate at their peak on any given winter day—after wind power had largely vanished. In other words, gas and coal plants held up in the frosty conditions far better than wind turbines did. … Between 12 a.m. on Feb. 8 and Feb. 16, wind power plunged 93 percent while coal increased 47 percent and gas 450 percent, according to the EIA.”

There will be many lessons learned as investigations continue into the impacts of this extreme weather event on the Texas grid, but one key takeaway already is that having a diverse energy grid is crucial and that includes natural gas.