The U.S. Shale Revolution has transformed the energy landscape domestically and among our trading partners. In the United States, the robust growth of affordable natural gas has translated into energy security, job growth, and environmental benefits. Thanks to abundant natural gas reservoirs, the United States has become a net gas exporter while drastically reducing its CO2 emissions since 2005. However, one key and often overlooked component in achieving this energy odyssey is the importance of natural gas infrastructure. Nowhere is infrastructure more prominent than in Texas.

Unsurprisingly, natural gas-rich Texas has played a leading role in the expansion of modern-day hydraulic fracturing. But despite the Permian Basin’s vast reserves, the region would not have been successful unlocking its full potential without adequate, safe infrastructure.

In fact, the Texas infrastructure model proves that natural gas is not only a source of reliable, affordable energy, it is also a critical player in job creation, regional economic development and geopolitical energy security.

Texas has the largest pipeline system in the country. More than 479,789 miles of pipeline cover the state’s extensive natural gas distribution system, which accounts for one-sixth of all pipeline laid across the United States. In fact, Texas’ total pipeline system distance is equivalent to a trip to the moon and back (the average distance to the moon is 238,855 miles). 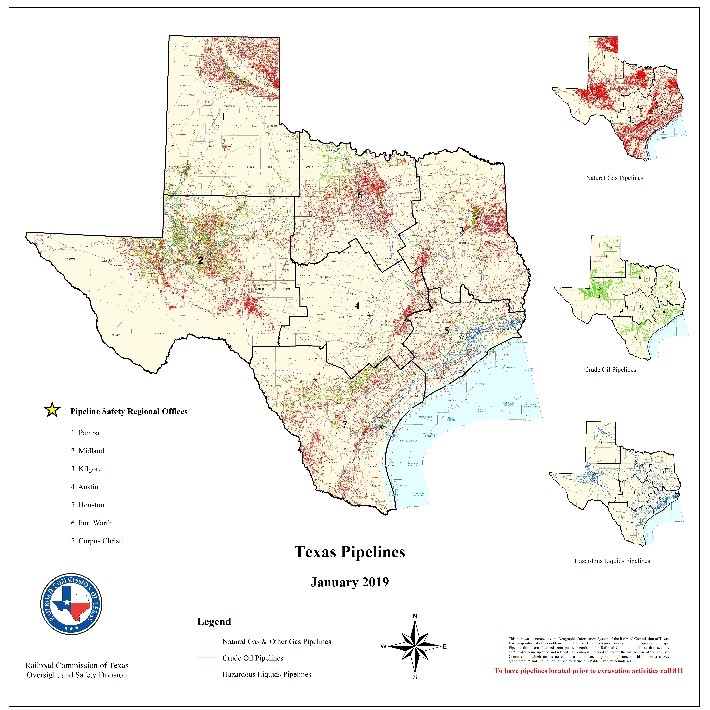 But why is such a large pipeline system necessary? The answer is quite simple. In order to guarantee reliability, a flexible network of pipelines is needed to both move natural gas from where it is produced to where it is used, and to alleviate areas in which storage capacity is limited.

In fact, Texas’ massive and tightly interconnected pipeline system is what ensures affordable natural gas for every consumer. According to Representative Chris Paddie, Chairman of the House Committee on Energy Resources, such connectivity is what also guarantees that natural gas supply reaches all corners of the state, even those far away counties:

“Having sufficient pipeline capacity represents the most effective and efficient way to move oil and gas products around the state. As we have seen recently in the Permian Basin, producers are harmed when they are unable to get produced minerals from the well to production facilities. These inefficiencies are harmful for all aspects of the industry and ultimately the consumer.”

And this is not only limited to Texas. Interstate and regional pipeline connections and storage facilities are vital to transport and expand natural gas benefits to regions, states or counties where there is no natural gas. In short, without an extensive natural gas pipeline and storage system, we wouldn’t be enjoying affordable, reliable and safe energy.

Besides supplying cost-effective, consistent and safe natural gas to all Texans, natural gas-related infrastructure is responsible for the creation of one of the most reliable sources of jobs and economic growth.

According to a report by Texas Tech University and commissioned for the Texas Pipeline Association, in 2019, Texas pipeline operations and construction had a total economic impact of:

In addition, Texas Tech also expects that the Texas pipeline industry will generate more than $1.49 trillion in economic output, $903 billion in additional gross state product and $84 billion in state and local government revenues, over the next 40 years.

Texas’ infrastructure is a key component of the U.S.’ geopolitical energy strategy

But, internationally, natural gas infrastructure has been crucial to expand the United States’ energy diplomacy strategy abroad. The two most evident examples are the cross-border pipeline system with Mexico and the growing LNG facilities on the U.S. coasts.

The U.S. Energy Information Administration expects natural gas exports to Mexico to continue growing as a result of the robust natural gas pipeline system in place, which includes the Wahalajara system connected to the Waha hub in western Texas, the Sur de Texas-Tuxpan pipeline exporting gas from Brownsville, the Comanche Trail pipeline delivering gas from San Elizaro and the Trans-Pecos pipeline, crossing the border at Presidio.

On the LNG side, U.S. natural gas abundance also incentivized the development of liquefaction facilities that would bring shale gas across the sea. In the case of Texas, the state hosts some of the most prominent LNG facilities in the country, including the Freeport LNG, Corpus Christi Liquefaction (CCL) and Texas LNG Brownsville facilities.

These LNG facilities not only provide an economic solution to the question of how to handle abundant natural gas basins, including the Permian and Eagle Ford in Texas. U.S. LNG will also help shape international trade, expanding U.S. natural gas affordability and reliability to both European and Asian markets and rivaling other top LNG producers such as Australia and Qatar.