Natural Gas Opponents Biting the Hand That Feeds Them

Opponents of the development of natural gas in New York have been protesting everything related to the topic, including Inergy, L.P., one of the largest taxpayers in Schuyler and Tioga Counties.  Cherie Messore takes a moment to look at two neighboring New York Counties and two very different reactions to the company and the services it offers.

While a small group of people protested at a proposed natural gas storage facility site in Schuyler County this week, the 20,000 residents of the Town of Owego in nearby Tioga County were celebrating. Why?  Their 2012 school district taxes were reduced by 15%, thanks to the natural gas storage facility there operated by Central New York Oil and Gas.

Central New York Oil and Gas (CNYOG)  is owned by Inergy, the largest independent natural gas storage operator in the northeast.  The company isn’t a natural gas producer: its purpose is to store natural gas until it’s needed during peak periods and then transport  natural gas (through the interstate pipeline system) to market  and meet the needs of utility consumers. In Tioga County, CNYOG is also a welcomed corporate citizen. 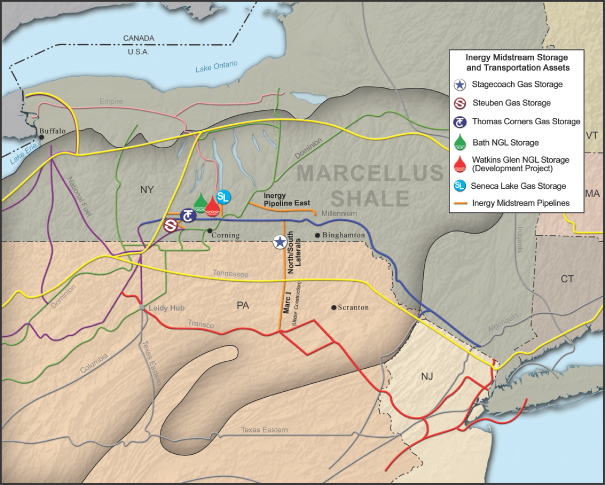 Inergy’s operations in New York, including the Stagecoach storage facility.

More than an efficient and safe delivery system, Stagecoach is the closest storage facility of its kind to the significant energy consumers in New York City, and an economic driver for the Southern Tier.

Revenue of that size creates a significant impact in the county, especially in Owego. With only 20,000 residents, the Town of Owego would be challenged to meet the needs of its residents without CNYOG’s tax levy and its quiet philanthropy. From the beginning, CNYOG distinguished itself, from the unique design of the building to its commitment to community.

That’s enough to heat 400,000 homes for a year. Its working capacity is 26.3 Bcf in six reservoirs. CNYOG drilled horizontal wells to connect a number of vertical wells already existing in Tioga County, efficiently connecting these pockets.

Barton continues, “The storage facility is in the middle of a rural area. Some citizens were concerned about having an industrial site on pastoral property. The company took all of this into account and designed the façade to not intrude on the landscape.”

The result is a handsome stone building, surrounded by  trees, that mitigates the visual impact of the built environment, “The company was able to come to an agreement with the surrounding landowners,” says Barton.

Constructing the facility utilized more than 400 New York contractors, consultants, and vendors over the past 13 years. In 2012 alone, this accounted for more than $20 million in goods and services paid to New York businesses. Additionally, the facility has 25 full-time employees on staff.

Part of the company’s culture is its commitment to giving back. CNYOG contributes to more than 75 local organizations and community groups, “quietly and without lots of fanfare, “says Barton.  The company makes a significant gift to the Owego and Apalachin Fire Departments: this year’s assessment exceeds $169,000.

Given this track record for community investment, employment, and philanthropy, it’s no surprise that the Tioga County Chamber of Commerce named CNYOG its “Business of the Year” for 2012.

“CNYOG is an excellent corporate citizen,” says Martha Sauerbrey, executive director of the Tioga Chamber of Commerce. “The company supports many not-for-profit organizations in the community and also actively participates Chamber activities. After the devastating floods last summer, CNYOG pitched right in to help with recovery efforts. This helps our community and also inspires business growth, too.”

Through it all, the pristine landscape of Tioga County remains elegant, safe, and environmentally welcoming. Through close monitoring and exacting standards for excellence, there have been no industrial accidents or intrusions. Rail lines and pipelines move produced natural gas and other commodities throughout the county without incident.  This pleases county leaders and mollifies residents who may have concerns.

Layer this over the obvious economic impact and CNYOG’s presence in Tioga County is very appreciated. Barton states,”When you have one company picking up 15% of your school district expense, you have to think where you would be without that revenue. Our tax bill would be much higher. It’s a huge impact on the tax base.”

It’s also a solid reminder of how a responsible company and a welcoming government can work together to improve quality of life.