After 59 years in service, one of New York’s largest electricity generators recently stopped supplying the state with power. Despite the state’s mandate that all electricity must be carbon-free by 2040, three new natural gas-fired facilities will make-up the loss in generation that Indian Point’s earlier than expected closure will create.

Indian Point has supplied nuclear power to New York City and parts of Westchester County since the 1970s, and its early retirement leaves a 1,040 megawatt generation gap – about one-quarter of the state’s nuclear capacity – that will now be filled by natural gas. Most, if not all, of that gas will come from Pennsylvania’s Marcellus Shale.

As Robert Bryce explained in 2017, a Manhattan Institute report found “that if Indian Point is shuttered before new power plants are built near the five-borough area, the probability of blackouts in New York City will double.”

Notably, and in what has become a common theme of New York’s energy policies, while the three new facilities – Bayonne Energy Center II (120 MW), CPV Valley Energy Center (678 MW), and Cricket Valley Energy Center (1,020 MW) – were necessary to ensure reliable electricity supply, the Cuomo administration tried to prevent at least one of the facilities (CPV) from obtaining the permits needed to build a pipeline to fuel it. Had the Millennium Pipeline decision not been overruled by the Federal Energy Regulatory Commission, the plant still would have supplied electricity: It just would have used higher-emitting fuel oil, according to statements from a CPV spokesperson in 2017.

Conundrum is a word EID has used often to describe New York’s energy policies, and for good reason. The state where the first commercially viable natural gas well was drilled banned high-volume hydraulic fracturing – bringing more than a century of energy production to nearly a standstill – in the same week that it released its 2015 Energy Plan that gave natural gas a starring role in its energy profile:

New York releases its energy plans every six years and the next edition should be available next month. Given the state’s aggressive push for zero-carbon electricity while still relying on natural gas for the bulk of its power generation, the new plan will provide a major glimpse at how it intends to quickly replace that fuel source – or if it is even a realistic possibility. 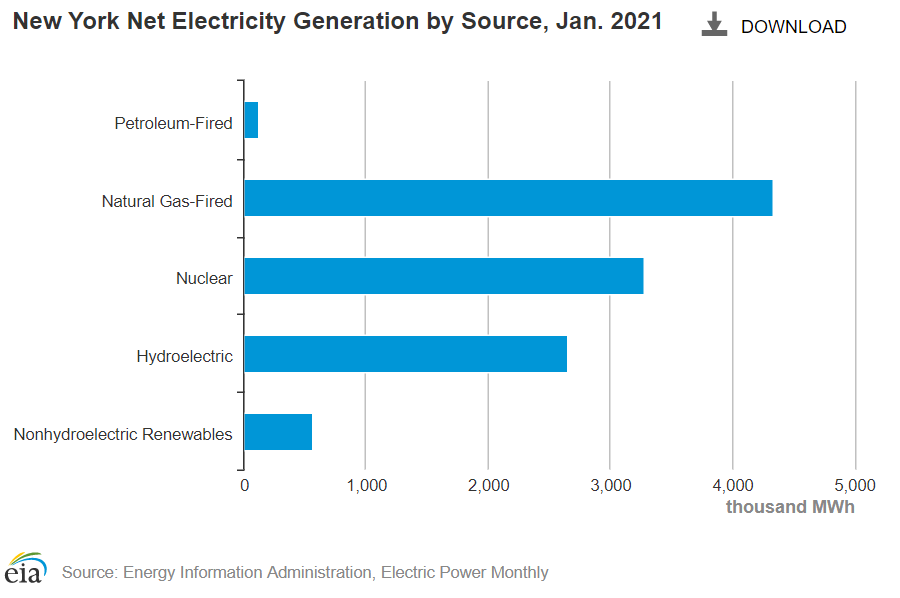 After all, as Indian Point’s closure demonstrates, when it comes to ensuring reliable, affordable energy, natural gas is still New York’s fuel of choice.