Don Roessler discusses the impacts natural gas is having on the trucking and railroad industries, specifically the decision to convert many of these vehicles to compressed natural gas (CNG).

Since this is my first time writing for this website, I’d like to give you a little background before I begin so you can have a better understanding of my interest in natural gas and it’s use as a fuel source for the trucking and railroad industries. My roots are in Washington County, Pa. where the natural gas industry has been around about as long as my family.

I am a descendant of Rev. Dr. John McMillan, one of the early pioneers of Canonsburg, Pa., who started Jefferson College in Canonsburg, which later merged with the Washington College in Washington Pa. to become what we know now as W.& J. College. My occupation of choice was as a mechanic who worked on everything from weed-eaters to the biggest bulldozer made by Caterpillar. I have also worked at several other occupations through the years. I now focus all my time on taking care of my farm and selling home grown produce when possible. The natural gas industry has helped me to pay the bills when the produce doesn’t.

I am also a member of both The American Truck Historical Society and The Antique Truck Club of America, which is why the decision by this industry to convert from diesel to natural gas or CNG is such an interesting occurrence to me. Waste Management, a company of which we are all aware, has been leading the way for the trucking industry to switch from diesel to cleaner burning natural gas.

Here is a quote from  The Wall Street Journal: 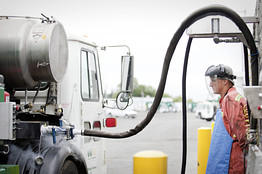 Photo by Alison Yin for The Wall Street Journal

In fact, the company says 80% of the trucks it purchases during the next five years will be fueled by natural gas. Though the vehicles cost about $30,000 more than conventional diesel models, each will save $27,000-a-year or more in fuel, says Eric Woods, head of fleet logistics for Waste Management. By 2017, the company expects to burn more natural gas than diesel.

The video featured in the beginning of the article, and found below, is very interesting so make sure you watch it too.

And, it’s not just the trucking industry looking for ways to reduce costs and emissions, and considering natural gas as a viable solution. Railroad companies are now looking at using CNG as a fuel to power their locomotives. According to this article from The San Francisco Chronicle, the Canadian National Railroad has built an experimental locomotive that will run on a combination of CNG and Diesel to test to see if it will be feasable. This technology has been around for years as the Napa Valley Railroad, a scenic railroad in California, has two locomotives that run on CNG. One runs on a combination of CNG and the other runs on straight CNG. This is another step forward in reducing emissions being pumped into the atmosphere. I pulled a couple of quotes from the article that add an interesting twist in the story:

“On a 300-mile stretch of railroad in the plains of eastern Alberta, a test train  chugs across the landscape burning a fuel that once made sense only  to environmentalists.”

“Although natural gas is a fossil fuel that contributes to emissions, many environmentalists have long supported it as a cleaner-burning bridge fuel toward  renewable energy sources. “

Seems that some of the environmentalists are for using natural gas as an alternative fuel. Imagine that!!

As some of these major users of fuel convert to products like natural gas, it is going to help both the American economy and our environment, and that’s something we should all stand behind.