For decades, the natural gas industry has addressed customer demand for increased energy efficiency by incorporating incentives and partnering with the federal government. The resulting improvements have been a benefit to consumers, who want to save on their energy bills, and for businesses worried about their carbon emissions. The Department of Energy (DOE) should review market forces and efficiency goals when designing new energy standards.

In January 2016, the DOE amended its standards for consumer boilers because the proposed standards were not economically justified. It was not just that the analysis had a flawed projection of future natural gas prices, but that the DOE failed to collect actual residential marginal prices that would determine the utility bill savings of the efficiency improvements for consumers.

According to the comments:

And when Spire Inc. – a natural gas utility – collected residential marginal price data for the state of Missouri, it found that the DOE estimate overstated consumer utility bill savings by roughly 40 percent.

The overestimation is even worse when considering that the proposed change in standards would effectively force noncondensing boilers out of the marketplace, starving consumers for parts and forcing a new technology on those who may not be prepared, as not all buildings are designed for condensing furnaces or have the capability to support the technology.

The DOE is now reviewing this rule and considering placing both boilers into the same category. This is a case where bad analyses can lead to detrimental standards. Forcing businesses to change is actually considered unlawful according to the prior administration’s interpretation, which concluded that a regulation that imposes drastic change in the marketplace would violate the Energy and Conservation Act of 1975 because of its limiting effect of natural gas technologies in the market.

As the DOE considers the future standard, it should look at keeping the two technologies separate so that businesses can seek energy efficiency without redesigning their HVAC systems.

Energy efficiency is an issue that the natural gas industry has championed over decades, and is a core component of most utilities’ offerings. In fact, hundreds of utilities across the country partner with the EPA’s ENERGY STAR program.

Utilities’ participation in the ENERGY STAR merits full consideration of industry perspectives. As the American Public Gas Association clarifies in a 2017 comment to the House Subcommittee on Energy and Power, it advocated for requiring the establishment of the ENERGY STAR standard for all equipment:

“Because the Energy Star Program is based on partnerships between the federal government, manufacturers and utilities, it is imperative that the program’s standards be developed through an open and transparent process.”

Efficiency improvements are happening in each sector of the energy industry and in parallel with each other. As LED lights are installed in one home and high-efficiency heaters go into another, there is no reason that the two categories of natural gas boilers cannot coexist and contribute to reduced greenhouse gas emissions to owners. The idea of banning one appliance type through new standards threatens to slow the consistent improvement of appliances by forcing individuals to use outdated equipment for longer.

Economics, Efficiency and Natural Gas Use

Although natural gas is used for electricity generation, for appliances that don’t need to be electrified, it is economically beneficial for consumers to directly use natural gas. According to the Office of the Federal Registry, electricity is three times more expensive per million British thermal unit (MMBtu) than natural gas, on an average unit cost of energy basis. Moving all natural gas use upstream would limit the energy per MMBtu that homes receive and instead, sell it to residential users for triple the price. 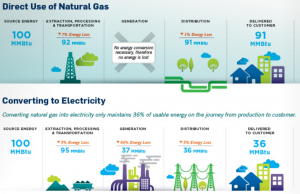 And the efficiency of natural gas appliances will only continue to improve. DOE’s office of Energy Efficiency & Renewable Energy is investing millions in their comprehensive strategy to improve the efficiency of thermally driven appliances, including funding multiple R&D efforts towards the next generation of natural gas appliances. And in the the private sector, GTI, a technology nonprofit is developing and deploying high-efficiency natural gas technologies to meet growing energy demand with clean, lower-cost fuels.

Energy efficiency is happening everyday across multiple sectors and for all consumers and businesses. The natural gas industry is striving to make continual improvements to meet this customer demand. To support these efforts, the DOE should address industry comments and work with suppliers to ensure that standards are designed to achieve these efficiency goals.