This morning, a number of researchers released a report spearheaded by Global Community Monitor (GCM), a well-known anti-fracking organization, which uses ‘bucket’ samples in summa canisters lined with Tedlar bags, to claim that hydraulic fracturing causes high concentrations of volatile compounds to go into the air.

Before we get into the problems with the report (and there are many) it’s important to understand the extent of GCM’s ban fracking activism. For instance, the group has made the following statements: 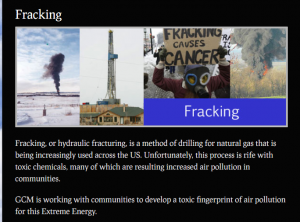 Perhaps GCM executive director and founder Denny Larson put it best when he described the mission of the so-called “Bucket Brigade,” the most prominent activist vehicle that GCM uses. In a 2006 handbook for environmental activists, Larson wrote:

“The Bucket Brigade is not a scientific experiment.  Our focus is on organizing. We use science, but only in the service of organizing.”

In other words, GCM could not be clearer that its focus is activism, not science, and that activism is fully committed to shutting down oil and gas activity.

GCM isn’t the only anti-fracking group that contributed to this report, either.  In the acknowledgements section, the researchers explain they would like to thank

Against that backdrop, here are the most important things to know about GCM’s latest report.

GCM has local affiliates all over the country, often known as “Bucket Brigades,” which train activists to gather air samples in buckets.  However, whenever GCM has released results of its bucket tests, environmental and health regulators often find them to be scientifically unsound.

For instance, a local GCM affiliate in Durango, Colo., released a report claiming that students at Sunnyside Elementary School were being exposed to unsafe levels of cancer-causing chemicals, based on a single bucket sample that lasted less than three minutes.  However, just a few months before CGM released its findings, the Environmental Protection Agency (EPA) completed months of testing at 63 schools in 22 states and came to the opposite conclusion – that Sunnyside’s students were safe.

To confirm EPA’s results, the Durango School District 9-R commissioned another study, which concluded that the volatile organic compounds in the air around the school were well below thresholds that would indicate a public health threat.  As the district’s chief financial officer explained about the results of that study, “What I’m hearing from the people that did the test is there is no cause for concern at this point in time.”

If that isn’t enough, the Colorado Department of Public Health and the Environment (CDPHE) also looked into GCM’s report and concluded: “There are some serious technical deficiencies in the study.”

A separate Bucket Brigade also released a number of dubious studies in Louisiana, which environmental regulators have called into question.  For instance, in a letter to EPA, Louisiana Department of Environmental Quality identified several discrepancies in a 2009 report released by the Louisiana Bucket Brigade.  As New Orleans Time-Picayune columnist James Varney put it,

“The Bucket Brigade maintains – and widely circulates in fliers and promotional tools – its own numbers for the number of violations or accidents that occur at Louisiana’s chemical plants and refineries. The problem is they do not match up with the DEQ, which the Bucket Brigade claims is its source. ‘In their “Common Ground” reports we can’t figure out how they get their numbers,’ DEQ spokesman Rodney Mallett said. ‘They are stretching the truth from time to time.’ For example, a Bucket Brigade flyer on the ExxonMobil Baton Rouge report claims 778 accidents were reported there between 2005 and June 1, 2012. But the DEQ has only 202 such incidents reported. The inflated numbers provide a misleadingly alarming picture, according to regulators.” (emphasis added)

“Rather than collect a sample in a stainless steel can, the bucket contains a special bag made of Tedlar to hold the sample. Bags are obtained from the laboratory that processes the sample and purged three times with pure nitrogen by the laboratory prior to use.”

In the wake of GCM’s report on air quality in Durango, the CDPHE found that the use of Tedlar bags was not scientifically sound.  As the agency explained,

Concerns about the use of Tedlar bags were also raised by the EPA.  In a 2011 memo, EPA explained, “The following areas of concern and how they are addressed by the Bucket Brigade QAPP should be noted when considering additional uses for Bucket Brigade data (these areas are given as examples and not intended to be comprehensive).” Here are some of the areas of concern according to EPA:

So, in addition to GCM’s clear bias against oil and gas development, the methods that it has employed for this latest study suggest its results should be approached with extreme caution, especially since environmental officials have identified that the bags themselves could contain high levels of the very compounds that the report claims to have discovered.

Fact #3: “Grab samples” are not appropriate for determining short or long term exposures

The GCM report explains its use of grab samples this way,

“Grab and passive air samples were collected by trained volunteers at locations identified through systematic observation of industrial operations and air impacts over the course of resident daily routines.”

GCM goes on to say:

“Although our samples represent a single point in time, we compared concentrations to acute as well as chronic risk levels as many of the activities that generate volatile compounds near UOG operations are long-duration (the life cycle of an unconventional natural gas well can span several decades).”

But as the CDPHE said of GCM’s findings in Durango, “grab samples” are not appropriate for determining cancer risks – which is exactly what today’s report tries to do anyway:

In its previous study on Durango, GCM did not consider acute risk – in its latest report it did.  However, according to CDPHE, studies to determine acute risk are “generally based on 1-hour exposure and not grab samples.”

Fact #4: GCM does not account for large discrepancies in data

Aside from the fact that grab samples are not a scientifically appropriate way of determining short or long term exposures, GCM makes a lot of the high readings it found in Wyoming, Pennsylvania, and Arkansas – but it downplays the fact that it found no elevated levels of VOCs in Ohio and only one elevated sample in Colorado.  Here’s what the report says on those states:

One of the five grab samples contained 41 micrograms per cubic meter of hydrogen sulfide and exceeded the ATSDR intermediate MRL. None of the passive samples had volatiles exceeding the ATSDR MRLs or EPA IRIS risk levels.

None of the four grab samples or five passive samples contained volatiles at concentrations that exceeded the ATSDR MRLs or EPA IRIS risk levels.”

This brings us to the obvious point: GCM makes no effort whatsoever to determine where the chemicals were actually coming from.  That’s a not insignificant omission, because the report was clearly intended to malign oil and gas development.

State regulators have also pointed out GCM’s failing on this specific point, in reference to one of their earlier reports:

It’s easy to get suckered into the findings in a GCM report, since – by the group’s own admission – the team is effective at community organizing and using the appearance of science to advance an agenda. But the questionable methods that GCM employs should be a huge red flag, not to mention the who’s-who list of anti-fracking groups who contributed to this report. The fact that GCM has flatly stated that shale development is inherently unsafe and that no regulation will ever suffice should be an indication of what the motivations were for this report.

“I’m not religiously opposed to fracking. While I prefer renewable fuels, we’re a long way from that. I just want it done safely.”

That puts Carpenter directly at odds with Global Community Monitor, which was responsible for “training” the teams that gathered the samples for this report. Something, as they say, doesn’t add up – and we’re not just referring to GCM’s scientifically questionable tactics.