We all know oil and gas provide jobs for Americans, but a recently released study conducted by PricewaterhouseCoopers (PwC) for the American Petroleum Institute (API) shows just how many jobs: 10.3 million.

That’s the number of U.S. jobs supported by oil and gas across all 50 states in 2015. That doesn’t even count the impact of capital investment by the energy industry, which supports an additional 2.3 million jobs and $134 billion of labor income.

The benefits are widely distributed from coast to coast, with states as diverse as California, Colorado, Illinois and Louisiana having at least 200,000 jobs each supported by the oil and gas industry.

The report sheds light on an often unnoticed feature of the industry: its nationwide footprint. That explains why dozens of states with little or no production still had tens or hundreds of thousands of jobs supported by oil and gas.

Nearly three million of those jobs are in Texas and California, no surprise for an industry that accounts for nearly eight percent of US gross domestic product. 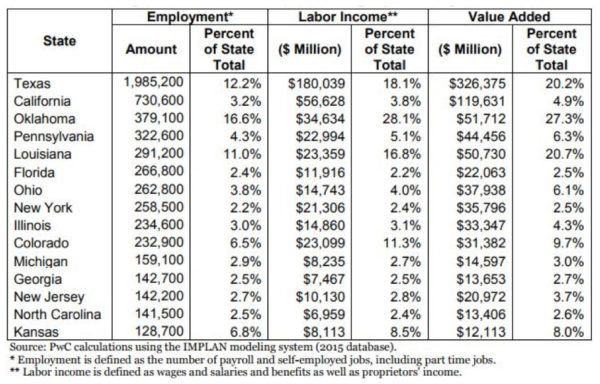 Studies have already highlighted the huge growth in capital investment and industrial production along the Gulf Coast, the revitalization of Appalachian towns, and the reduction in U.S. greenhouse gas emissions over the last 10 years as bright spots in America’s energy renaissance.

The API study confirms this growth, finding that half a million jobs have been added in the oil and gas industry since 2011. And with ever-more efficient production and new studies revealing just how extensive American natural gas reserves are, that growth shows little sign of slowing down.

New pushes to reduce regulation, particularly on liquefied natural gas (LNG) terminals, and massive capital investment in production, transportation and processing infrastructure to the tune of hundreds of billions add to that growing optimism about the future of American energy dominance.

On top of that, PwC found that oil and gas industry workers, excluding retail gas station employees, made 90 percent more than the median US wage.

Oil and gas industry workers took home an average wage of $101,181 in 2015, the same year that the industry contributed $1.3 trillion to the nation’s economy.

That growing footprint means more good paying jobs for highly skilled engineers, technicians, and specialists – many of whom are union members.

That amount takes into account the staggering variety of industries and companies involved in the production, refinement, transportation, processing, and use of oil and gas.

These companies and industries run the gauntlet from shale well drillers and pipeline maintenance to less obvious players like asphalt layers, roofers, and grease manufacturers that depend on crude oil to produce their products. 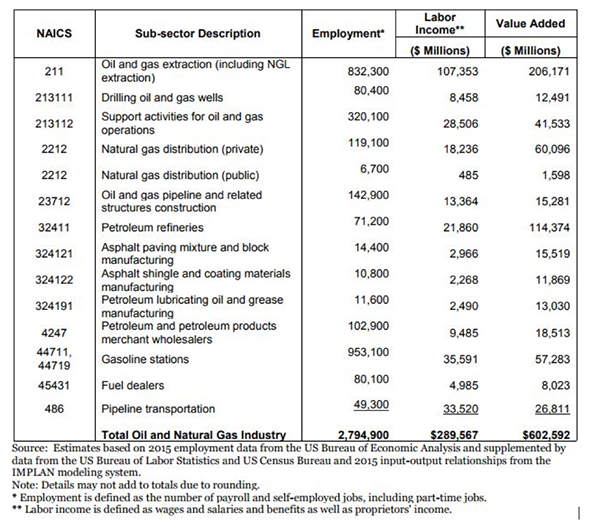 It’s also important to note that this study barely scratches the surface of the true impact of cheap, reliable fuels on U.S. economic growth.

Though this study did an excellent job of quantifying the huge direct impacts of oil and gas in the U.S., the indirect economic impacts – from factories manufacturing high tech plastics out of hydrocarbons all the way down to consumers filling up their gas tanks for less – cannot be understated.