Political specialist Shaun Boyd with CBS 4 in Denver is out with a new report this evening predicting that activists have fallen short in collecting the necessary number of signatures to place a pair of anti-fracking ballot initiatives before Colorado voters this fall. As Shaun Boyd reports for CBS 4:

“This story gets more bizarre by the day. The measures have been getting national attention as though they’ve already made the ballot, the New York Times calling them the most serious effort yet to stop fracking. But we have obtained reports filed by the circulators for these measures and based on the number of signatures that they say they have, the chance of these measures making the ballot, is remote.” (Emphasis added) 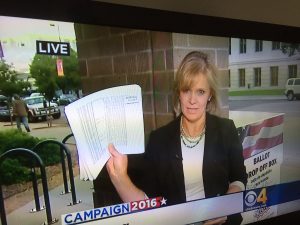 Boyd says that documents obtained by CBS 4 show that chances of the measures making the ballot are “unlikely.” And when asked about the initiatives chances, former Colorado Secretary of State Scott Gessler said, “I think they are doomed.”

Initiative backers claim they have submitted more than 100,000 signatures for each measure. And while that may appear sufficient for them to meet the 98,492 signatures necessary to make the ballot at face value, in Colorado, ballot initiative campaigns typically collect far more than the requisite number of signatures. As the Denver Business Journal reports:

“A general rule of thumb among people who have worked on ballot campaigns over the years is that supporters should gather and turn in at least 140,000 signatures in order to comfortably clear the signature validation requirements.”

Questions were first raised about the number of signatures the groups collected after after Colorado Secretary of State Spokeswoman Lynn Bartels tweeted a photo of a stack of empty boxes, observing that backers of Initiatives 75 and 78 “turned in lots of boxes with very few petitions in them.” When asked by the media about the photo that the Greeley Tribune  described as “about 50 boxes,” Bartels called it “unusual.” As CBS 4 previously reported:

“It is unusual because other measures that were turned in, the petitions were scanned in by our staff and put back in their original boxes to be sent down to Pueblo to the state agency to be checked and they maybe had five boxes left over. This was boxes and boxes and boxes. That may not mean anything but it may mean something,” Bartels said.

It should come as no surprise that political analysts are predicting the groups will fall short. The initiatives have faced fierce bipartisan opposition from prominent Democrats like former Denver Mayor Wellington Webb and former United States Senator and Secretary of the Interior Ken Salazar who have been speaking out against the initiatives. Joining them are Colorado’s Democratic Governor John Hickenlooper has opposes the initiatives along with Colorado’s business community who are saying they will be economically devastating for the state.

And CBS 4’s report comes after sources speaking with Politico earlier in the day exposed a rift within the state’s environmental community over the initiatives. As Politico reports quoting an anonymous activist,

“If I were a betting person, I would not bet they would get on the ballot,” one Colorado environmentalist said of the anti-fracking initiatives, insisting on anonymity to speak candidly. (emphasis added)

Another activist put it more bluntly. As Politico also reports,

“Another environmental advocate in the state agreed that the initiatives have “a pretty tough path to victory” if they do make it on the ballot, adding: “I’d rather not see the measures crushed at the ballot box.””

Only time and signature verification will tell if activists were able to gather the requisite number of valid signatures to place their measures on the ballot. But as more and more information about their signature gathering efforts trickles out, it is looking as though this might just be another failed media stunt to add to an already long list.

Colorado, Economy, Energy In Depth, Keep It In The Ground