Based on emission estimates collected by advanced satellite sensors, the data echoes the most recent U.S. Environmental Protection Agency (EPA) Greenhouse Gas Inventory, which show methane emissions from venting and flaring decreased 17 percent from 2013 to 2016 even as even as U.S. oil production increased 19 percent.

Collectively, this recent data illustrate the United States is far outpacing other major global oil producers in flaring reductions even as it emerges as a potential world leader in crude oil production, as the following graphic from the World Bank report shows.

For some perspective, the GGFR data show that although Russia reduced flaring more than any other country in 2017, it still flared 52 percent more gas than the United States in 2017 — even as the U.S. out-produced Russia in terms of crude oil and petroleum liquids in 2017, according to the latest BP Statistical Review of World Energy.

But not only does the latest GGFR and EPA GHGI show that the use of flaring in the United States is declining, it’s perhaps even more notable that the latest GHGI shows U.S. venting and flaring emissions from the past several years are likely far lower than previously believed.

Based on improved methodology, EPA downwardly revised emissions estimates from venting and flaring between 54 and 93 percent from 2012 and 2015, and even more dramatically in previous years, as the following chart from the most recent GHGI shows. 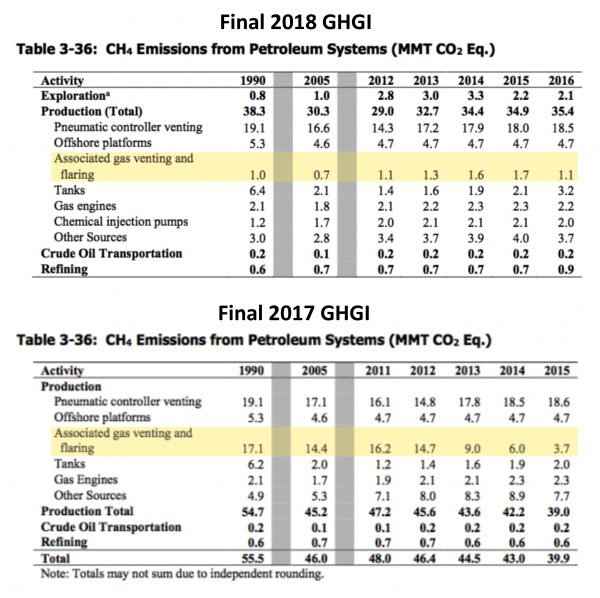 In other words, U.S. venting and flaring emissions are not only declining — they are declining from levels that were lower than previously believed. This raises several questions regarding the justification for the Obama-era methane rule targeting venting and flaring on public lands, considering it was predicated on the notion that operators were not only wasting large amounts of potentially marketable natural gas, but at ever-increasing levels as well.

That has proven to simply not be the case, and with the Obama administration version of the rule currently in limbo, it is clear that progress on the infrastructure build-out front —rather than costly regulation — not only deserves credit for the reduction in flaring, but will be the key to continuing these trends moving forward.

To fully understand this issue, it is important to know that flaring is an important and oftentimes necessary safety measure that follows a highly regulated, closely managed process used as a means of converting methane into CO2 and water, in turn producing far less emissions than venting the methane into the air. However, even though flaring is an essential component of oil development, industry — contrary to activist claims — has no interest in utilizing the process any more than is absolutely necessary. But increased use of flaring becomes necessary when the needed infrastructure to deliver associated natural gas to market is delayed either directly or indirectly by “Keep It In the Ground” tactics.

As Bloomberg Government reported this week,

“Flaring occurs when gas that’s produced alongside crude is burned off instead of being sold, often because there aren’t enough pipelines connecting the field to major markets.”

And considering the Obama-era rule would effectively ban flaring on public lands altogether, it is clear that anti-fracking activists’ continued support of the rule has far more to do with their goal to stop oil and gas development than reducing emissions. Put another way, KIITG activists know that fewer pipelines and gathering lines equates to more emissions and less production – the exact opposite of what the movement claims to support.

Fortunately, with the costly Obama-era rule in limbo, the latest data clearly show that infrastructure build-out is the key to limiting flaring while allowing domestic oil production to continue to surge to record levels. However, it will be essential for infrastructure permitting and build-out to be expedited moving forward for this trend to continue.