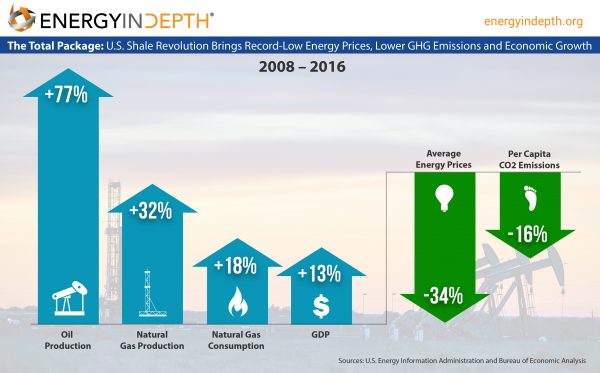 The U.S. Energy Information Administration (EIA) recently released a report that finds average U.S. energy costs fell 34 percent from 2008 to 2016, dropping from record-high levels to a “record-low energy expenditure share” in less than a decade. From the report:

In terms of percentage of real gross domestic product (GDP), the report explains that in 2016 U.S. energy prices were at their lowest levels since the EIA began tracking such data in 1970.

It isn’t difficult to surmise what led to the dramatic decline in energy costs over that eight-year span. As EID recently highlighted, 2008 happens to be the year the shale revolution took hold across the United States. So it is no coincidence that energy prices reached record lows at the same time U.S. oil and natural gas production increased 77 and 32 percent, respectively, from 2008 to 2016.

Advances in horizontal drilling and hydraulic fracturing have driven U.S. energy costs to record lows and facilitated greater energy efficiency by opening vast reserves of previously unreachable oil and natural gas at a time in which many believed domestic production was in an irreversible decline. As a result, the United States has managed to reduce emissions and spend less on energy despite maintaining similar levels of consumption as recent years. As the EIA notes:

“The decrease in total U.S. energy expenditures in 2016 was entirely attributable to lower energy prices, as total energy consumption has remained virtually unchanged since 2013.”

“As we now know, 2008 was at the start of a massive transformation caused by the drop in natural gas prices and increased generation from renewables…”

In addition to being abundant and affordable (thanks to fracking), natural gas is also far more efficient than other traditional fuels, as EIA noted in an earlier report released this summer:

The collective data really couldn’t be much clearer: Increased natural gas use has proven to be a win-win for the economy and environment. U.S. GDP has increased 13 percent from 2008 to 2016 at the same time that overall CO2 emissions decreased eight percent and natural gas consumption increased 18 percent.

And though shale development’s most obvious contributions to America’s status as a world leader in economic growth and carbon reductions has been helping reduce power sector carbon emissions and driving electricity costs to record lows, shale oil development has also helped keep gasoline prices lower than they otherwise would have been, explaining why transportation costs have declined significantly as well.

Though gasoline prices are influenced by a number of factors that are entirely out of the United States’ control — including global market prices and geopolitical events that have led to an uptick in prices this summer— the U.S. shale revolution has helped keep domestic gasoline prices far lower than many other regions of the world, and far lower than what they would be had the shale revolution never happened.

These achievements can all be traced to the shale revolution, which continues to be a win-win for the U.S. economy and environment.