As the #ExxonKnew campaign continues to unravel (with the latest blow being the Virgin Islands AG office retracting its subpoena), newly released emails confirm that the attorneys general launching climate investigations have been doing everything they can to keep their efforts – and their collaboration with environmental activists – hidden from the public. That includes signing on to a Common Interest Agreement (CIA), which would allow them to keep the emails relating to their investigations under wraps.

The new emails, obtained through Freedom of Information Act (FOIA) requests by Energy & Environment Legal Institute (E&E Legal) and the Free Market Environmental Law Clinic (FME Law), confirm that Gregory Schultz of the Rhode Island Attorney General’s office signed on a Common Interest Agreement that was distributed to all the AGs’ offices involved by the New York Attorney General’s office.  Here’s the full exchange of how that went down: 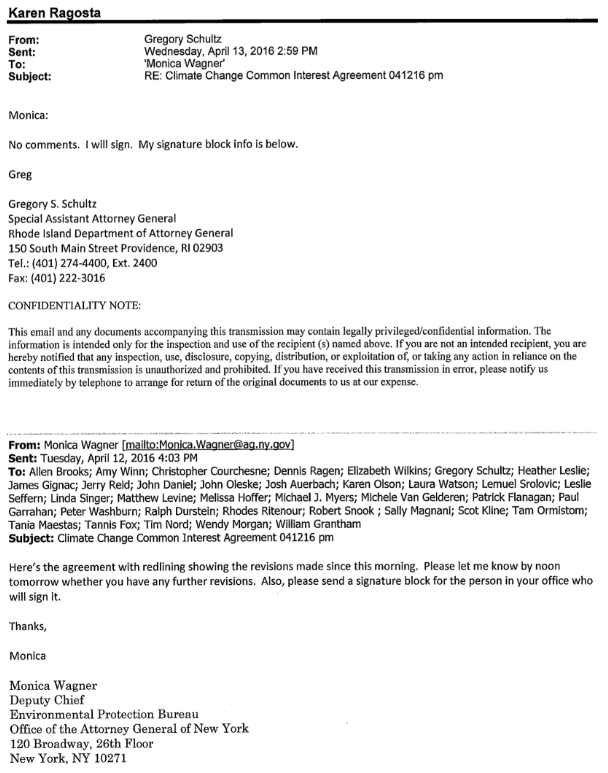 Interestingly, the actual Common Interest Agreement was not disclosed even though it was originally attached to the email above.  As Chris Horner of the Energy & Environment Legal Institute explained in a recent op-ed, the emails obtained from the Rhode Island Attorney General’s office only

“revealed the existence of other ‘responsive’ records not produced. For example, these show Rhode Island’s AG agreed to a second CIA to exempt the AGs’ ongoing campaign from FOIA laws; they withheld it, without admitting they did so, even though it was plainly an attachment to one of the produced emails.”

That’s not all. The Illinois Attorney General actually cited a Common Interest Agreement associated with the Clean Power Plan as the reason it would not provide the emails related to the #ExxonKnew effort that were requested. As the office put it,

“I would note that a common interest agreement (Agreement) was entered into by the Office of the Illinois Attorney General and the other affected stakeholders related to a number of the withheld records.  Under the terms of that Agreement, particular categories of documents are to remain confidential.”

Of course, these revelations are in no way surprising considering that, as Energy In Depth reported in April, previous FIOA’d emails revealed that Lem Srolovic of the New York AG’s office had been sending around a draft of a Common Interest Agreement for input from the other offices ahead of the AGs’ March 29 press conference with Al Gore.  In one particular exchange, Vermont Assistant Attorney General Scott Kline expressed concerns that their state laws wouldn’t allow them to sign on to the Agreement but noted “our office is okay with refusing to disclose covered documents,” as long as it complies with their state laws. 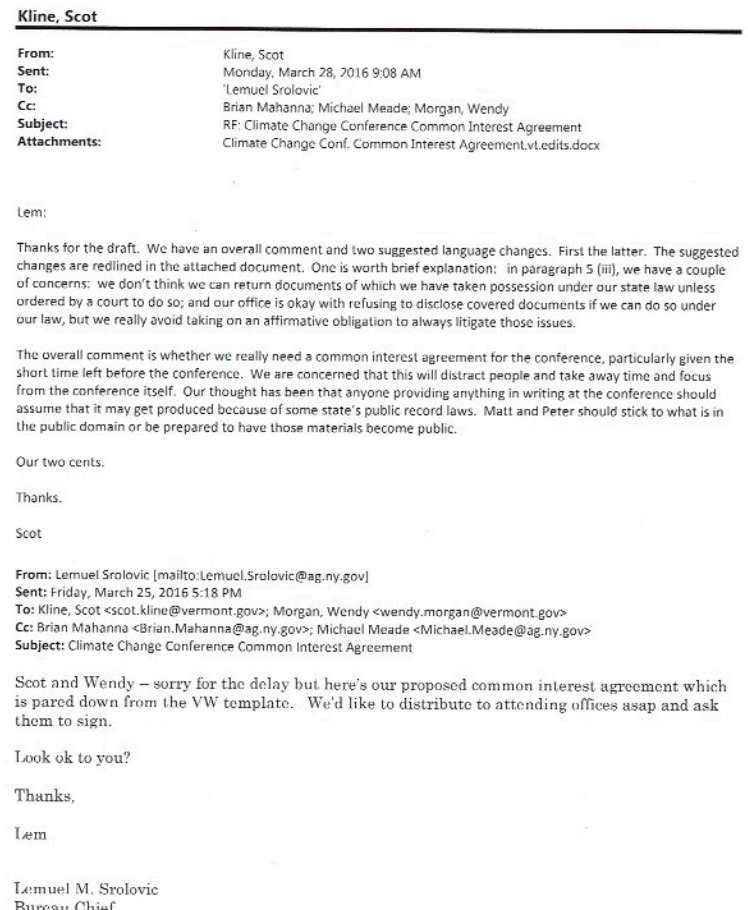 When Kline specifically mentions “Matt and Peter should stick to what is in public domain,” he is referring to Matt Pawa, an environmental lawyer who has long advocated for government investigations of fossil fuel companies, and Peter Frumhoff from the Union of Concerned Scientists, the Rockefeller-funded organization that held a conference in 2012 in La Jolla, California for activists to brainstorm ways they could use racketeering laws against ExxonMobil.

Previous emails revealed that both Pawa and Frumhoff had briefed the AGs ahead of their March 29th press conference – and it was their presence behind the scenes that the AGs specifically didn’t want anyone to know about. In fact, when the Wall Street Journal reached out to Pawa about his role with the attorneys general, Pawa sent an email to Srolovic with the New York Attorney General’s office, as well as Kline in the Vermont Attorney General’s office, asking what he should do. Srolovic responded, “My ask is if you speak to the reporter to not confirm that you attended or otherwise discuss the event.”

As their coordination and collusion with the AGs launching investigations became public, the activists behind the #ExxonKnew campaign went into full damage-control mode, trying to push the claim that their secret campaign was never really secret at all. After being caught working closely with the AGs, Frumhoff even told the New York Times, “There’s nothing hidden here.”

But with each batch of emails, there is only more evidence that the AGs have been working pretty hard to keep their business hidden.  All of this leads to the obvious question: if everything they are doing is above board as they have claimed, what exactly are they trying to hide?