“[By] strengthening these rules, Colorado will have the most stringent flowline safety regulations in the country, while at the same time promoting the importance of following a safe digging process to homeowners and professional excavators.”

Dan Haley, president and CEO of the Colorado Oil and Gas Association (COGA) emphasized the importance of a robust, collaborative process, stating in a release:

“These new oversight requirements keep Colorado at the front of the pack nationally, with challenging, first-of-their-kind regulations that push the envelope for our oil and gas industry. It’s important that Coloradans know our industry is regulated and that our members work every day to produce the energy we all need each day in safe and environmentally responsible ways. It’s also important that Coloradans not only feel safe, but that they can see the proactive steps being taken to ensure that safety.”

The process began back in September 2017 at the request of Gov. John Hickenlooper (D-CO), in accordance with the governor’s August 2017 announcement of a seven-pronged approach following review of oil and gas operations that directed the state’s regulatory authority, the COGCC, to review and strengthen existing flowline rules.

The months-long process featured diverse stakeholders, including local governments, the business community, the agricultural community, mineral right owners, and the oil and gas industry. During closing statements, there was common consensus that the process was a successful collaboration even with the broad range of varying backgrounds and viewpoints of the stakeholders involved.

COGCC Director Matt Lepore acknowledged the good work of the collaborative process in his opening statement of the hearing:

“I do again want to take the opportunity to thank my staff who have worked tirelessly on this, just a tremendous amount of commitment to really getting this right, as best as it can be done. I want to acknowledge the stakeholders too. I think that this has been rigorous and the stakeholders have engaged, in really good faith, and brought forward proposals that where they felt that what we’ve asked for doesn’t make sense for one reason or another, they have come forward with thoughtful and intelligent alternatives.”

Director Lepore went on to acknowledge that though the efforts have been collaborative, “The nature of this beast is that not everybody will be happy. We often joke that if everybody is a little bit unhappy, we’ve hit it just right.”

One of the key discussions during the process regarded a closer look at the 811 “Call Before You Dig” program versus mapping of flowlines. After hours of thoughtful, deliberative discussion, 811 won out. The reason being is that 811 best addressed concerns among stakeholders and the COGCC regarding maps on the COGCC website posing a risk to public safety in that many may rely solely on old or out-of-date information before digging in their yard, instead of contacting 811 directly, as they should under the current system.

From the Denver Business Journal coverage of the meeting:

“’We don’t want someone to use this [public] mapping to go dig a hole in the ground, but it will be strong representation of where the line is,’ Stuart Elssworth, the COGCC’s engineering manager told the commissioners.”

3) What Else Do the New Comprehensive Rules Require?

In addition to requiring operators participate as Tier 1 members of the 811 one-call system, the rules also add additional requirements for flowline installation, testing, registration, and management. The new rules also requires operators to provide pipeline information about existing lines and any assets acquired from predecessors as assets change hands. Additional incident reporting was also added to the language of the revised rules.

“The new regulations are comprehensive and cover every kind of flowline in use throughout Colorado, ensuring safe design and construction while also setting integrity testing requirements tailored to the different kinds of flowlines. Operators’ efforts to promote public awareness will follow the strategic objective in the American Petroleum Institute’s 2017-2019 Pipeline Safety Excellence Strategic Plan and 2016 Performance Report to “promote innovative approaches to enhancing damage prevention.” The report details that initiative and industry’s acknowledgement of areas for improvement and where challenges remain; highlights the public benefits of pipelines; and explains the extensive protections taken by pipeline operators to protect the public and the environment.”

4) The Word of the Day – “Nascent.” Stakeholder Group Moving Forward on Emerging Technologies

The discussion of new and emerging technology used for preventing and detecting leaks and spills from flowlines was labeled by many during Tuesday’s meeting as being “nascent.” Even the city and county of Broomfield and CPC shared this point.

As a result, COGCC agreed on a new stakeholder working group on leak detection technology. Stakeholders will spend time reviewing new technology and reporting back to the COGCC at the end of the 12-month study. 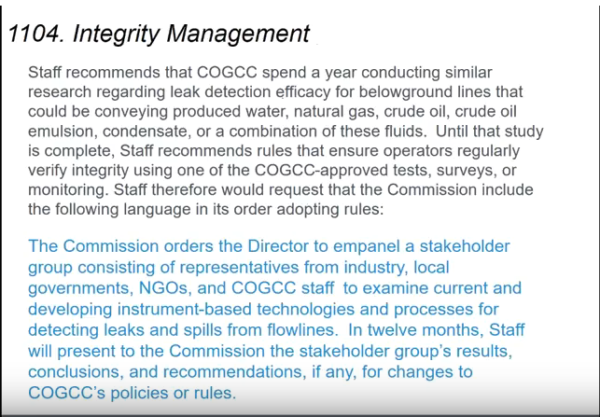 After a nearly six-month process, the COGCC’s new rules expand upon the actions already taken by the oil and gas industry as part of the recent Notice to Operators that required documentation and inspections of equipment and flowlines across the region. The new rules also expand upon existing rules of flowlines to include more flowline testing, more reporting, more monitoring and mapping by which operators will provide the COGCC with maps indicating start point and end points of flowlines. No doubt, the Colorado oil and gas industry is an important economic driver. With such a heavy weight to bear, industry has and will continue to put safety of workers and the public at the forefront of its operations.