New International Agency Agency (IEA) data released today further confirms that U.S. shale gas development is spearheading global efforts to reduce carbon emissions. The IEA reports that global CO2 remained flat for the third year in a row in 2016 at the same time the global economy grew 3.1 percent, “signaling a continuing decoupling of emissions and economic activity,” according to an IEA press release.

Most notably, the IEA reports that,

IEA Executive Director Fatih Birol gave direct credit for the previously unheard of decoupling trends illustrated in the charts below to technological advances that have facilitated the U.S. shale revolution, saying,

“These three years of flat emissions in a growing global economy signal an emerging trend and that is certainly a cause for optimism, even if it is too soon to say that global emissions have definitely peaked. They are also a sign that market dynamics and technological improvements matter. This is especially true in the United States, where abundant shale gas supplies have become a cheap power source.” 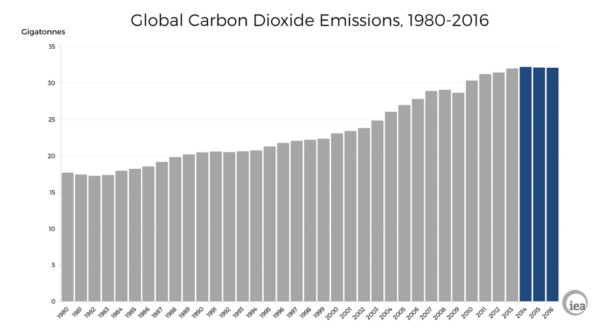 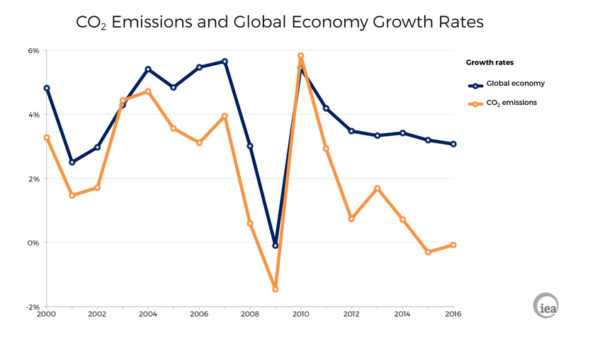 EIA also noted its report this week that the current shift of electrical generation fuels to natural gas has accounted for 63 percent of the 12 percent total reduction in U.S. energy-related CO2 emissions during last decade. As the following EIA chart illustrates, between 2006 and 2014, natural gas has prevented 1.5 billion metric tons of carbon dioxide from being emitted from power plants in the United States. By comparison, the use of renewable energy has prevented 962 million metric tons of carbon dioxide, according to the EIA. 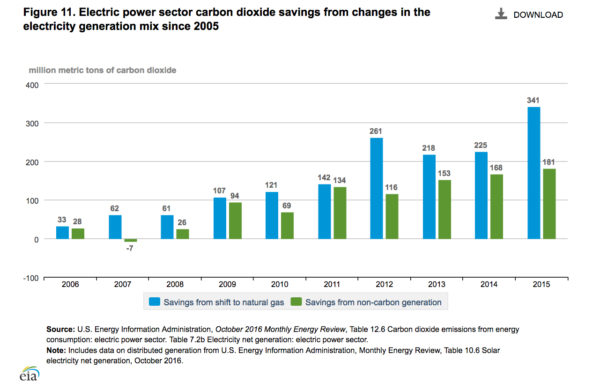 This latest data clearly shows that increased natural gas use — made possible by hydraulic fracturing — is the No. 1 reason the U.S. that the latest EPA Greenhouse Gas Inventory shows that overall CO2 emissions have fallen 11.7 percent since 2005. In fact, this latest data shows the U.S. is now nearly halfway toward reaching its Paris Climate agreement pledge of reducing carbon emissions 26 to 28 percent below 2005 levels by 2025.

Notably, the IEA reports China also saw its carbon emissions fall one percent in 2016, thanks in part to increased natural gas use. And according to the IEA, opportunities for further reductions in China and other Asian nations are possible with even more natural gas use in the future,

“In China, as well as in India, the growth in natural gas is significant, reflecting the impact of air-quality measures to fight pollution as well as energy diversification. The share of gas in the global energy mix is close to a quarter today but in China it is 6% and in India just 5%, which shows they have a large potential to grow.”

Fortunately, IEA and EIA data confirm that the U.S. is positioned to provide the natural gas needed to help these countries tackle GHG reductions. The IEA press release notes,

“With the appropriate policies, and large amounts of shale reserves, natural gas production in the United States could keep growing strongly in the years to come. This could have three main consequences: it could boost domestic manufacturing, supply more competitive gas to Asia through to LNG exports, and provide alternative gas supplies to Europe.”

According to the Energy Information Administration’s (EIA) Short-Term Energy Outlook, U.S. natural gas production is “forecast to average 73.7 billion cubic feet per day (Bcf/d) in 2017, a 1.4 Bcf/d increase from the 2016 level,” which would put U.S. on track to approach the record levels of production seen in 2015.

In other words, the U.S. will not only be positioned to continue the current trend of domestic GHG reductions along with economic growth — it will be in position to help the world achieve this unheard of decoupling via increased natural gas use in the coming years.