A new Potter County group recently formed to advocate for oil and natural gas development and offer a platform for residents to receive reliable information about the county’s growing shale industry. According to its Facebook page, Potter Advocates for Conservation and Energy (PACE) “unifies our voice as we educate and advocate on important energy and conservation issues in God’s Country.”

The group’s June kick-off event brought together local residents and leaders interested in correcting the misinformation that has circulated in their community regarding energy development. 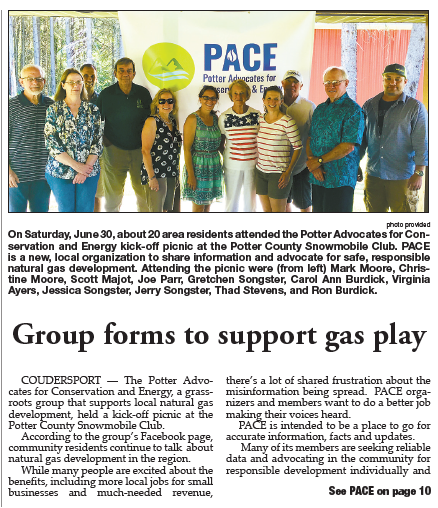 Potter County native and landowner Thomas Ayers – whose family were some of the first to settle in the county in 1804 and still farm the area today – currently resides out-of-state and was unable to attend the picnic, but wrote an op-ed for the Endeavor News describing his opinion on shale development in God’s Country.

Ayers, a retired U.S. Air Force brigadier general who studied energy and the environment as part of National Security Strategy studies at the National War College in Washington D.C., explained,

“As a recently retired Air Force senior leader and a private landowner in the shale gas region, I firmly believe America’s energy abundance, accessible through hydraulic fracturing and horizontal drilling, is a global game-changer for the United States.”

“Contrary to some political noise, energy development is happening safely, clean­ly, and in concert with our values as landowners and the values of conservationists who understand this part of the country’s unique beauty.”

Ayers’ perspective on energy development stems in part from his experiences during his long military career:

“Following more than three decades in uniform, including numerous Middle East deployments, extensive travel throughout Africa, meetings with military leaders in eastern Europe, and time spent in headquarters and air operations centers worldwide, my perspective on the vital importance of American domestic energy development could not be clearer.

“While alternative energy sources are important to our future, access to oil and natural gas is the lifeblood of any developed nation’s economy and will be for decades to come. Economic strength underpins national strength, resolve, and — for the United States — our vitally important role as a world leader.

“Prior to the shale revolution, when our country was energy dependent on foreign (and at times hostile) nations, importing energy from overseas constituted the largest transfer of wealth in human history.

“The unfortunate side effect was use of that wealth transfer by despots and authoritarian regimes – regimes who do not share our values and whose only interests have been and will be to preserve wealth and power at all costs.

“Domestic shale oil and gas development has shifted that balance of power and influence back to the United States. Our country is on track to be a net energy exporter by 2022.” (emphasis added)

Ayers op-ed described the “true global game changer” that Potter County’s shale development can be, but locally this activity has already brought major economic benefits. At the picnic, which took place on one of the hottest Saturdays so far this summer, attendees discussed the much-needed Coudersport pool renovation that will be complete next year and was made possible thanks to a generous donation from the shale industry. That’s just one of many donations the industry has made in the region.

Further, Potter County and its municipalities, have received about $7.5 million in Marcellus impact fees –  combined direct disbursements and Commonwealth Financing Authority (CFA) grants from the Marcellus Legacy Fund – since 2011, according to the Pennsylvania Public Utility Commission (PUC).  This money has been used to reduce taxes, make road and bridge repairs, and for emergency preparedness, among other things, and over $100,000 was placed in the county’s reserve for future use.

PACE will have a booth at the upcoming Eliot Ness, and welcomes interested residents to join its Facebook page or email the group at potterenergyadvocates@gmail.com for more information.