New Mexico is Rich with Oil and Natural Gas Revenue

Prolific oil and natural gas production – particularly in Eddy and Lea counties that sit atop the Permian Basin – is driving a record-breaking revenue year for New Mexico, according to a recent New Mexico Legislative Finance Committee report.

“A historic expansion of oil and natural gas production is providing New Mexico with the opportunity to enjoy strong economic growth for the foreseeable future, including more jobs and increased funding for priorities like public education and infrastructure. The top impediment to continued growth is simply regulatory uncertainty. We can continue to grow as long as New Mexico remains a favorable place to do business, and that should be the objective of our policymakers and elected officials.”

According to the report, general revenue funds for Fiscal Year 2019 (FY19) are “currently tracking nearly $290 million above the forecast,” which the LFC credits to “strong revenues from gross receipts taxes and rents and royalties fueled by the oil and gas production boom.”

Through March 2019, recurring revenue collection is up $1.36 million (29.4 percent) and recurring general fund revenue has increased $153.1 million (26.6 percent) above March 2018 figures. In fact, when tax revenue, rents and royalties from oil and natural gas production, and income from the emergency oil and natural gas tax are combined, New Mexico is expected to receive $370 million more in FY19 than initially projected, helping to fund local schools, infrastructure, hospitals and other public institutions.

Most of this windfall is thanks to the shale revolution in the Permian Basin, which is helping to fuel economic growth and job opportunities across the state. According to the report, New Mexico oil production is up 46 percent this year, while natural gas production grew over 20 percent, far exceeding state projections. In December 2018, the Oil Conservation Division estimated that oil production would jump by only 22 percent, while natural gas would increase by 8 percent.

Even declining oil prices, which usually moderate production estimates, had no effect on New Mexico’s unstoppable trajectory according to the report:

“New Mexico rig counts did not respond to the sharp price drop in ways consistent with past declines…Active rig counts actually increased in the months following the price drop and currently remain in the triple digits.”

This increased production has had significant impacts on the state’s budget. Matched taxable gross receipts (MTGR), which the LFC explains “best represents overall economic activity in the state compared with other tax data,” are up 14 percent fiscal year-to-date. MTGR from the mining, quarrying and oil and gas extraction industries alone increased nearly $1.8 billion dollars, or nearly one-third of the total MTGR year-over-year increase. 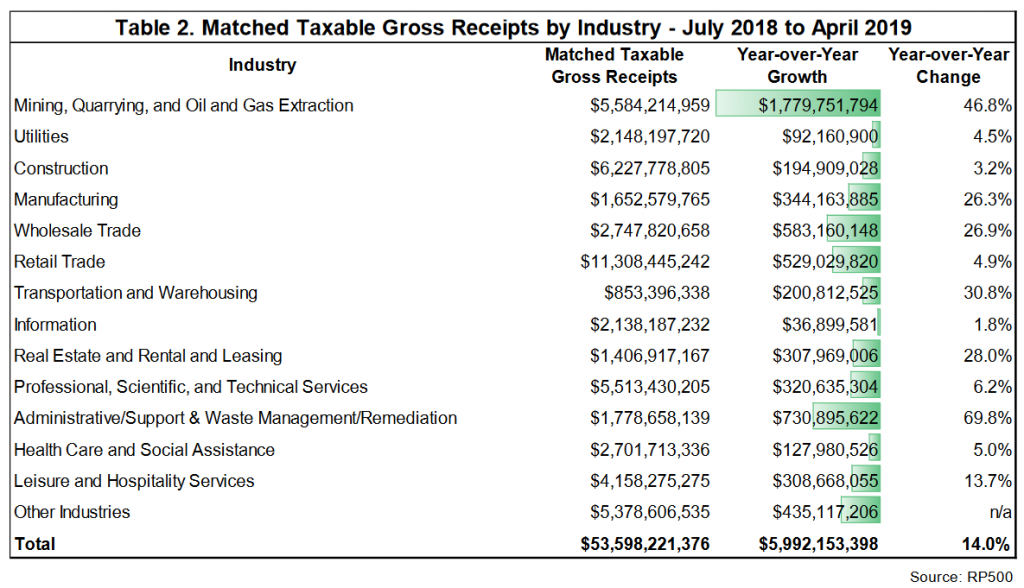 “Other sectors with strong growth include wholesale trade, retail trade, manufacturing, transportation  and  warehousing,  and  real  estate. However, location data indicates growth in many of these sectors is related to activity in the extractives industry. Eddy and Lea counties and out-of-state receipts, which are primarily oil- and gas-related, account for about 86 percent of all MTGR growth.” (emphasis added) 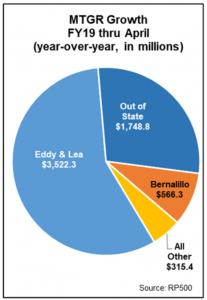 The state’s employment growth also increased to 1.5 percent year-over-year in April, the highest year-over-year growth in employment since December 2014. This growth translated to 13,000 new jobs, with nearly half of those jobs in the mining and construction sectors. Eddy County, which was the top producing natural gas county in the state in 2018, had the lowest unemployment rate in April at only 2.7 percent. 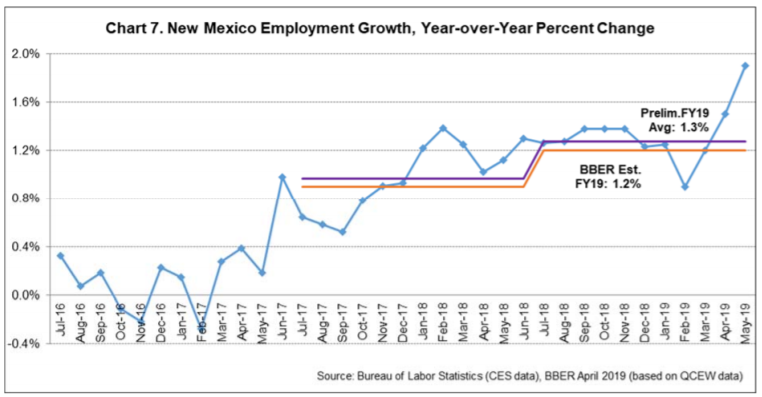 New Mexico’s recent LFC report is just the latest proof that the innovative oil and natural gas industry, which continues to reduce emissions and bolster production, is also helping give back to the communities where they operate.  And there’s still more to come this fiscal year.