Lowering methane emissions is a top priority for New Mexico’s oil and natural gas industry, and its already seeing significant results for these efforts. Ryan Flynn, the executive director of the New Mexico Oil & Gas Association recently wrote an op-ed for the Albuquerque Journal explaining how the state’s oil and natural gas producers can work with governments to protect the environment and build a strong economy:

“As our state and Gov. (Michelle) Lujan Grisham’s administration begin a process to assess how to manage methane emissions, New Mexico’s oil and natural gas industry is a willing partner.

“While all who work in the oil and gas industry take pride in what we contribute to New Mexico’s economy and public schools, there is nothing we value more than safeguarding the people and places we care about the most. That means working continuously to protect the environment and reduce and control methane emissions. It’s a responsibility we take personally.”

Technology is the Key to Reducing Emissions

As Flynn also explains, innovation and technology are the key to reducing emissions in New Mexico and elsewhere:

“As an example of these innovative technologies, infrared cameras that show gases not seen by the naked eye and internet-enabled devices monitor production equipment and facilities for leaks or other anomalies. These devices can notify operators in real time, which allows for potential issues to be addressed more quickly.”

In addition to the technologies Flynn highlighted, companies have also begun to reuse the associated natural gas that is produced during Permian oil production. Currently, there is limited pipeline takeaway capacity in the Permian for this supply of gas, so in an effort to reduce flaring, producers are injecting the excess gas into less productive, older wells to stimulate greater oil output from them. As Bloomberg reports:

“The methodology’s been used in conventional wells elsewhere with both natural gas and carbon dioxide for years, but it’s just now emerging in America’s fracked shale fields. The win-win goal: The trapped gas is put to work, and there’s a 30 percent-to-70 percent gain in oil output from older wells. As the shale boom ages, the potential could be extensive.”

It’s all part of a massive effort by U.S. oil and gas companies to use technology to reduce emissions. According to a study commission by the American Petroleum Institute, the sector invested $108.2 billion in technologies aimed at reducing greenhouse gas emissions from a variety of sources.

A recent Energy In Depth analysis found that U.S. methane emissions fell by 24 percent from 2011 to 2017 even while the country’s oil and natural gas production rose by 65 and 19 percent respectively.

In the Permian Basin – located in New Mexico and Texas – the advancements have been particularly significant. In one of the top producing regions in the country, annual methane emissions from fell from 4.8 million metric tons (MMT) to 4.6 MMT from 2011 to 2017. Simultaneously, combined oil and natural gas annual production jumped from 638.9 million barrels of oil equivalent (Boe) to 1.4 billion Boe. The result was a 57 percent reduction in methane emissions per unit of oil and natural gas produced. 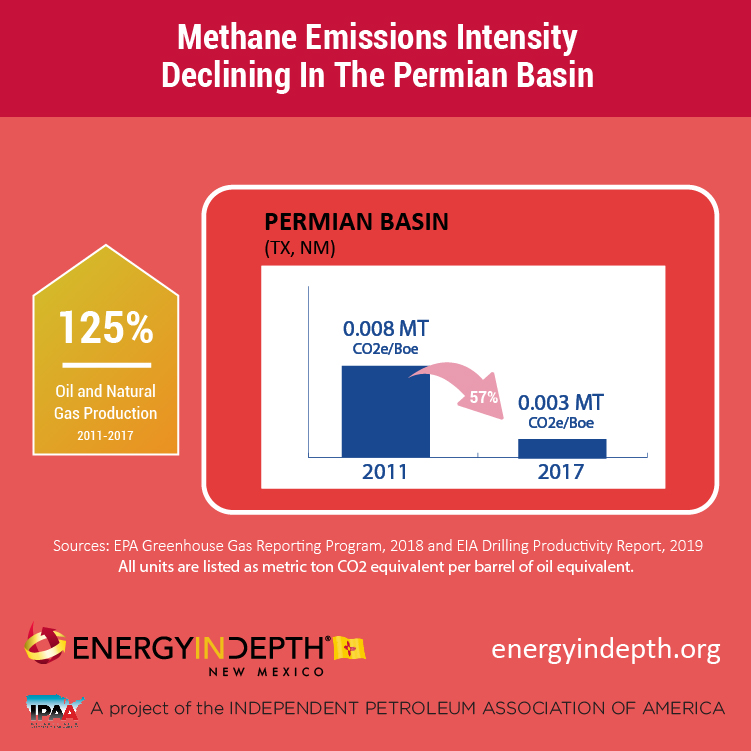 In another key data point, researchers at NOAA and the University of Colorado found that methane emissions are much smaller than previous studies have estimated. In some cases, the emissions from oil and natural gas have been overestimated by as much as 10 times.

Progress Through Partnership, Not Conflict

Flynn’s column exemplifies the way forward for the energy industry and the environment through partnership and collaboration:

“We stand ready to work in partnership. By working together – industry and government – we can create a path forward that ensures the viability of New Mexico’s most important industry while protecting the environment for our future generations.”

The benefits of this partnership are clear. In states like New Mexico, oil and natural gas provide a crucial funding stream for education, providing nearly a third of the revenue taken in by the state.

And natural gas has proven to be an important complimentary power source for renewables when wind and solar aren’t able to meet electricity demands.

New Mexico is a great example of how partnership will benefit both the economy and the environment.