New Natural Gas Plant Up and Running in Eastern Ohio

Utica East Ohio (UEO), a joint venture by Access Midstream, M3 and EV Energy Partners, became the first fully integrated gathering, processing and fractionation complex to be put into operation in on July 28th in eastern Ohio.   The $900 million project began construction last year, with the first of three processing trains up and running in less than 10 months. As Mike Stice, CEO of Access Midstream noted:

“This heroic accomplishment was the direct result of a collaborative effort between Access and M3 to meet our upstream customer needs. Access provided the gathering and compression while M3 delivered on the processing and fractionation. Together, phase one of this multi-phase development resulted in 200 MMcfd of capacity being placed in operation both on time and on budget.”

With the liquids rich gas coming from the Utica, the build out of midstream infrastructure is needed to capture all of the natural gas liquids like, ethane, propane, pentane and butanes that make the Utica so attractive to operators.  Thanks to investments by UEO and MarkWest, operators are now able to put their wells into sales instead of having them shut in waiting for the infrastructure to come online.

The initial phase of the UEO project is now capable of processing 200-million cubic-feet-per-day at their cryogenic processing facility near Kensington as well as processing 45,000-barrels-per-day of natural gas liquids at their fractionation, storage and rail facility near Scio. 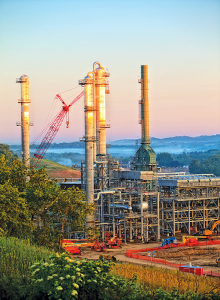 Frank Tsuru, President and CEO of M3 Midstream LLC, pointed out that the project will help ensure a more reliable supply of natural gas for consumers:

“Completing the first stage of this project is an important milestone in advancing the development of the Utica Shale formation in Ohio, as wells can begin producing both natural gas and natural gas liquids, with this processing system getting those products an important step closer to homes, businesses and industrial users.”

The construction of the UEO facilities created more than 1,700 jobs, with more than a dozen Ohio companies engaged in the project. Now that the first phase is operational, UEO will have 50 employees to operate the facilities and an additional 15 jobs needed to operate the rail terminal at the Scio plant.

It’s worth stressing: More than 60 percent of operations workers are Ohio residents.

UEO is still in the process of constructing its second phase, scheduled to be complete in December of 2013, with a third phase to follow.  When complete, the UEO project will include 800-million cubic-feet-per-day of cryogenic processing, 135,000 barrels-per-day of natural gas liquids fractionation, 870,000 barrels of natural gas liquids storage and a rail facility capable of loading 90 cars per day.

The significant investment made by Access Midstream, M3 and EV Energy Partners signifies the Utica is moving from the exploration phase to the production phase.  As the Utica continues to grow, UEO will play a key role in guaranteeing consumers are benefitting from safe and efficient operations.