The poll shows 84 percent of Buckeye State residents say they would like to see energy development increase in the United States. Support for more energy infrastructure is even stronger, as 86 percent of respondents say they support construction of more pipelines, natural gas compressor stations and power plants.

The survey also found broad bipartisan support for energy development despite the fact that 88 percent of voters consider themselves to be “environmentalists.”

These findings clearly show that when it comes to natural gas, public support in Ohio is widespread and intense. 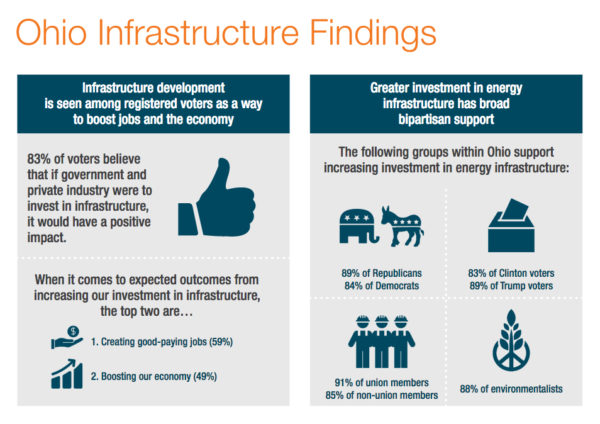 Respondents were asked whether they identify themselves as Democrats or Republicans, and survey results found participants from both parties overwhelmingly support energy infrastructure. Respondents also said they believe increasing energy infrastructure will lead to good paying jobs and boost the economy. This sentiment is not surprising, considering Ohioans have been reaping the benefits from Utica Shale development for the past five years.

Another interesting factoid from the survey was that it showed only nine percent of respondents oppose increasing energy development in Ohio. This is also not surprising considering fringe environmental extremists are in fact few and far between — despite what misleading headlines might lead you to believe.

The fact that oil and natural gas provide a feedstock for manufacturing could be one reason respondents showed overwhelming support for energy development. This sentiment was echoed by Eric Burkland, president of the of the Ohio Manufacturers’ Association who stated,

“Buckeye State voters overwhelmingly support infrastructure investment because they know it will improve our standard of living. From the pipeline infrastructure to get Utica Shale resources to market, to locks and dams along the Ohio River, to maritime and transportation infrastructure along Lake Erie, public and private investment in these areas will help get Ohioans working again and revitalize our manufacturing base for years to come.”

This new poll essentially confirms what we have known for years — Ohioans overwhelmingly support more natural gas development. It’s a win for the environment and a win for the economy.