With one year to go before voters cast their ballots in the 2016 elections, a new poll shows that Americans overwhelmingly support domestic oil and gas development. Conducted for the American Petroleum Institute (API) by Harris Poll, the new poll shows that nearly 80 percent of those surveyed said they favor increased shale development, believing it will lead to economic growth and bolster the nation’s energy security. 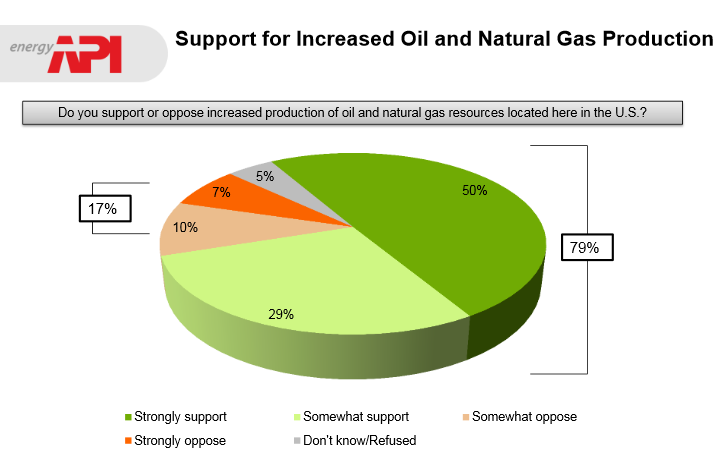 The poll shows that support for increased oil and gas development crosses party lines. Among those surveyed, “71 percent of voters say they are more likely to support a candidate who supports producing more oil and natural gas, (64 percent of Democrats and 85 percent of Republicans).” Those results were highlighted by API President and CEO Jack Gerard as a message to office seekers in the coming elections. From the API press release announcing the poll:

“Pro-energy policies are a clear winner because likely voters from both parties recognize its key role in job creation and economic growth,” said API President and CEO Jack Gerard. “Voters say they support candidates who stand behind pro-development, all-of-the-above energy policies. The results of our poll provide a lesson for candidates running in 2016: pro-energy policies win.”

The poll also highlights that Americans see a strong connection between pro-energy policies and issues they identify as important, such as jobs and the economy along with national security. A staggering 86 percent of those polled believe increased oil and gas production “could lead to more U.S. jobs” while 84 percent “recognize it could stimulate our economy.” And along with creating jobs and economic opportunities, 85 percent said that increasing production “could strengthen America’s energy security.”

API’s poll is the latest in their “What America Is Thinking On Energy Issues” that has been finding similar trends among state voters. Released ahead of the Republican Presidential Debate in Boulder, a Colorado Petroleum Council (CPC) poll found that among the state’s “swing state” voters, “majorities of Republicans (95 percent), Independents (84 percent) and Democrats (69 percent) say that producing more oil and natural gas here in the U.S. is important to them.” CPC, a division of API, touted the support for domestic energy production in a press release:

These polling trends tilting toward widespread support of shale development among the American public are bad news for activist organizations who oppose fracking at every turn. And as these groups grow increasingly extreme, it is likely that support for their efforts to ban fracking will only continue to erode.