Experts widely agree the United States is positioned to see record-breaking oil and natural gas production in the coming years, along with continued record-breaking crude and LNG exports. Though it sounds like a broken record (but has a broken record ever sounded so good?), it bears repeating this wouldn’t be happening without incredible advances in horizontal drilling and hydraulic fracturing technology.

But it is also important to understand the significant role the refreshing new environment of regulatory sanity will likely play in the industry’s bright future.

A number of duplicative, unnecessary and expensive regulations and policies have either been put on hold or scrapped altogether so far in 2017, as the following IPAA graphic shows. 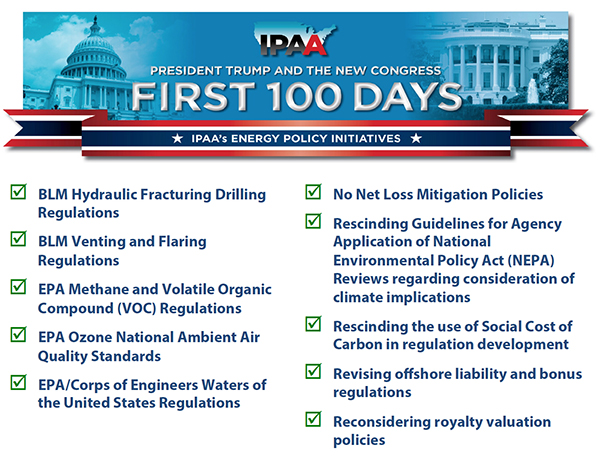 Each would have significantly inhibited achieving the energy independence now clearly within our reach, all while yielding no significant environmental benefits. Let’s review the most notable examples on the above list.

EPA announced in June its intent to delay for two years the Obama administration’s New Source Performance Standards (NSPS) targeting methane in order to reconsider certain aspects of the rule. Critics of the rule have flagged numerous flaws with the regulation, and EID has noted numerous times that the rule is a solution in search of a problem, based on the fact that methane emissions have fallen at the same time oil and gas production has soared.

EPA data also show that the methane leakage rate from natural gas systems is just 1.2 percent — well below the threshold (3.2 percent) for natural gas to maintain its climate benefits. Numerous other studies show the same.

EID research has shown EPA’s methane regulations will have virtually no climate impact — reducing global temperatures a mere four one-thousandths of one degree by the year 2100. And the rule would also be much more expensive than proponents have led on. A recent ICF study found EPA’s regulations would be nearly five times greater than an EDF sponsored ICF analysis indicated.

The U.S. Interior Department in June postponed indefinitely the January 2018 compliance deadline for venting and flaring components of the BLM methane rule that would require emissions controls on existing sources. Similar to the EPA methane rule, the rule was widely criticized for being unnecessary and expensive.

The latest EPA data show that methane emissions from venting and flaring have plummeted 77 percent since 2011 at the same time oil production has increased 67 percent. In fact, the EPA’s latest Greenhouse Gas Inventory notes,

The financial burden of mandating installation of new and costly technology on all wells on federal lands would be devastating, considering a vast majority of those wells are older, marginally producing wells that are typically located in remote locations. One study finds the rule would reduce already declining production on federal lands by more than 112 million barrels of oil.

And then there’s the legitimate question regarding the legality of the rule. Though it was supposed to be about reducing waste, the Obama administration sold the rule partially on the basis that it would address air quality, specifically global warming. Congress has delegated air quality regulation to the EPA, not BLM. And even by BLM’s most ambitious estimates about the rule’s impact, it turns out it will only reduce global greenhouse gas emissions by 0.0092 percent.

New Mexico Gov. Susana Martinez (R) put it well in a letter to House Speaker Paul Ryan (R-Wis.) when she noted, “Royalties paid to state and federal governments will decrease, new development on federal lands will stagnate and jobs will be lost if the Venting and Flaring Rule is not repealed.”
That almost happened in the spring when the BLM narrowly eluded extinction via the Congressional Review Act. Though environmentalists celebrated the CRA outcome, the future of the rule remains bleak.

Interior Department Order to Speed up Permitting on Federal Lands

U.S. Interior Secretary Ryan Zinke signed an order this month that will expedite permit approvals and require that more lease sales be held on federal lands.

Zinke said of the order: “Oil and gas production on federal lands is an important source of revenue and job growth in rural America but it is hard to envision increased investment on federal lands when a federal permit can take the better part of a year or more in some cases. This is why I’m directing the BLM to conduct quarterly lease sales and address these permitting issues.”

As EID highlighted on the blog recently, oil and gas development in western states with considerable acreage of federal lands under the Bureau of Land Management (BLM) jurisdiction has been stifled in recent years by a stagnant permitting process. BLM currently has a backlog of more than 2,800 Applications for Permit to Drill (APD) and has seen the review period exceed 257 days on average — eight times the statutorily indicated 30 days. In some extreme cases, the permitting process has been delayed for years, costing these states millions in much-needed revenue. A total of 11 scheduled quarterly leases were either canceled or postponed in 2016 alone.

These issues considered, it’s no wonder a recent American Petroleum Institute (API) report noted that the contrast between recent production on federal lands vs. private lands is difficult to ignore:

“Between 2010 and 2015, the percentage of the nation’s crude oil produced on federal land decreased from 35.7 percent to 21.0 percent. And according to the Bureau of Land Management, the number of drilling permits issued on federally controlled onshore land dropped by 47 percent from 2008 to 2015. Further, federal data show crude oil production remained flat between 2010 and 2015 on federally controlled land, while natural gas production declined 27 percent.

“In contrast, on private and state lands, where drilling typically does not require federal approval, production increased 115 percent for crude and 66 percent for natural gas from 2008 to 2015. The stark difference between production on federal land and state and private land is not just due to ineffective and inefficient national energy policy; it’s also bad federal fiscal policy. If production on federal lands had grown at the same rate as overall U.S. production, from 2009 through 2015, total royalties would have been 31 percent higher, with an additional $20 billion in royalties collected by the federal government.”

The Trump administration in March announced it will repeal the Obama administration’s duplicative rule on hydraulic fracturing on federal lands. The announcement came after a review “revealed that the 2015 final rule does not reflect those policies and priorities” of the current administration.

This rule was being pushed even though states have been effectively regulating fracking and well construction on sites operating on federal lands for decades. It would have set federal standards for integrity of well casing, storage of waste fluids and public disclosure of the chemicals used overriding current state standards — all of which are already regulated at the state level.

The rule was already in limbo after a Wyoming federal judge blocked the rule last year due to the fact that the BLM is prohibited by federal law from regulating fracking. The rule was in the appeals process when the Trump administration made its announcement.

Considering the issues with permitting and lease sale issues already plaguing development on federal lands — and the possibility of the BLM venting and flaring rule being implemented — it is believed this rule could have stopped development altogether on federal lands.

The Trump administration’s March Energy Independence Executive Order ordered EPA to reconsider the Oil and Natural Gas Sector: Emission Standards for New, Reconstructed, and Modified Sources — better known as “Quad Oa” regulations — which were finalized in 2016. EPA announced in April intent to grant a reconsideration of the “Quad Oa” regulations and stay a June 3 compliance date for 90 days, as EPA takes public comments.

Designed to address fugitive emissions from equipment and processes in the oil and natural gas industry by requiring leak detection and repair programs, critics argued the rules were duplicative, expensive and unnecessary.

The refreshing theme of positive oil and gas industry news has continued this week, as the International Energy Agency released a report Thursday finding the United States could very well challenge Qatar and Australia for the title of top LNG exporter in the next five years and generate almost 40 percent of the rise in global gas output between 2016 and 2022,

“The U.S. shale revolution shows no sign of running out of steam and its effects are now amplified by a second revolution of rising LNG supplies,” IEA Executive Director Fatih Birol said in a statement.

The Energy Information Administration (EIA) also reported this week that LNG exports will quadruple this year from their 2016 levels. A recent Louisiana State University report projects natural gas production records will be broken on a regular basis throughout the 2020s. EIA has projected record oil production of 10 million barrels a day as early as this year, and record crude exports of 1.2 million barrels a day are expected to jump to 2.25 mbpd in 2020.

Obviously, this wouldn’t be happening without fracking. But the current common sense regulatory environment will help facilitate this remarkable march toward energy independence as well.”