A new report published in the August edition of Agricultural and Resources Economics Review attempts to undermine the job creation and economic development that has taken place over the last decade thanks to shale development. According to the researchers, countywide employment and wages varied little in counties on either side of the Pennsylvania-New York border despite Pennsylvania’s ability to develop their shale resources. From the report :

We find that shale gas development in Pennsylvania is not leading to broader economic growth (captured as total employment and wages in Pennsylvania) and is associated with potentially offsetting reductions in manufacturing employment. (emphasis added, Pg. 37)

According to the report’s authors, they only measured economic growth in terms of total employment and wages in Pennsylvania. What researchers conveniently leave out are the amount of auxiliary jobs created to support this industry and the vast amount of tax revenue generated for local communities through impact fees.

First let’s look at the job growth that’s occurred in Pennsylvania thanks to continued shale development. Pennsylvania counties that have developed their shale resources have continued to have low unemployment rates when compared to the state and national average, year-over-year. 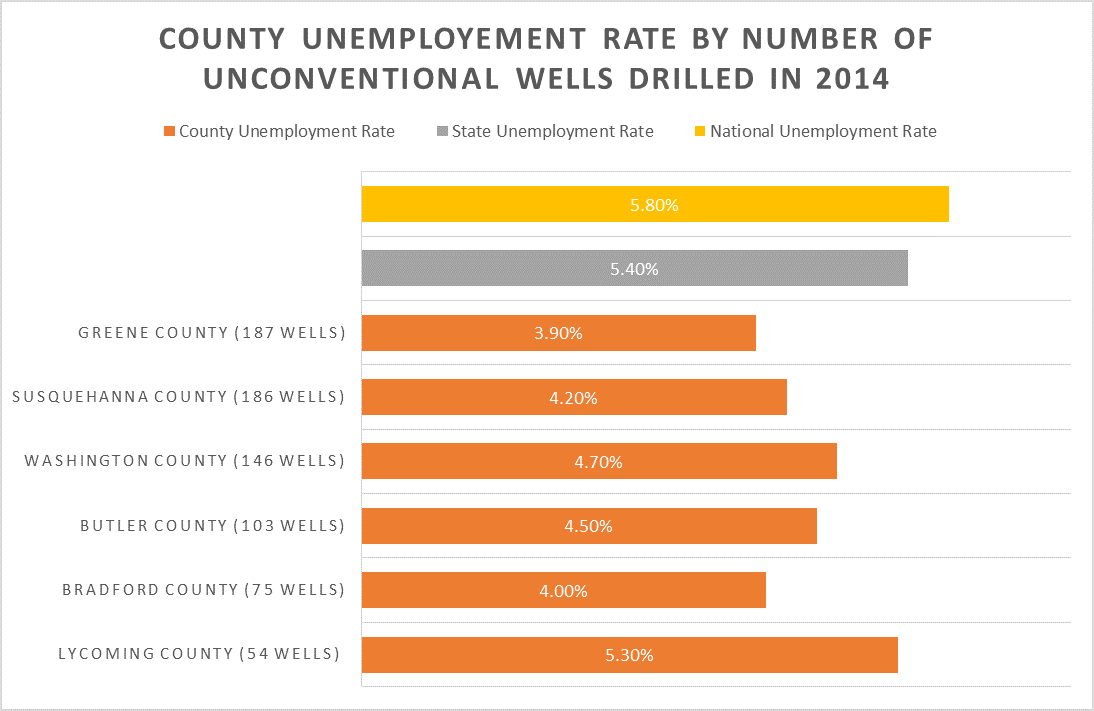 This isn’t even touching on the thousands of jobs that are not necessarily classified as construction or natural resources and mining industries that this report focused on, but resulted from shale development nonetheless. These are entrepreneurs that saw opportunity and worked to create new businesses which, in turn, created local jobs. For instance, take a look at Hog Fathers BBQ in Southwestern Pennsylvania. What started out as a small company with 10 employees that catered food at well sites, has now turned into a multimillion dollar business with 80 plus employees. According to Hog Fathers BBQ owner, Frank Puskarich:

“There’s quite a bit of other work that’s created because of the business I do, one business feeds off another business.”

Another example is Rig Maids that began as a cleaning service for office and living quarters on well sites at the beginning of the Marcellus boom in Lycoming County, and has since opened two other offices in Southwest Pennsylvania and Ohio.

Pennsylvania also has some big projects coming to the state because of the development of affordable, clean natural gas. There are numerous proposed natural gas fired power plants that will create hundreds of jobs and millions of dollars in community investment projects.

Another thing left out by this economic report are the impact fees that have generated $850 million for local communities across the Commonwealth. This new revenue stream flows directly into local communities and helps offset projects costs, which would normally come from tax payers. That means more disposable income for those living in these communities and an overall stronger economy.

The economic report also took a jab at manufacturing in Pennsylvania stating:

“…However, we also find an offsetting reduction in employment in the manufacturing sector and no statistically significant effects from fracking on total employment and wages at a local level. The results present a nuanced view of the often isolated impacts of shale extraction on local economies associated with the Marcellus.” (Pg. 22)

Before shale development energy intensive American manufacturing projects were being outsourced to countries with more affordable energy. Now, thanks to Marcellus shale development American manufacturing is being re-shored and supports millions of jobs across the country – over 567,000 jobs in Pennsylvania alone. According to a report for the U.S. Conference of Mayors:

“Energy-intensive manufacturing employment will expand by more than 1 percent per year nationwide, with 72 percent of those jobs in metropolitan areas, noting that the Marcellus shale play in Pennsylvania and Bakken shale drilling in North Dakota significantly fueled that expansion.”

When looking across the border in New York, the economic report asserts that there wouldn’t have been any significant change in the local economy, stating:

“We find that shale gas development significantly increases employment and wages in the construction and natural resource and mining industries but not in the entire economy at a county level. We find no statistically significant change in employment, earnings, or per capita personal income at a zip-code level and a reduction in employment in the manufacturing sector.” (Pg. 37)

While Pennsylvania counties continue to develop their shale resources they show lower than average unemployment numbers. But moving across the border into New York tells a completely different story. According to a recent jobs report, New York Southern tier counties actually lost jobs between 2009 and 2014. And according to a report from Fox News,

“Cuomo’s decision risks up to 54,000 fracking-related New York jobs — jobs that don’t exist now since fracking is not allowed, but could have been generated with the approval of various projects in the future.”

This newest economic report clearly misses some key points when discussing shale development’s role in Pennsylvania’s economy. Even in this industry downturn, jobs are still being created with a stronger focus on pipeline infrastructure and end use of natural gas. Lastly, no one can argue that these opportunities would have been welcomed with open arms from residents in New York’s Southern Tier.