The soaring U.S. energy economy, bolstered by increased oil and natural gas production, is leading all sectors in creating and supporting high-quality jobs, a new analysis shows. According to the 2019 U.S. Energy and Employment Report , from the Energy Futures Initiative (led by former U.S. Energy Secretary Ernest Moniz) and the National Association of State Energy Officials, “the traditional energy and energy efficiency sectors continued to outperform the economy as a whole, adding 152,000 new jobs” in 2018.

The report, based on employer data collected in the fourth quarter of last year, found that the energy sector as a whole –traditional energy and energy efficiency — employed approximately 6.7 million Americans, or about or 4.6 percent of the U.S. workforce. Employment in these sectors increased by 151,700 net jobs from 2017, a gain of 2.3 percent. These jobs represented almost 7 percent of all new U.S. jobs.

The fuels sector, which includes oil and gas exploration and extraction, employed 1,127,600 workers, an increase of 52,000 or 4.8 percent in 2018. Petroleum fuels added the most jobs of any traditional energy sector, with 33,500 new positions, an increase of 5.9 percent. Natural gas extraction increased employment by 6.8 percent, adding 17,000 jobs.

“[O]il and gas production added the most new jobs in the traditional energy sectors as efficiencies and increased prices brought thousands of workers back into the oil and gas fields of Texas, Oklahoma, North Dakota, and Pennsylvania. Employment in oil and gas extraction and support services is at its highest level since its recent high in the fall of 2014.”

Not only is the American energy economy creating more jobs, but those positions tend to pay more than other sectors. A Wall Street Journal  interactive feature compares salaries to the median pay at thousands of companies in a variety of industries – energy, technology, industrials, consumer, health care and finance. The upshot? Energy companies pay the highest median salary – around $115,000 per year. The median wage for an American with an advanced degree is $77,324, and the annualized median wage overall for U.S. workers in the fourth quarter of 2018 was $44,564, according to the Bureau of Labor Statistics. 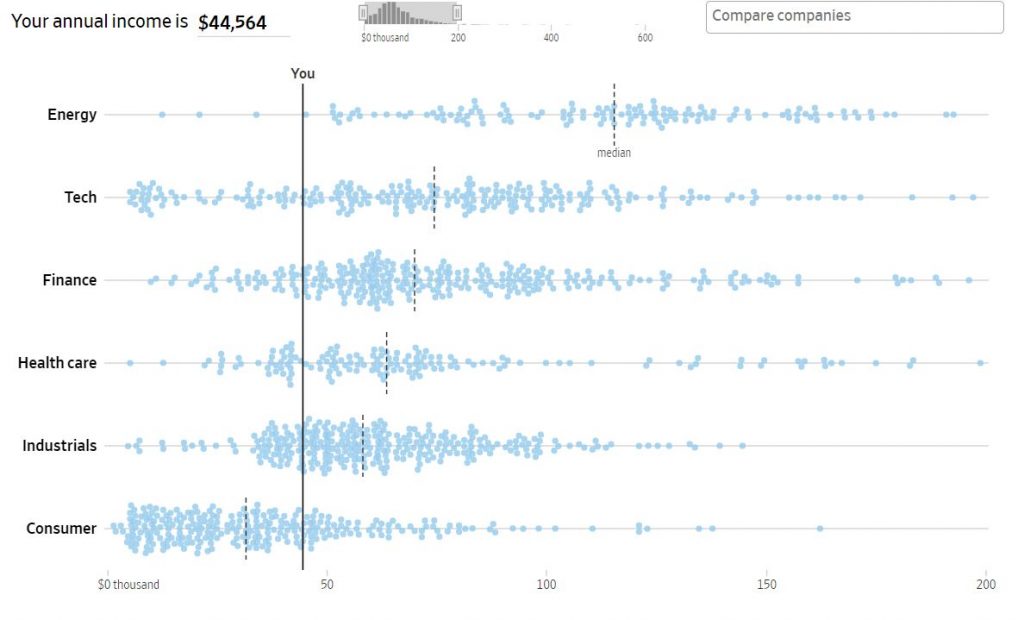 Additionally, a new report from Oil & Gas IQ provides reason to be optimistic that women will continue to join the energy industry not only in increasing numbers but in more senior and technical roles.

“[D]espite the global concern around the lack of female representation in energy, the status quo is finally being challenged. More women are claiming to work in a technical role than ever before, contrary to popular belief. There is also better representation of females in management, as well as a strong count in the younger age groups…”

“In 2010, studies revealed that the majority of women working in oil and gas were working in administrative and corporate roles – with a severe lack of women working in the fields of engineering and senior management. According to the latest report, these trends have been almost completely overturned – with engineering now being the primary area in which women are working. The improvement to managerial positions is also encouraging, as this may signal a shift in the make up of decision-making units, and therefore future recruitment drives.”

It’s no surprise that America’s energy industry is creating jobs well ahead of the economy as a whole. We already know that the United States has become as a global energy leader, thanks primarily to horizontal drilling and fracking. We have surpassed Russia as the world’s largest crude oil producer, and U.S. natural gas production is also on pace to break records. We are exporting more oil and gas than ever and we will become a net energy exporter in three years.

All of this dramatic growth is occurring while proven U.S. oil and natural gas reserves are at an all-time high and while we are leading the world in carbon emissions reductions. This is the definition of win-win.