The Appalachian Basin is now the most profitable place in the United States to build a petrochemical plant, according to new research from IHS Markit. And this isn’t just by a small margin – the report finds that Appalachia’s Ohio River Valley has four times the net present value compared to other regions of the country. 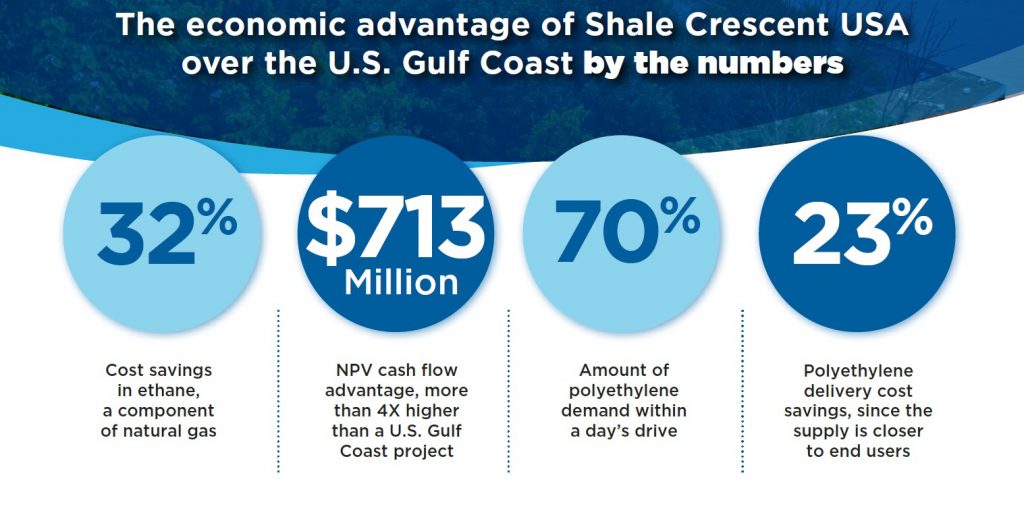 The IHS Markit report adds to a growing body of research on the important role the Appalachian Basin will play in the future of the petrochemical industry. For instance, the American Chemistry Council’s recent report entitled “The Potential Economic Benefits of an Appalachian Petrochemical Industry” found the region could be the “second center of U.S. petrochemical and plastic resin manufacturing, similar to the Gulf Coast” and as a result could see up to 100,000 permanent new jobs by 2025.

Encouraging investment and making this a reality is something the U.S.  Department of Energy (DOE) is “working on actively.” DOE Sec. Rick Perry recently told lawmakers that he plans to transition Appalachia into a petrochemical refining center, and he testified before Congress that investment in the region is a priority for national security, explaining,

Shale Crescent USA, an economic development initiative to encourage business growth in the Ohio River Valley, commissioned this new report, which makes the business case for investing in Ohio, Pennsylvania, and West Virginia.  Why is the Appalachian Basin so appealing?

“For the first time in history, companies can now position themselves directly within the greatest region of supply as well as the greatest area of demand.”

“The Shale Crescent USA region boasts a number of major advantages, including access to some of the lowest natural gas prices in the developed world from the abundant Marcellus and Utica Shale formations. When taken with the close proximity to more than two-thirds of the domestic market for polyethylene consumption, it means we are the most lucrative location for a petrochemical manufacturing facility.”

“There is little doubt that due to this natural resource below our feet, Eastern and Southeastern Ohio, and the surrounding area, sits at the center of America’s energy renaissance. We have an abundant natural gas supply, access to water, proximity to major markets, and a ready and skilled labor force. It’s a major reason that an international petrochemical company is considering building an ethane cracker plant in Belmont County – which would be the largest construction project in Ohio history.”

And, as Congressman Johnson explained, investment in the region has already been occurring. Royal Dutch Shell recently began construction on its world-class ethane cracker facility in Pennsylvania, and it appears PTT Global Chemical will announce more concrete plans for a similar facility in Ohio in the near future. In line with the IHS Markit report, Shell explains on its website that, “Locating the facility close to both supply and markets will reduce economic and environmental transportation costs…”

A bipartisan group of elected officials from Ohio, West Virginia, and Pennsylvania has also been aggressively pushing for more investment in the Appalachian region, and this week economic development groups from the tri-state area are headed to the World Petrochemical Conference to lobby for their shot at the next major petrochemical plant investment.

Shale development has brought a new hope for this region of the country, and is the key to a manufacturing renaissance taking place in the United States. With each new report it becomes clear: Shale has given the Appalachian Basin “a shot at this historical region-changing event.”