EID recently exposed how the Environmental Protection Agency’s (EPA) new regulations targeting methane leaks from fracking and other oil and natural gas activities are based on flawed emissions assumptions, which will likely lead to the new rule being a whole lot more expensive than the agency is letting on.

EPA has claimed the projected benefits from the rule’s mandated emissions reductions – which it determines by calculating the “social cost of methane” (SC-CH4) – will not only offset the compliance costs, but will result in significant monetary net benefits. But NERA finds that the opposite is likely to occur:

“…we find a high likelihood that the Proposed Rule will result in negative net benefits, contrary  to the RIA’s (Regulatory Impact Analysis) conclusions… The alternative estimates (used by NERA) show that the SC-CH4 estimates could be 90% to 94% lower than the EPA’s SC-CH4 estimates.”

NERA reached its conclusion by analyzing several technical issues with the EPA’s process of estimating its RIA, finding the EPA’s net benefit claims are “completely unreasonable” and that the agency’s estimated benefits are “highly uncertain and very likely overstated.”

Here are the five reasons NERA feels the EPA’s promise of net benefits from its new methane rule on new and modified oil and gas infrastructure are disingenuous at best:

Reason #1: EPA’s rule is based on single study that shows higher net benefits than all other reputable reports

Though studies on the social costs of non-CO2 greenhouse gases are limited, a handful have been released in recent years. The majority of them have one thing in common: They show much lower social costs from methane emissions. Marten et al. is the only study showing higher social costs.  That happens to be the lone study the EPA chose to draw its conclusions from (which isn’t surprising, considering it was written by EPA staff). The following table taken from the NERA analysis illustrates the wide divide between Marten et al.’s social cost of methane estimations and the other reputable reports on the subject: 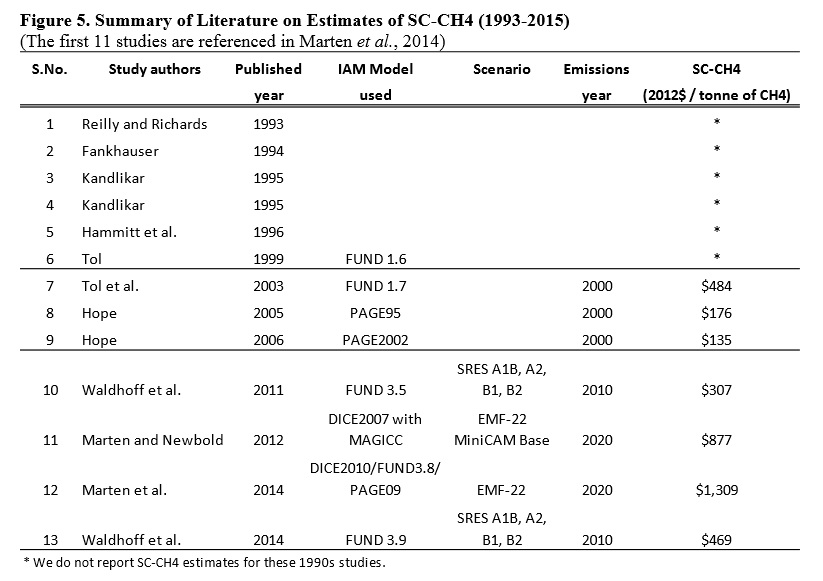 NERA acknowledges that Marten et al. used the most recent and widely accepted Integrated Assessment Models (IAM) to simulate the damage per ton of methane. But Waldhoff et al., which was also released in 2014, used even more up-to-date IAMs and found social costs 64 percent lower than Marten et al., leading NERA to conclude:

“Such variability in the literature, combined with the fact that EPA’s values are much higher than any of the other six estimates is a clear sign that the RIA may be overstating the Proposed Rule’s global benefits.”

Though the EPA’s rule would obviously only regulate methane emissions on a domestic scale, the climate benefit estimates presented by Marten et al. are on a global scale. Predictably, this leads to an overestimation of benefits by roughly 75 to 94 percent, according to NERA analysis, and does not follow benefit-cost analysis protocol established by the Office of Management and Budgets Circular A-4 (OMB, 2003):

EPA chose not to do the latter, and NERA argues that by listing global benefits only, EPA is deliberately misleading readers and overstating the benefits that the U.S. can expect as result of the methane rule, in addition to being consciously inconsistent with the theoretical underpinnings of benefit-cost analysis precedent.

EPA tries to justify this method by arguing the use of global figures encourages reciprocal actions by other nations and leads to international cooperation in reducing greenhouse gases. NERA argues the latter is certainly not happening at the time being. Furthermore, NERA argues, domestic effects should be the focus of any analysis being used to influence U.S. policy. Essentially, if a policy can’t pass a domestic cost/benefit test, it isn’t good policy even if it passes a global cost/benefits test.

The EPA’s RIA for its new methane rule followed the example an Interagency Working Group’s (comprised of several executive branch agencies and offices) model for the 2010 Social Cost of Carbon (SCC) report. For the SCC, the IWG claimed it was not able to calculate domestic SCC estimates for various reasons, and the EPA used the same excuse to justify leaving domestic estimates out of its RIA.

But NERA was able to produce domestic SC-CH4 estimates by using two IAMs employed in the EPA’s SC-CH4 RIA — the Policy Analysis of the Greenhouse Effect (PAGE) and Climate Framework for Uncertainty, Negotiation and Distribution (FUND) models. The results show that had the EPA chosen to list domestic and global “social cost of methane” (SC-CH4) it would have provided proper context, reducing its RIA estimates anywhere from 76 to 94 percent, or a range of $78-$342 per tonne, as the NERA chart below illustrates: 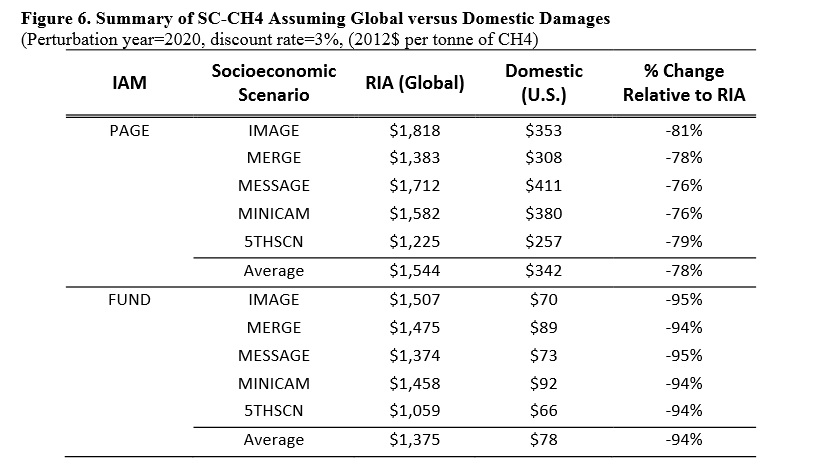 Of course, listing these domestic estimates would have demonstrated clear net costs for the proposed methane rule, which would have made it much more difficult for EPA to convince policymakers that its rule would benefit their constituents.

EPA uses the same formula it used to calculate CO2 social costs in its 2010 SCC in its methane analysis. But NERA points out that its inclusion of a 2.5 percent discount rate overstates the upper end of its estimate because it is inconsistent with the short atmospheric lifespan of methane, which has an atmospheric half-life of just 12 years.  In its SCC work, IWG argued that a discount rate of 2.5 percent is based on the intergenerational impacts of CO2 due to its long lifespan in the atmosphere. Essentially, applying the same percentage to methane results is an apples-to-oranges comparison, since it has no long-term, inter-generational effect.

NERA argues the latter fact discredits EPA’s rationale for adopting the same discount rates used for CO2 — apparently, to achieve estimates that were consistent with the SCC — even though methane and carbon dioxide have much different global warming potentials over time.

A NERA’s revision sans the seemingly arbitrary (and high) 40 percent figure — demonstrated in the following table from the report – show much lower SC-CH4 in each scenario presented in Marten et al. 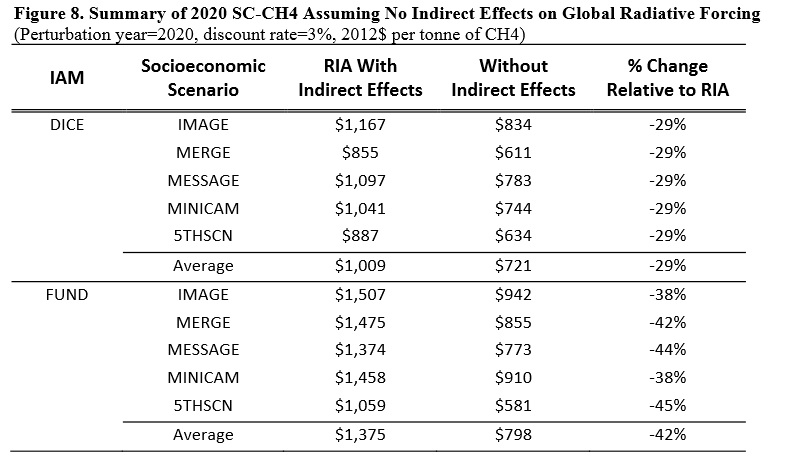 Of the five scenarios the EPA used to project its SC-CH4 Regulatory Impact Analysis, four were “business as usual” scenarios that essentially forecast no mandated methane emissions reductions in the future.

NERA points out that this is a completely unrealistic approach, especially considering the Interagency Working Group (IWG) that justified use of global benefits believes that actions such as the EPA’s proposed methane rule will lead to reciprocal global action to reduce GHG emissions moving forward. From the report:

“The only appropriate assumption for assigning a price on GHG emissions in the near term is that such pricing will continue to be in place (and gradually increased) into the future.  It is illogical, and indeed socially irrational, to choose to price emissions (i.e., to justify reducing them) in the current period based on an assumption that after the current period they will never again be priced (or reduced).  However, that is exactly what is being done when exogenously-fixed BaU emissions projections are used to assess the benefit of one ton less of emissions in a year such as 2020 or 2025.”

For this reasons, NERA believes the fifth scenario used by the EPA — which correctly predicts lower emissions moving forward, is the only one that is even remotely accurate. The EPA’s fifth scenario, listed in the table from the report below, shows much lower social costs of methane than the other “business as usual” scenarios used by the EPA: 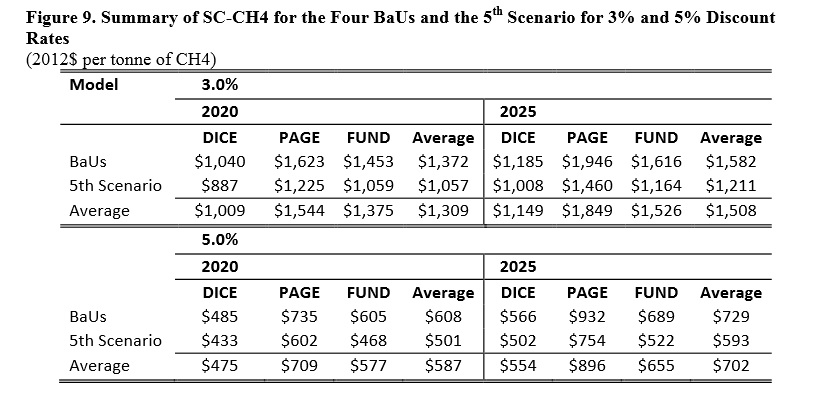 Given all these factors, NERA concludes that EPA’s analysis should have been subject to extensive scientific peer review in order to scrutinize the questionable methods and data above. The EPA did conduct an internal peer review, but even then, there was not a clear consensus, as a handful of reviewers brought forth many of the concerns addressed by NERA’s report. From the report:

“An independent scientific peer review would have likely identified many of the same technical issues we have discussed.  Indeed, some of the issues were identified in EPA’s internal peer review process, but appear to have been glossed over.”

NERA also notes that EPA went out of its way to make sure the three IAM models used were harmonized, even though the models weren’t designed to produce uniform results. The DICE and PAGE IAM models were also simplified and modified from their original, peer-reviewed format, rendering their prior scientific legitimacy moot.

Figure D in the table below — in which NERA re-calculated the EPA’s SC-CH4 with the five corrections highlighted above while using the same IAMs used in Marten et al. – demonstrates just how far off EPA’s social cost of methane figures likely are: 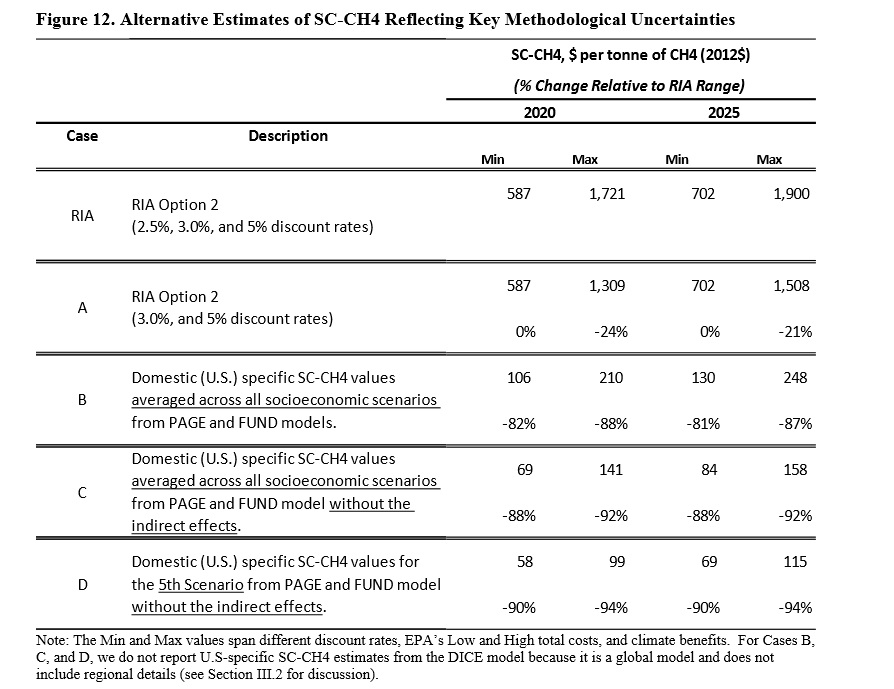 All told, it appears that the due diligence needed was neglected in exchange for political expediency. From the report:

“… there is evidence of a general impatience on the part of the Administration towards the review process, with the IWG deciding to press ahead in using its SCC estimates because Academies’ review will take some time, during which Federal agencies will have continued need for estimates of the SCC to use in benefit-cost analysis.”

“Deferring the scientific review of the SCC and the SC-CH4 to the future, even after recognizing the need for it, sets a dangerous precedent that undercuts the expectation that Federal regulations be based on best available science.”

Perhaps most importantly NERA’s analysis is even more telling considering that methane emissions from the oil and gas sector are plummeting at the same time drilling activity is skyrocketing.  As Energy In Depth’s infographic below shows, EPA is actually claiming that oil and gas methane emissions will go up 25 percent even though they have dropped 11 percent over the past few years. 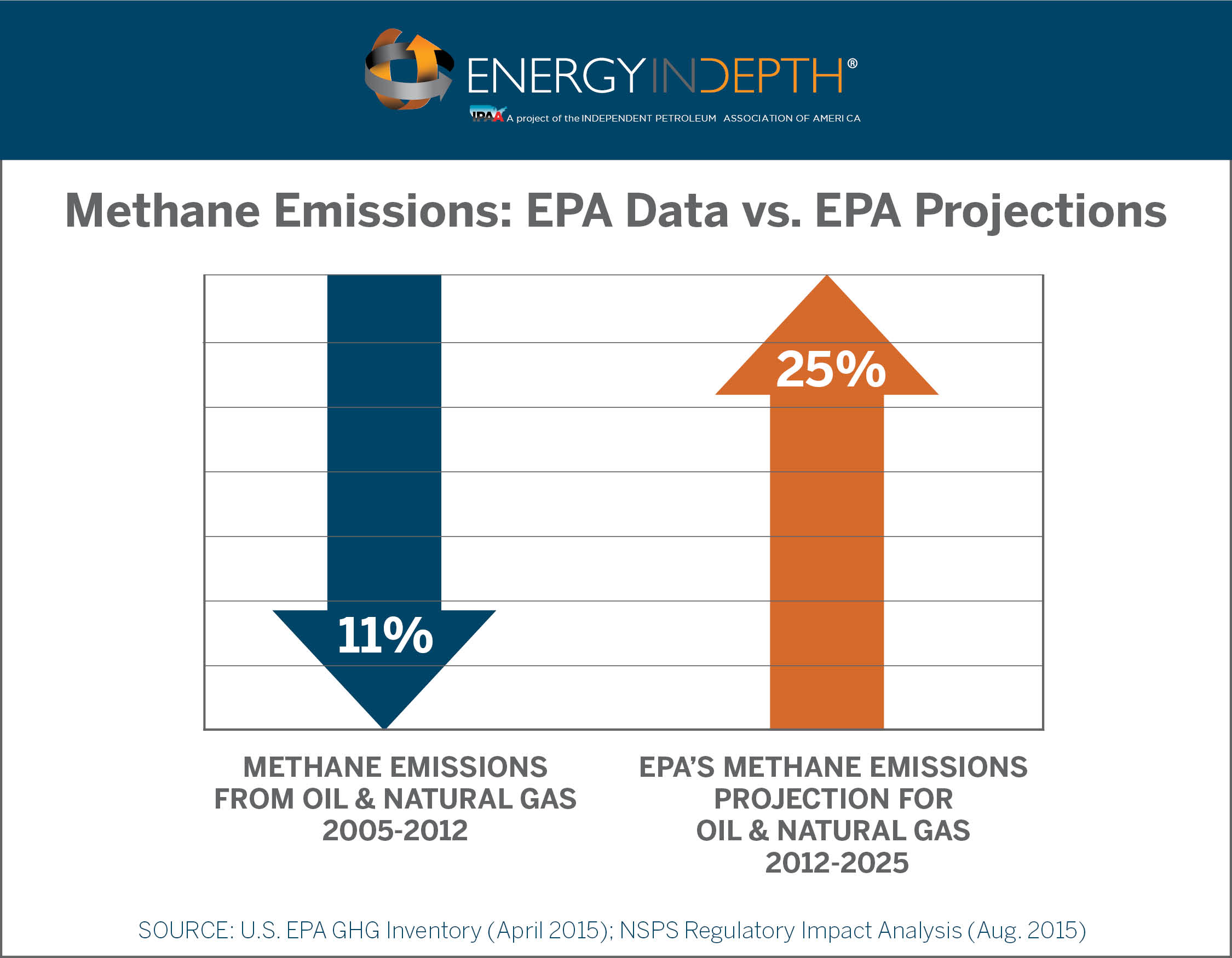 Voluntary efforts by industry to reduce methane emissions – coupled with advances in horizontal drilling and hydraulic fracturing technology – have led to an ideal situation in which emissions are plummeting at the same time as domestic oil and gas production has provided a much-needed economic boost.

The fact that EPA’s new methane rule will be far more costly than the agency is letting on is the latest example of why the rule is a solution in search of a problem.