The amount of recoverable natural gas in the United States has reached its highest-ever recorded level, according to an announcement today by the Potential Gas Committee and the American Gas Association. The PGC’s biennial assessment of recoverable natural gas measured a resource base of 3,374 trillion cubic feet (Tcf), which is a 20 percent or 557 Tcf increase over the 2016 assessment and the largest two-year increase in the report’s history. 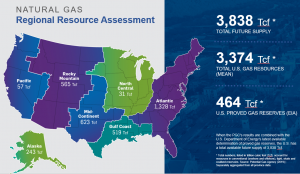 Technological innovation is bolstering the recoverable amount of natural gas as it helps the industry extract and produce more resources, more efficiently and cleaner than ever. As AGA President Karen Harbert explained:

“The United States continues to set new natural gas supply records because of technological improvements and continued learning in gas exploration and production. That same spirit of innovation drives the entire natural gas industry from the companies that transport and deliver natural gas, to the entrepreneurs that develop new technologies that are making natural gas cleaner and more accessible.”

In fact, according the Energy Information Administration, the United States established a new production record in 2018, increasing natural gas production by 12 percent to 28.5 billion cubic feet per day, reaching a new record high for the second straight year. 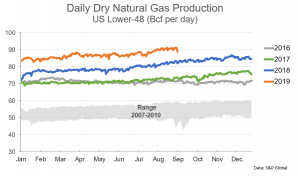 Natural Gas is a Leader in Emissions Reductions

Increased production and use of natural gas is generating both economic benefits for the United States and clean-air benefits for the world. The Environmental Defense Fund released a new report acknowledging that switching to natural gas in power generation resulted in 60 percent of the U.S. power sector’s CO2 emissions reductions from 2005 to 2015. Natural gas has cut 50 percent more emissions in the United States than wind and solar combined since 2005.

Natural gas will continue to provide these environmental benefits. The PGC report found that the United States also has a record 3,838 tcf in future natural gas supplies, confirming the resource’s continuing potential in the nation’s energy mix. Harbert explained the implications of this abundance for Americans:

“This report verifies that our nation has more natural gas than at any point in our history, ensuring that American families and businesses can rely on this clean, affordable source of energy for many generations.”

2020 Candidates Continue to Ignore the Benefits of Natural Gas

Meanwhile, some Democratic presidential candidates are pondering restricting natural gas production through fracking bans – a move experts believe would be detrimental to the U.S. economy, energy security, and environmental goals. International Energy Agency Executive Director Fatih Birol recently explained the implications of a fracking ban in an interview with CNBC:

“Natural gas has transformed the American economy and energy future for the better. Any realistic plan to continue towards a cleaner energy future will have natural gas as a foundation.”