In a new report, researchers from environmental think tank Resources for the Future (RFF) found that despite the recent downturn in commodity prices, about 82 percent of local governments across five U.S. shale regions still positively benefited from oil and gas activities. Notably, researchers found that the “net fiscal benefits” for many of these local governments has even improved in 2016 and 2017 compared to 2013 through 2015.

It should come as no surprise that oil and natural gas development is a major economic driver, especially for local communities. In addition to creating production jobs and boosting investment spending, shale development has also been found to increase wages and decrease a region’s overall unemployment. As the report’s authors note, a 2017 study found that “communities within 100 miles of shale development experience more than $500,000 in increased wages, royalties, and business income for every $1 million invested in shale development.”

To assess the fiscal impact of of oil and gas development on localities following the decline in oil prices, the authors built upon interviews with “hundreds” of local officials taken from 2013 to 2015 across 16 states. The authors then revisited five of America’s top producing shale regions covered in those initial interviews: the Bakken Shale in North Dakota, the Denver-Julesburg Basin in Colorado’s Front Range, the Marcellus Shale in southwest Pennsylvania, and Texas’ Eagle Ford and Permian shales.

In total, the authors examined a total of 29 local governments – 19 that were previously examined, with 10 new additions – compiling data on a number of fiscal impacts such as tax revenue generated by shale development and in-kind contributions from producers.

In comparing these fiscal impact data, along with the sentiments shared by local officials, the study finds that not only are these regions still benefiting from development following the decline in price, they are doing even better than when prices were over $100 per barrel. According to the study, the number of communities reporting negative fiscal impacts from development was cut in half, while those reporting net positive fiscal benefits jumped significantly: 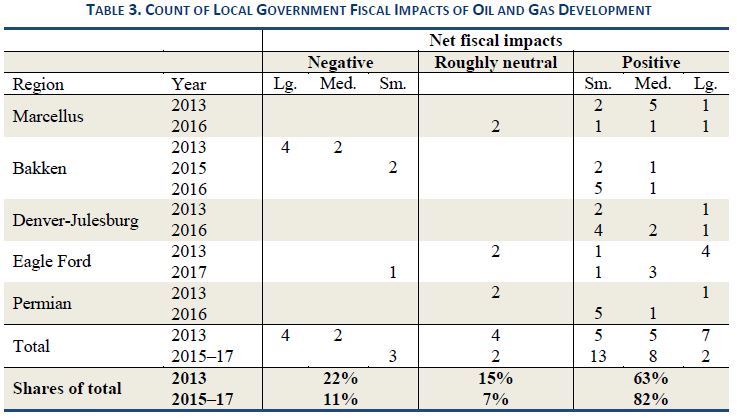 “These increased revenues have enabled the county to invest in a number of capital upgrades and other projects, including $15 million in its Bright Futures program, which provides a $3,000 grant to all graduating high school students, GED recipients, and veterans for use in higher education. Local officials report that this program would not have been possible without revenues from oil and gas production.” (emphasis added) 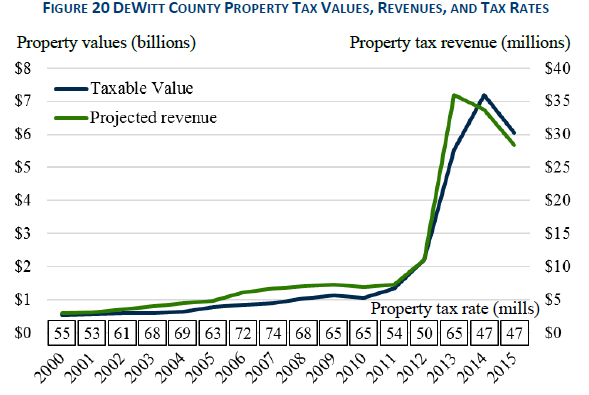 Along with property tax revenue, royalties and impact fees have generated considerable revenue. For instance, impact fees totaling $1.2 billion have greatly benefited Pennsylvania communities, as a majority of the fee goes right to local governments. According to the report:

“… Pennsylvania allocates a large proportion of that revenue directly to local governments. For many townships, allocations of Impact Fee funds have dramatically increased annual revenues.”

“This combination of new revenues and limited costs has resulted in net positive fiscal impacts for most local governments in Pennsylvania. While the state continues to debate whether revenue policies should be adjusted, the Impact Fee appears to be adequately supporting local governments.”

In addition to revenue from taxes and impact fees, in-kind contributions from producers aid in mitigating potential negative fiscal impacts. Specifically, many operators provide contributions for road maintenance or repair, lessening the burden for local governments. For example, as the authors learned from interviews with officials in the Eagle Ford:

“In-kind donations have also been helpful, primarily through donations of road materials such as aggregate from operators. Local officials worked closely with a group of companies to assist on road repairs associated with one large project and have generally been happy with that collaboration.”

Moreover, these in-kind contributions not only lessen the financial burden facing local governments but also further improve local communities. As the report notes, operators in Weld County, Colo., voluntarily moved “pipeline and other infrastructure at their own expense” to make way for a $160 million expansion to Highway 49, while operators in Pennsylvania spent $1 million on a walking trail to allow for a right-of-way for a new natural gas pipeline.

Commodity price fluctuations are an unavoidable reality in the oil and natural gas business, and while the fiscal benefits of development are undeniable during the “good times,” this report shows that even when faced with challenges, oil and gas development still continues to be a vital economic driver in local communities.