When it comes to shale development and manufacturing, Republicans and Democrats continue to see eye-to-eye and are rooting for a manufacturing rebirth — particularly in Ohio, West Virginia, Pennsylvania and Kentucky. And according to a new report by the American Chemistry Council (ACC), these four states could see 100,000 permanent jobs from shale-powered manufacturing in the near future. At the center of the multi-billion dollar investment detailed in the ACC report is a natural gas liquids (NGLs) and chemicals storage hub that U.S. Senator Joe Manchin (D-W.Va.) has described  as a “field of dreams,”

“This is a game-changer for us. It’s a real field of dreams — build it and they shall come.”

The ACC report finds the quad-state region could see a $35.8 billion dollar boost in investment dollars by 2025, which would support 25,700 new chemical and plastic manufacturing jobs, 43,000 supplier industry jobs and 32,000 “payroll-induced” jobs in communities where workers spend their wages. Federal, state and local taxes could yield a whopping $2.9 billion in new revenue as well, according to the report. ACC President and CEO Cal Dooley recently stated how natural gas and ethane from natural gas fuels chemical and plastic manufacturing jobs, explaining it this way, 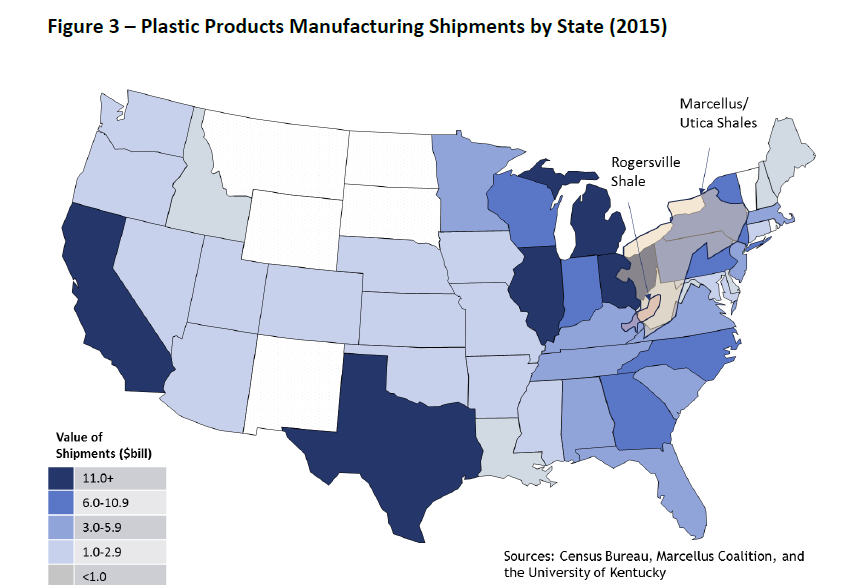 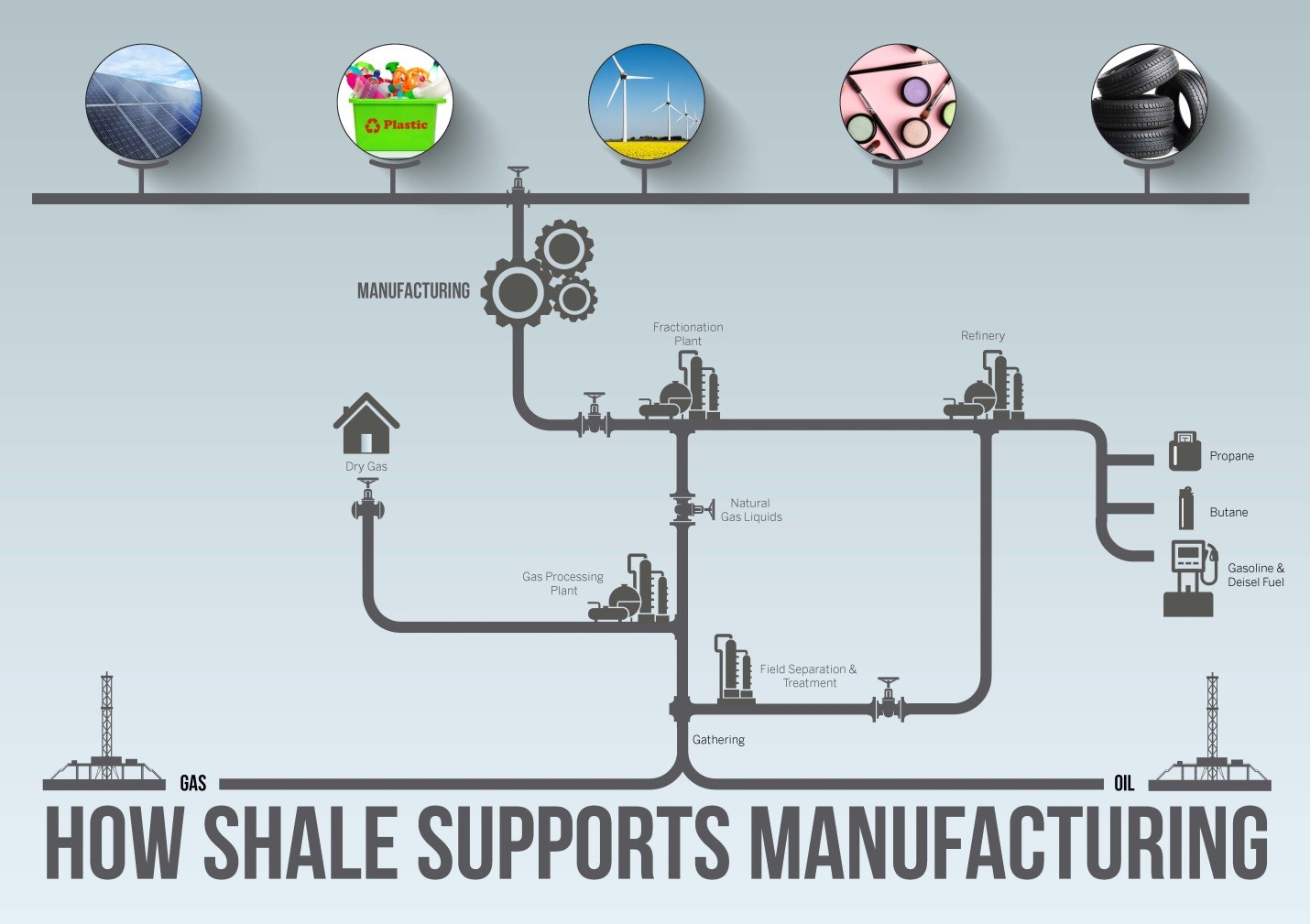 The mere possibility of such economic growth has been made possible by fracking, which has unlocked the Marcellus, Utica and Rogersville shale deposits. These shale deposits have led to vast resources of natural gas liquids (NGLs), which provide the feedstock to the petrochemical industry and manufacturing of plastics. However, there is currently a serious shortage of infrastructure needed to fully capitalize on NGLs in the Appalachian region.

Fortunately, this is an issue members of both Houses in Congress are hoping to change in an effort to unlock the full potential of the Marcellus, Utica and Rogersville shale deposits. As U.S. Senator Shelly Moor Capito (R-WV) has said,

“Energy and manufacturing are critical to growth in our state. With the Marcellus, Utica and Rogersville shale deposits, we have plenty of resources, and we want to keep the value of those resources in our region.”

Ohio Sen. Rob Portman (R-OH) and Rep. Bill Johnson (R-OH) have teamed up with the West Virginia delegation, including Congressmen David McKinley (R-WV) and Evan Jenkins (R-WV), and Senators Joe Manchin (D-WV) and Shelley Moore Capito (R-WV), to form a bipartisan regional effort to bring national awareness to the importance of creating an NGL “hub” and what it would mean for a region of the country that’s been plagued with watching their manufacturing jobs get shipped overseas. Moore Capito introduced the “Appalachian Ethane Storage Hub Study Act” in the Senate recently, a bill co-sponsored by Manchin and Portman that would charge the Energy and Commerce departments with determining the feasibility of building a storage and distribution facility. Rep. McKinley and others announced a House companion bill on Friday. Manchin, Moore Capito, McKinley and Cohn all recently wrote National Economic Council (NEC) Director Gary Cohn to express their support of the hub.

Dooley perhaps summed it up best when he said,

“This is a once in a lifetime opportunity to further expand our base by capitalizing on gas formations. We’ve got a competitive advantage globally, and the nice thing about the Appalachia region is that it’s close to the manufacturing center of the U.S., including the auto sector and the upper Midwest.”

In addition to this bipartisan regional effort to bring a “world-class natural gas liquid (NGL) storage and distribution hub (“Hub”) in the Appalachian region,” construction of ethane processing plants — which convert ethane into ethylene, a feedstock source to the petrochemical industry — and further pipeline development will be critical.

Recently litigation and activism aimed at shutting down pipelines has become more prevalent from the “Keep It In the Ground” fringe environmental extremists. If successful, their obstruction would put the equivalent of a monkey wrench into the wheels of progress underway to bring manufacturing jobs back to the region.

The most recent installment of the U.S. Chamber of Commerce’s Institute Energy Accountability series asked the question “What if pipelines aren’t built into the Northeast?” and finds such a decision would be devastating to residents in the six New England States: Pennsylvania, New York, New Jersey, Ohio and West Virginia. In addition to higher electricity and heating costs, it would mean nearly 78,400 jobs lost by 2020, more than $4.4 billion in labor income off the table, and the loss of a whopping nearly $7.6 billion in GDP.

The recipe to support shale-fueled manufacturing and permanent job creation includes pipelines, storage and distribution of NGLs and processing plants of natural gas components, such as ethane crackers.  As the ACC report underscores and Dooley rightly stated,

“In the last 10 years, [the United States] has gone from high-cost to being among the lowest-cost producers of chemicals in the world, because of natural gas and hydraulic fracturing. We’ve got 300 new chemical facilities on the board [in the U.S.] with half of them started or completed. This is a once in a lifetime opportunity to further expand our base by capitalizing on gas formations. We’ve got a competitive advantage globally, and the nice thing about the Appalachia region is that it’s close to the manufacturing center of the U.S. (Emphasis added)