Flaring intensity in Texas is well below the historic highs of the 1950s and much lower than other nations around the world, according to a new Texas Railroad Commission report.  As Commissioner Ryan Sitton, author of the report, explained:

Flaring intensity is the “relationship between oil production and flaring” (gas flared per unit of oil production), and as RRC explained:

“By measuring the flaring intensity of nations, states, and various companies, and comparing them all to the global industry average, we now have an effective benchmark to compare performance.”

RRC’s data – which will be updated quarterly – provide some much-needed perspective on a misleading “Keep It In the Ground” narrative that has been perpetuated by some media.

Here are some of the top findings in the report:

Texas Flaring Intensity Much Lower Than Most Other Nations

RRC’s data found that Texas flaring intensity was 0.09 while the rest of the world is 0.14 including other major-producing nations like Russia (0.18) and Iran and Iraq (each at 0.37). The United States also fell below the world average with an intensity of 0.11. 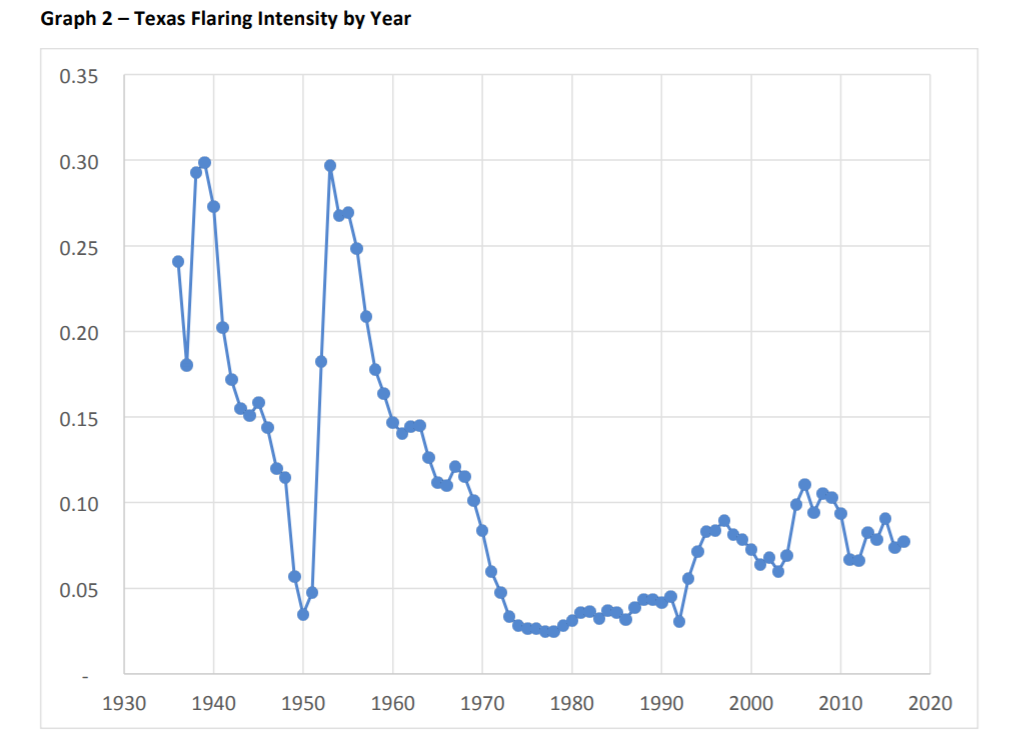 Flaring is often needed because there is an excess of produced natural gas and not enough pipeline capacity to carry the fuel to market. But with the construction of the Permian Highway pipeline – a project that has been targeted by activists – and other infrastructure projects due to be completed soon, flaring in Texas is expected to fall even further over the next two years:

“Current projections are that approximately 200,000 Mcf/d of current flaring will be reduced over the next 12 to 18 months as these systems are completed. Additional new wells will add new flares, but new development is not expected to outstrip new infrastructure, so the total flaring levels should be dropping, and flaring intensity should be reduced at the same time.”

“By looking at the rate of new flaring, the development of new wells, and the future completion of infrastructure, our projections are that flaring will drop by 50,000 to 150,000 Mcf/d over the next 18 months as new infrastructure is completed.” (emphasis added)

The Importance of Flaring

Flaring is an important and necessary practice that ensures safety and helps mitigate environmental impacts.

The need for flaring often arises when there is an excess of produced gas but there is not enough pipeline capacity to bring the fuel to market.

The practice involves burning excess gases that cannot be economically recovered to help avoid buildups that could lead to explosions that would endanger workers and surrounding communities. Flaring is also a cleaner alternative to venting, which is the direct release of gas into the atmosphere and leads to higher methane emissions.

Thanks to consistent innovation from energy producers, the United States has one of the lowest flaring intensity levels in the world all while oil and natural gas production has reached record highs. Major energy companies have committed to reducing flaring as the oil and natural gas industry continues to become cleaner and Commissioner Sitton applauded those efforts in his report:

“It is also noteworthy that many Texas operators have taken voluntary steps to reduce their flaring volumes and they should be commended for that action.”

Check out Energy In Depth’s fact sheet to learn more about flaring. 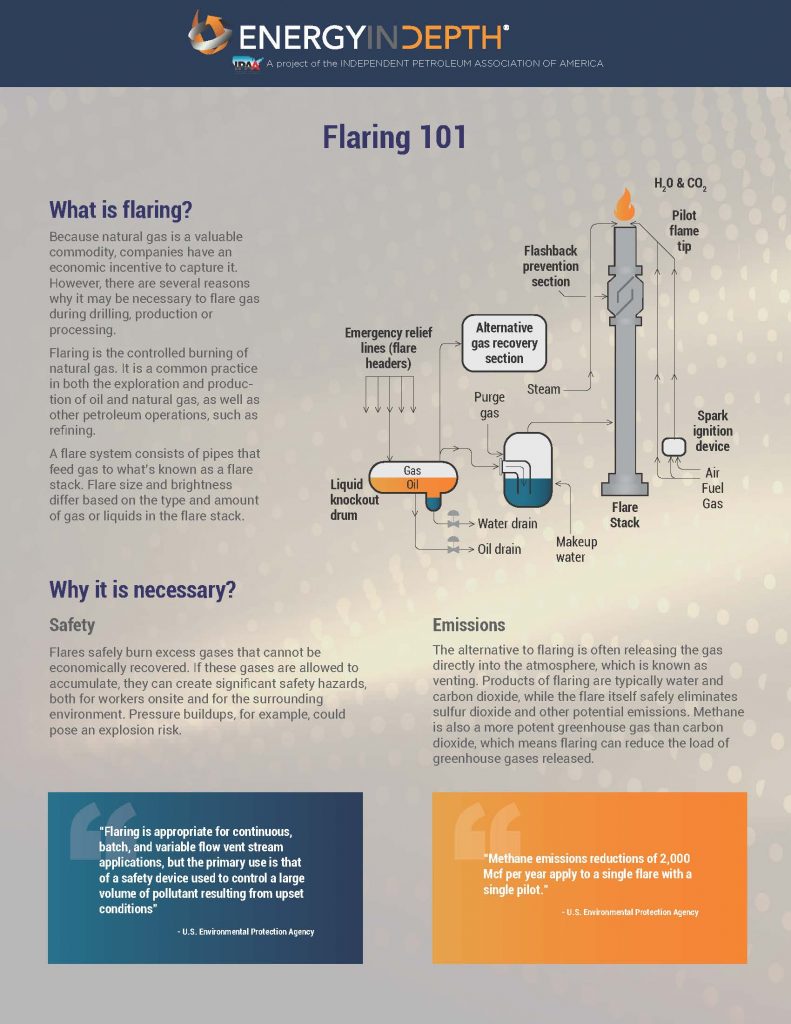 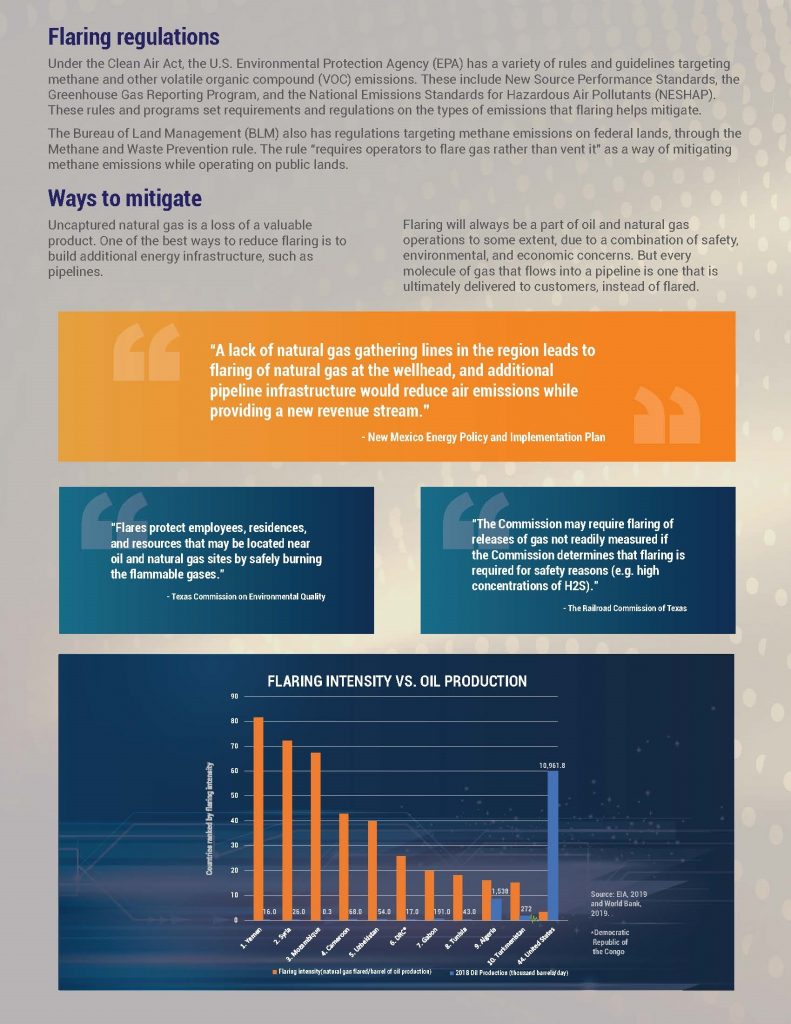 Ironically, the activists who are often the loudest critics of flaring are the same ones who are working to prevent solutions to the problem by blocking the construction of new pipelines. As the report explains, simply reducing Texas oil production will do little to reduce global flaring intensity, especially compared to the projected reductions that will occur with new infrastructure:

“With flaring intensity levels in Texas already lower than most parts of the world, and lower than historical levels, a forced reduction could cause a disproportionate increase in flaring in other parts of the world and have a chilling effect on Texas energy development with no quantifiable benefit to Texans or the world. This would negatively impact jobs and the economy not just in Texas, but nationwide.”

The reality is that Texas is one of the largest producers of oil in the world – and it’s experiencing record-breaking production with one of the smallest environmental footprints globally, which is a testament to the industry’s commitment to reducing emissions through innovation.