The Fraser Institute recently released its annual Global Petroleum Survey ranking the appeal for investment in 97 oil and gas jurisdictions around the world. This year’s survey results found six of the top 10 most attractive regions in the world for oil and gas development are located in the United States: Texas (1st), Oklahoma (2nd), North Dakota (3rd), West Virginia (5th), Kansas (6th) and Wyoming (9th).

As the report explains,

“This year the United States experienced a two-point decline in its weighted score. Despite this, the United States remains the region with the most attractive policy environment for investment in upstream oil and gas.” (emphasis added)

Three hundred thirty-three oil and gas executives and managers responded to this year’s survey, which evaluates jurisdictions based on investment factors such as fiscal terms, taxation, environmental regulations, regulatory costs, consistency and enforcement, political stability, quality of infrastructure and geology, and availability of a skilled workforce. These responses enabled the Fraser Institute to rank 97 jurisdictions that collectively represent 52 percent of proved oil and gas reserves worldwide and 66 percent of global oil and gas production. The rankings do not take into account the amount of proved reserves in a jurisdiction.

“Texas and Oklahoma have, for years, been seen as the most attractive jurisdictions in the world for oil and gas investors — proof that sound regulatory policies and stable environmental protections help attract scarce investment dollars even when commodity prices are down.”

In fact, according to the report, in the last six surveys, Texas, Oklahoma and North Dakota, as well as Saskatchewan in Canada, are the only four jurisdictions in the world to consistently rank in the top 10.

And while Texas, Oklahoma and North Dakota dominated the lists with “Policy Perception Indexes” (PPI) of 100 percent, 94.14 percent and 91.54 percent, respectively – it is West Virginia that had one of the most notable improvements in the rankings with a PPI of 90.81. According to the survey,

All told, the United States ranks high overall with 16 of the 21 U.S. jurisdictions included in the survey ranking in the top 50 percent globally. And all but three jurisdictions fell into the top two investment quintiles with PPI scores of 60 or better, as the following graphs show. 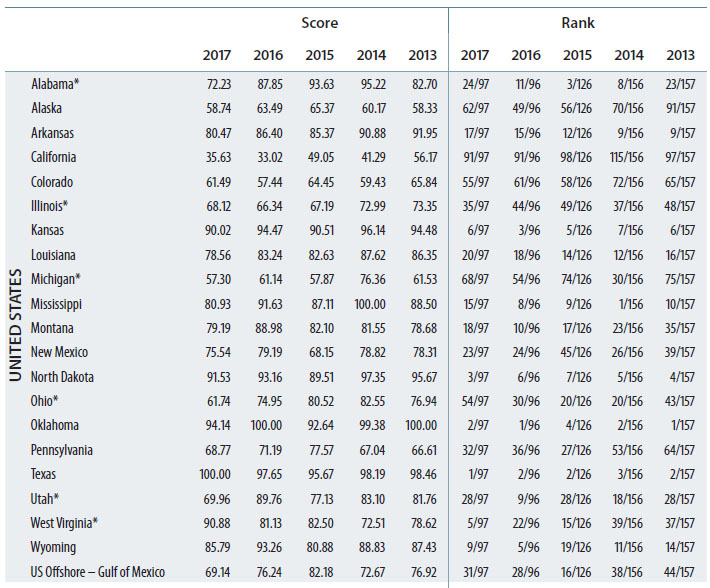 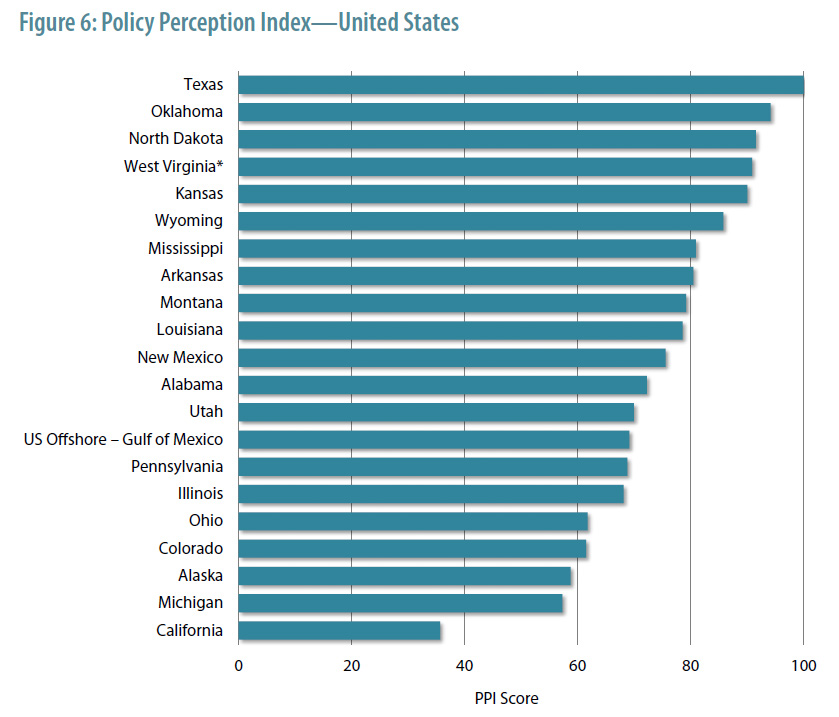 Notably, the report included a few comments for specific jurisdictions that provide insight into rankings for a few states. For instance, survey respondents noted that in North Dakota, successful collaboration between industry and government to improve the environment has in turned improved the investment attractiveness for the state:

“The North Dakota Department of Health is working collaboratively with industry to get this jurisdiction to meet air quality standards. This department is much more cooperative than the EPA.”

And in Oklahoma, collaborative efforts were also seen as advantageous for investors:

“The Oklahoma Corporation Commission encourages operators to work together in unconventional development and this encourages investment.”

For those states such as California that were viewed as less attractive for investment, investment concerns stem from regulations, taxation, and fiscal terms. In the case of Colorado, which was in the second quintile but still ranked low amongst other U.S. jurisdictions, responders noted that the unsuccessful attempts by activists to ban oil and gas development has created uncertainty for investors:

“Environmentalists’ lawsuits to block oil drilling in Colorado are creating roadblocks for the oil and gas industry. Initiatives to ban hydraulic fracturing and excessive regulations for drilling create limitations and ultimately deter investment.”

This survey further demonstrates that the United States is well on its way to becoming the “undisputed leader” in global oil and gas markets, as the International Energy Agency recently reported. Thanks to shale, the U.S. is dominating oil and gas production, positioning itself to become the leading exporter of oil and gas, and experiencing increased investments in end use markets like power generation and manufacturing.