The two-year, 187-page study conducted by the Ohio Division of Geological Survey, a consortium of universities, producers, the US Department of Energy and others also reveals 1.96 billion barrels of recoverable oil trapped in the region’s shale rock, up more than 100 percent from previous USGS estimates of 940 million.

Ohio and the Utica Shale have now arrived among the top of the list of oil and gas plays, as explained by the study’s director Doug Patchen.

“The revised resource numbers are impressive…It’s comparable to the highest number I’ve seen for the Marcellus,” says Patchen, where estimates range from 500 to 800 trillion Tcf of natural gas.

The below charts illustrate just how much estimates have increased: 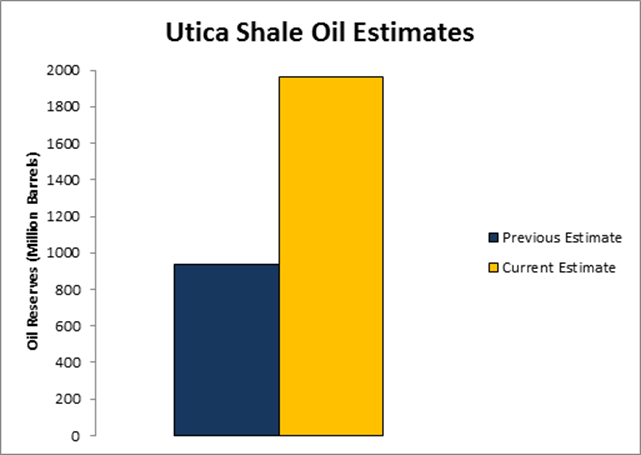 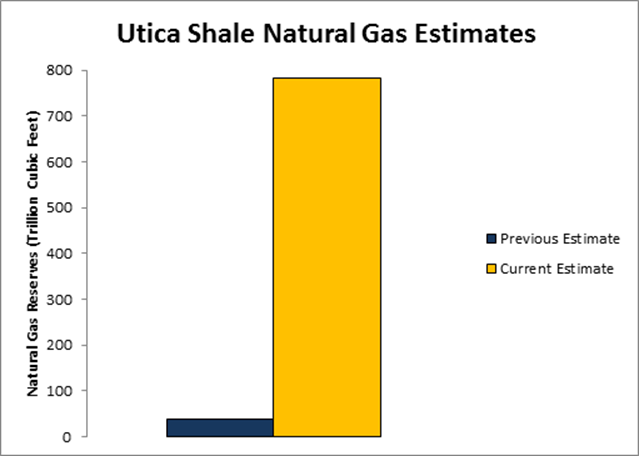 Corky Demarco, head of the West Virginia Oil and Natural Gas Association, touted the findings, predicting that exploration from the new discovery will further propel the regional economy and help the Utica Shale area compete globally:

In addition, the study predicts that many newly-found drilling locations will produce hydrocarbons more efficiently than in some previous areas, writing that,

“As the play develops, one can expect an increase in productivity as the best areas are discovered” (p. 165).

It also indicates that the vast Point Pleasant Formation of Ohio has exceptionally high recoverability potential compared to other areas of the Shale, due to its unique chemical composition:

This presents even more historical opportunities for the state of Ohio, where the industry and related companies employ over 190,000 people and have invested over $22 billion since the beginning of the shale revolution.  Continuing to develop these vast resources will be also a boon to Ohio manufacturing as more cracker plants and other manufacturing projects come online.

These newly-discovered reserves place Ohio confidently on the cusp of Marcellus-level expansion, and could bring massive amounts of new investment to the state – a state that continues to find safe, innovative ways to develop the oil and clean-burning natural gas responsible for American economic growth and energy security.