New Study Shows Business is Booming for Skilled Trades, Thanks to Pipelines

The Oil and Gas Industry Labor-Management Committee, led by the American Petroleum Institute (API) and North America’s Building Trades Unions, released a report this week showing the tremendous amount of work the pipeline industry provided to skilled trades unions from 2006 to 2015. Now that the Federal Energy Regulatory Commission (FERC) officially has a quorum to approve $13 billion worth of projects – equating to 23,000 construction jobs – that have been in limbo while FERC awaited confirmation of new commissioners, this trend of growth and opportunity for local unions should continue in 2017 and 2018. As Jack Gerard, API president and CEO, said in a statement,

“As the new study confirms, building new pipelines will create thousands of jobs for America’s skilled craft professionals across all 50 states. These are good-paying, middle class-sustaining jobs that do not rely on taxpayer dollars.

“By delivering affordable, reliable energy to homes and businesses, energy infrastructure will continue to generate economic benefits for decades – making it an especially valuable long-term investment.”

Further, annual investments in new pipelines or additions and reconstructing of existing pipelines ranged from $6 billion to $28 billion.  Total construction costs alone reached a milestone $14 billion in 2016. And all of this investment creates more employment opportunities. 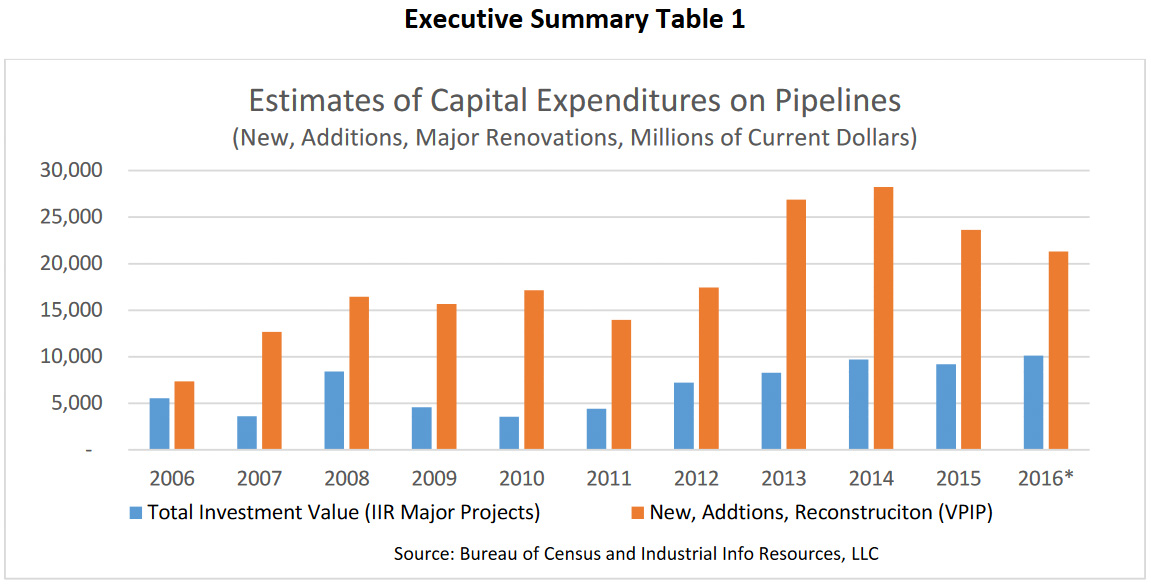 “Industrial Info Research, LLC estimates the investment value of major pipelines constructed during 2008-2015 averaged $8.8 billion dollars per year, or $79.0 billion for the entire period. Activity was heavily weighted toward southwestern states (Oklahoma, Texas); together they  comprised 39% of the overall total for the 29 states included in the sample. The Great Lakes (Illinois, Indiana, Michigan, Ohio, Wisconsin) account for 19% of activity, the Northeast (New York, New Jersey, Pennsylvania) follow with 15%, while the Midwest (Iowa, Minnesota, North Dakota, South Dakota) comprised 9% of the 7,547 plumbers, 5,408 operators, 24,765 laborers, and 4,006 teamsters for a U.S. total of twenty-nine state total.”

A U.S. Chamber report from earlier this year also found that if pipelines are not built in the Northeastern states of Pennsylvania, New York, New Jersey, Ohio and West Virginia, it would mean nearly 78,400 jobs lost by 2020, more than $4.4 billion in labor income off the table and the loss of a whopping nearly $7.6 billion in GDP, in addition to higher electricity and heating costs.

In Ohio alone, the Ohio Laborers District Council (OLDC) recently reported that it had 4.2 million work hours over a 16-month period from January 2016 to April 2017, surpassing 2016 expectations by more than a million work hours. Achieving that level of work wouldn’t have been possible without pipeline infrastructure projects.

In fact, research from Energy In Depth earlier this month, showed that five Ohio pipeline projects – totaling 1,241 miles – will create over 26,000 jobs, generate over $1.2 billion in local tax revenues during the first five years the lines are in operation, and move 7.65 billion cubic feet (Bcf) of natural gas daily. 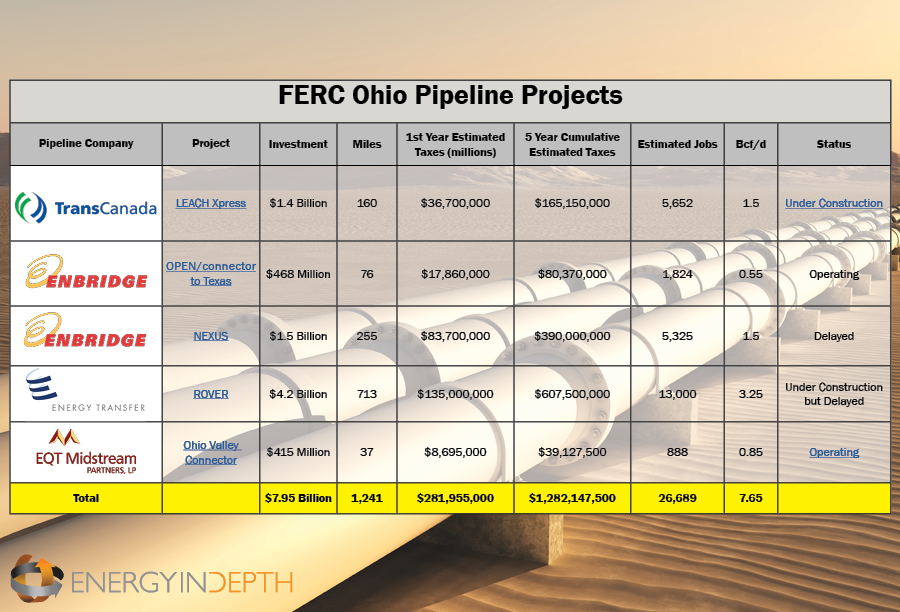 As this latest API report and accounts from local unions have shown, the oil and gas industry is creating jobs – and they aren’t just on the well pad. Construction of pipelines, natural gas-fired power plants, petrochemical facilities and other midstream and downstream investments are creating opportunities for employment and economic development.