This past Friday the little town of Franklin Forks, Pa., was once again in the media spotlight. A handful of activists, mostly from New York and led by Vera Scroggins, caused a scene that actually prevented a family from receiving a water delivery from WPX Energy. More residents of the community turned out as well, and were met with rude comments and uninformed statements from a group convinced they know more about the community than its own residents.

Over the last 16 months WPX Energy has been delivering water to three homes in Franklin Forks while the Department of Environmental Protection completed a study to identify whether methane in the water came from natural gas development.

The Department of Environmental Protection completed its study and released a statement saying the methane in the Franklin Forks water wells is not from the natural gas industry, but is rather naturally occurring. The DEP said (as pointed out in this post and this post):

This past week WPX Energy had all intentions of removing a water buffalo from a house to which they had been supplying water for 16 months.  The family has their own water buffalo, although it is smaller than the WPX one, and WPX Energy offered to try to bring their water well back online.  According to a spokesperson with WPX Energy:

“The family needs a permanent water supply and so we offered to help bring their well back on line, working with the PSU Extension Center water quality expert and other experts, at no cost to the residents.  The residents declined and instead decided to install their own exterior water tank and associated equipment.”

When WPX Energy went to remove the water buffalo, as previously agreed upon, they were met with opposition on the landowners’ property.  The infamous Vera Scroggins convinced a handful of activists to show up and protest. Most of them, it should be noted, were not even from Franklin Forks, but had traveled in from New York.

This really frustrated the people living in Franklin Forks who know the truth about the water quality in their community.  Franklin Forks has had substantial amounts of methane in its water for a long time, and well before natural gas development.  Residents of Franklin Forks say they have always known there was methane in their water. Salt Spring State Park has bubbled as long as the locals can remember, too.  Some folks from New York refuse to accept it and blame the natural gas industry, apparently content to believe that the industry owns a time machine.

About 10-15 people showed up in support of natural gas development. They wanted to get their message across, which was clear: they live in Franklin Forks, have lived there for generations, and their water has not been impacted by natural gas development.  They were furious that “professional protestors” scurried in from New York to try to smear their community once again.

The out of state protestors called community members of Franklin Forks uninformed. Scroggins acted very much in character, yelling at people and name calling.  We obviously expected it after we saw her episode on a tour in this post (keep in mind, 11/1/13 she was screaming at others for “trespassing” even though they weren’t) and in this post when she was talking to Phelim McAleer.

In the video below, one person against natural gas yelled at people in support of the industry saying they are just believing “all of the crap that the gas company put out.”  He refuses to believe the industry, but he also is blatantly refusing to listen to state regulators.  Residents asked him where all the “devastation” was in Pennsylvania if natural gas is really damaging.  He avoided the question, of course.

Before the last video ends you can clearly hear and see Scroggins yell at people for “trespassing.”  No one was trespassing.

Scroggins asked everyone there in support of natural gas why they were there.  I spoke with a few people who support natural gas, just to make sure their voices were heard.  Scroggins was clearly very angry, and she rudely interrupted the people speaking. One of the other women had to literally pull her away.

In the video below, Scroggins points at every person who is arguing against her and screams about them.  Ironically enough, after saying the word “uniformed” no fewer than six times, she didn’t even know the family has its own water buffalo, which was given to them.   Scroggins also refused to believe anything else could possibly impact the water other than natural gas development.

In the video below you hear Bill Huston and Scroggins saying WPX Energy had no right to be at the home, not withstanding the fact that WPX and the landowner’s attorney clearly established that they did:

Bill Huston tried to intimidate everyone and stick up for Scroggins.  He screamed at everyone who has a differing opinion, which is pretty much what you expect from the anti-fracking crowd: volume over substance.  Scroggins had been name calling all day, and then got upset when someone challenged her (also unsurprising). The tantrum was really quite the spectacle, though she should know that getting in someone’s face and pointing a finger at them is not the way to change hearts and minds.

One man insisted the natural gas industry caused problems with the water well in this home.  The Department of Environmental Protection said there was nothing linking natural gas development to the quality of the water well at that house, though.  Is this the evidence we’re supposed to rely upon as an alternative to a scientific investigation? Is this being “informed”? Is this the best the opposition can do?

So who are the uninformed?  Is it the people who live in Franklin Forks and truly know what their water is like? Or is it the professional activists who had nothing better to do on a Friday than go out, protest, and stick fingers in a woman’s face?

Below is a quick refresher about Salt Springs Park and methane: 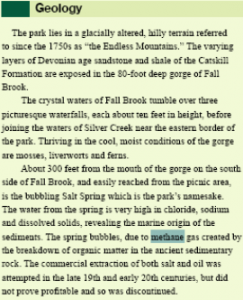 Be sure also to check out the headline below from 1921, also shown in the post here: 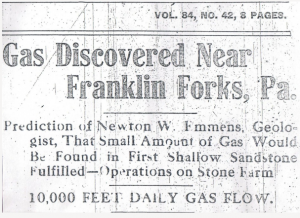 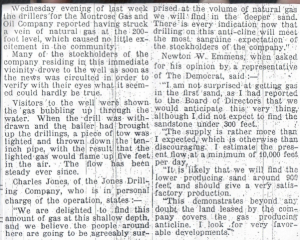 The facts are simple. Methane has been in the water in Franklin Forks since long before the natural gas industry began development. Locals have always known about the natural gas and they will tell you that (even if it means being cursed at by New Yorkers).  The activists from out of state – with little or no knowledge of the area – disagree. They have no evidence to support them, but since they disagree, they want to intimidate locals into denying the facts.

The residents of Franklin Forks are ready to put all of the craziness behind them and find real solutions to the issues some of their neighbors are facing. They have created an educational group to keep informed on the development around them and are fed up with non-residents trying to force their activism on their community. Scroggins often claims she is looking out for the residents of Susquehanna County. Maybe she should start actually listening to them, instead of berating them.