The plan highlights 53 combined heat and power – also known as co-generation – projects across the state. Co-generation is a technology that typically uses natural gas to produce both electricity and heat to achieve greater energy efficiency. According to Gov. Cuomo’s press release:

Despite the hypocrisy of the Cuomo administration, this continued increased use of natural gas is a win for the environment and residents living in the state. The following were listed in the press release as benefits associated with the co-generation projects:

As EID recently highlighted, Americans across the country are already benefitting from huge reductions particulate matter, sulfur dioxide and nitrogen oxide as natural gas use has ramped up. Now, despite its ban on hydraulic fracturing – the process used to develop natural gas reserves – New York plans to take advantage of natural gas being developed in neighboring states to help meet its Clean Power Plan goal.

Governor Cuomo, wouldn’t it have made more sense to develop New York’s natural gas resources and create some economic development for the Southern Tier instead of importing it at a premium from neighboring states?

Just days before New York finalized its ban on shale development the state released its 2015 Energy Plan, which, ironically, calls for the increased use of natural gas over the next few decades.

According to the 2015 Energy Plan, New York already relies heavily on natural gas:

Given that New York refuses to allow shale development within its borders it would be reasonable to assume that the state would look to move away from natural gas – or hydrocarbons altogether. Instead, the state is actually planning to increase its natural gas usage year-over-year, according to the Energy Plan: 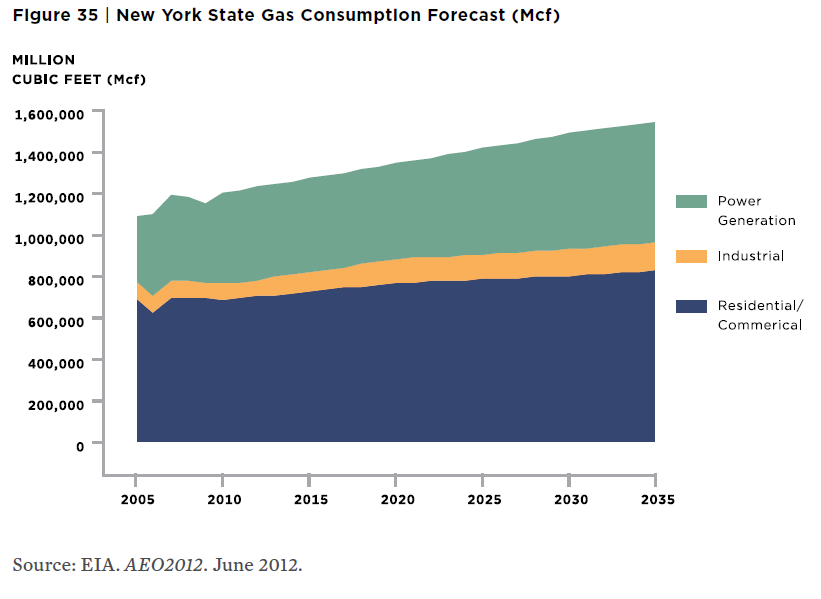 And while New York used to have a rich history in oil and gas development, it appears that legacy will be just that: history. So the question remains, where will New York get the gas its residents demand? According to the State Energy Plan:

New York is one of the largest natural gas consuming states in the nation with approximately 4.7 million natural gas customers, and the state’s wholesale electricity prices have been closely correlated to the commodity cost of natural gas. According to the State Energy Plan:

Lower natural gas commodity prices would also result in CO2 emissions being lower by 2.4 million tons, or about 7 percent and firm (energy plus capacity) power prices being lower by 20 percent. (Emphasis added Pg. 62)

In other words, the increased use of natural gas will, according to New York’s own Energy Plan, bring significant economic and environmental benefits, yet New York is also banning the very technology that makes these benefits possible.

This decision also prevents the creation of the thousands of jobs that would have come from shale development.  As Fox News reported, “Cuomo’s decision risks up to 54,000 fracking-related New York jobs — jobs that don’t exist now since fracking is not allowed, but could have been generated with the approval of various projects in the future.”

States like Pennsylvania have seen a huge economic boost from shale development and after more than a decade of development, recent polls have shown continued support for development. It’s clear that New York’s Governor, Andrew Cuomo got it wrong when he banned hydraulic fracturing in the state – a decision that has been criticized and called “misguided” even by former New York City Mayor Bloomberg. Despite this decision, New York will continue to need a steady supply of natural gas, which states like Pennsylvania are happy to provide.