As Energy In Depth has previously reported, anti-fracking activists, especially in New York, have recently turned their attention to pipelines as a means to halt shale development across the country. This became even more apparent last week when four Schoharie County officials joined anti-fracking activists at the capitol building in Albany to protest a number of pipeline projects and associated infrastructure that would bring domestic natural gas produced in Pennsylvania’s Marcellus Shale to large markets on the East Coast. Their rationale? They claim another one of New York’s infamous health studies is needed to assess potential impacts from natural gas pipelines and infrastructure. In other words, they are once again throwing science and reason out the window.

The greatest irony of this entire argument is that there is clear evidence right in front of these activists’ faces that natural gas has already significantly improved public health in New York. Just take a look at New York City, which has the cleanest air in over 50 years, thanks to an increased use of natural gas from Pennsylvania’s Marcellus Shale. NYC Mayor, Michael Bloomberg, laid this out in a press release, stating: 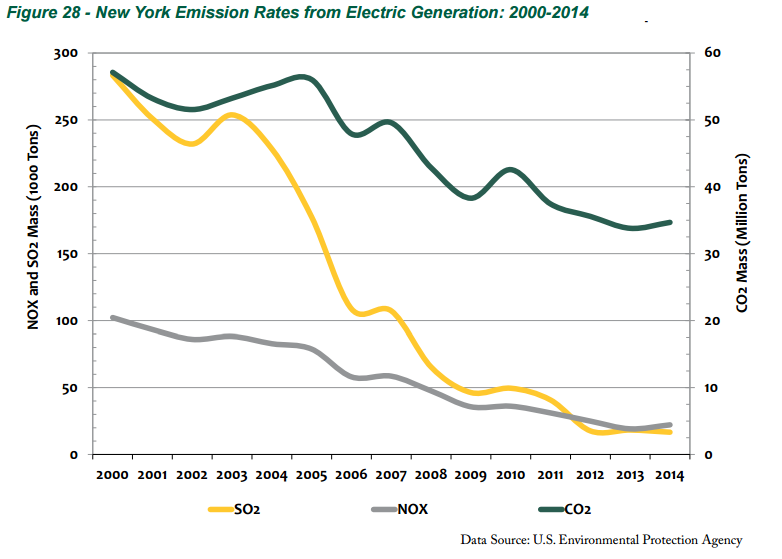 There’s a clear, positive trend going on right now and it’s all possible because of America’s ability to tap into its resources and provide residents with clean, affordable energy – natural gas.

Marcellus Shale development has been benefitting New York since the first well was developed over a decade ago. The prolific nature of the shale increased natural gas production to levels not seen in decades and allowed states in close proximity to development to import domestically produced natural gas. And, despite New York’s Ill advised ban on fracking, the state hasn’t slowed its natural gas consumption, and in fact, plans to increase its supply over the next few decades. As such, all New Yorkers have and will continue to benefit from fracking in Pennsylvania.

And if one looks beyond the New York border, the results are similar. Experts and regulators across the country have attributed emissions reductions and improvement in air quality directly to natural gas development and its end use. Across the country key pollutants traditionally released during power generation have decreased while natural gas production has skyrocketed—and that’s no coincidence.

As you can see in the below charts some of the biggest decreases came from fine particulate matter (PM 2.5), Sulfur Dioxide (SO2) and Nitrogen Dioxide (NO2). 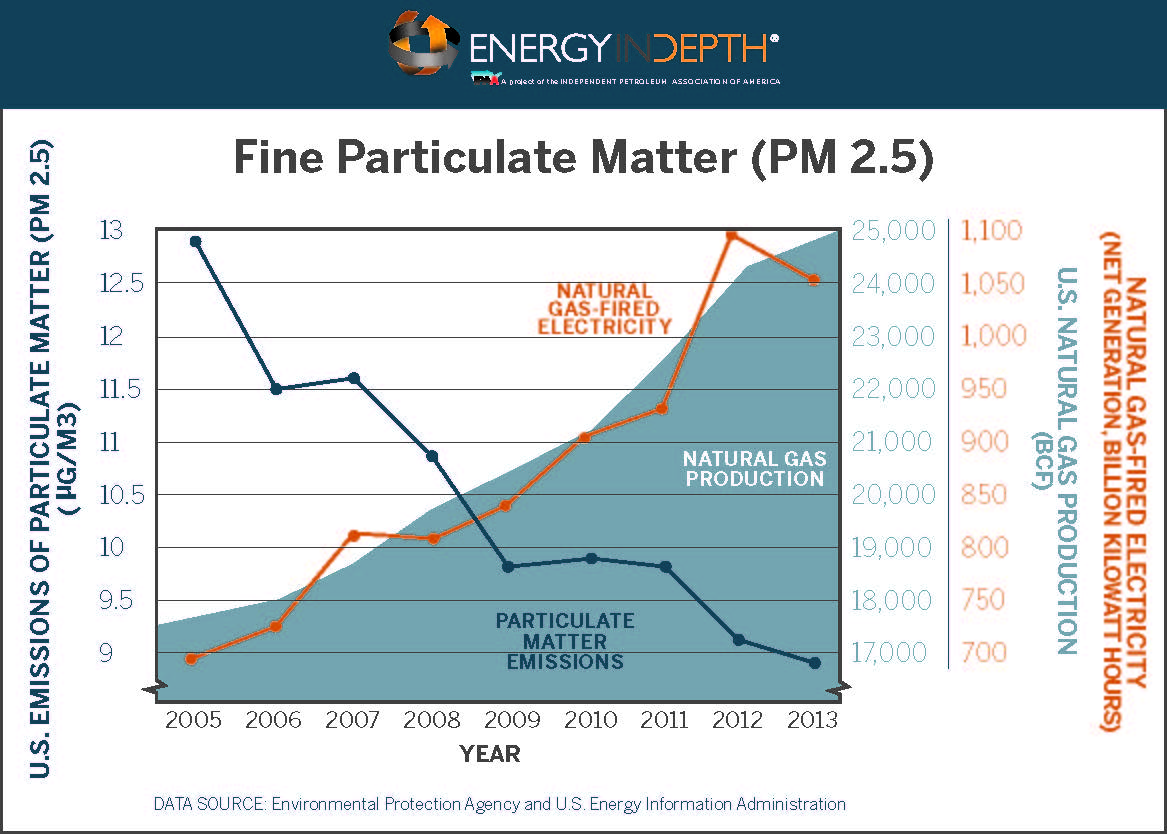 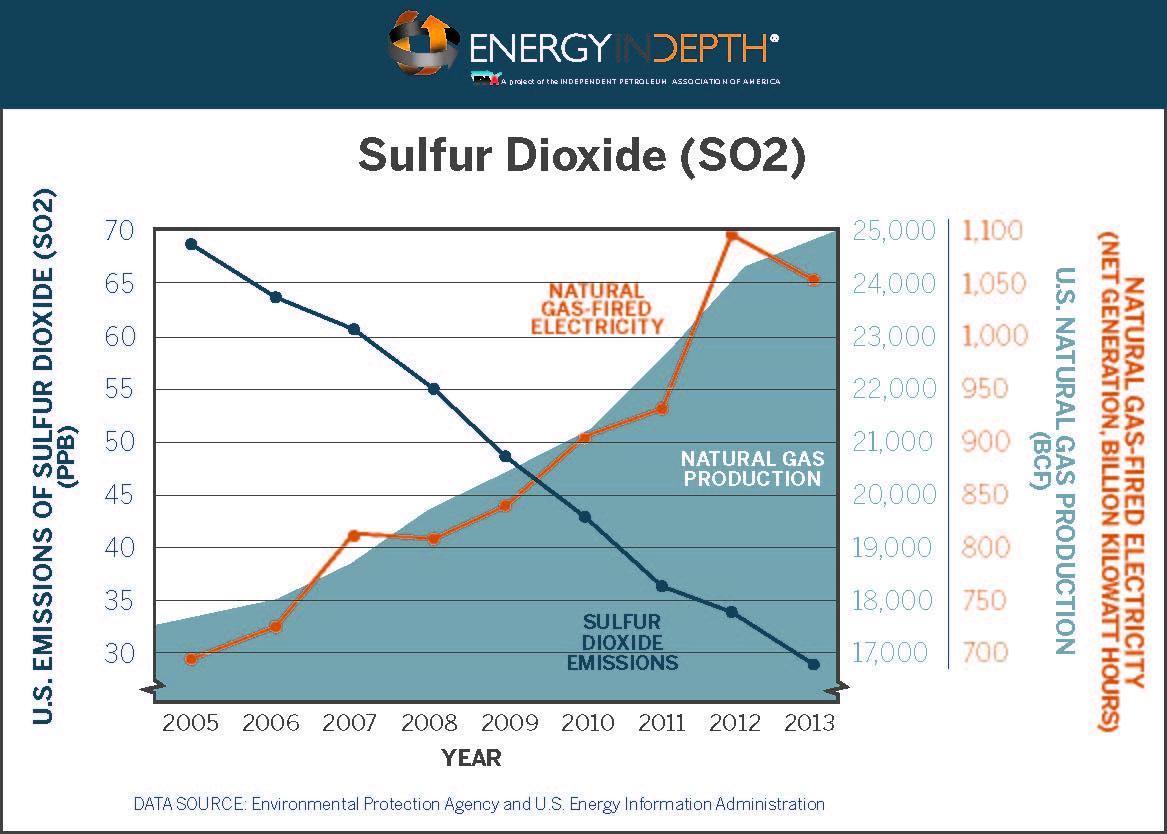 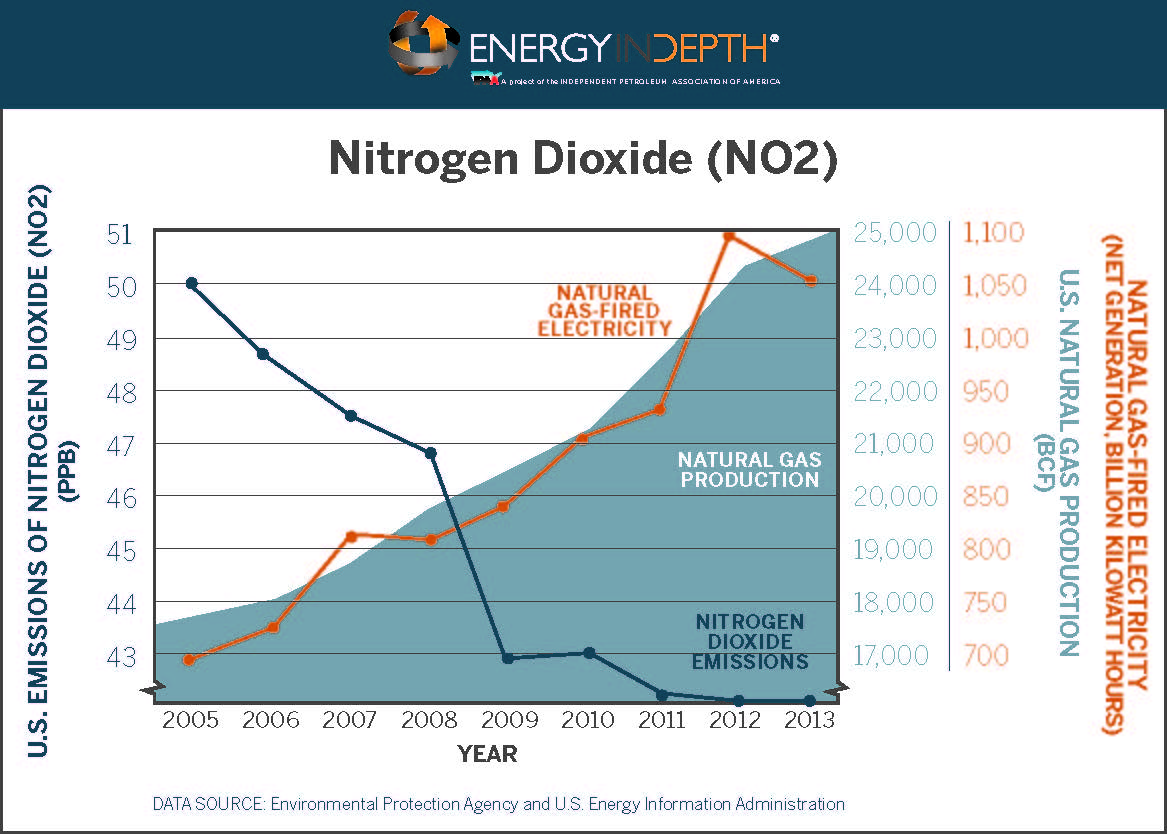 “It is important to note that across-the-board emission reductions […] can be attributed to the steady rise in the production and development of natural gas, the greater use of natural gas, lower allowable emissions limits, installation of control technology and the deactivation of certain sources.” (emphasis added)

“…The environmental and socioeconomic tradeoffs {of natural gas} are important to recognize: lower sulfur dioxide and nitrogen oxide emissions remove some climate cooling agents, but improve ecosystem, health and save lives.” (emphasis added)

Dr. Daniel Schrag, Director, Harvard University’s Center for the Environment had this to say about natural gas and its effect on the air quality:

Let’s call this latest gimmick from these activists what it really is: a ruse to slow and potentially stop these projects from ever being completed. There is a clear consensus that increased natural gas infrastructure – especially in the Appalachian region – has a net benefit to health and the climate. Preventing needed infrastructure to be built only succeeds in denying other hardworking Americans access to cleaner and more affordable energy. Take for instance the folks up in New England, which was specifically mentioned in the Daily Star article on the activists. According to Rick Sullivan, President and CEO of the Economic Development Council of Western Massachusetts and former secretary of energy and environmental affairs in the Patrick administration:

“Study after study has found that meeting the region’s natural gas demands will lower electricity and gas costs, spur renewables, and help meet climate goals. Any proposed pipeline has to be sized to serve existing demand and provide lower-cost and reliable natural gas to Western Massachusetts, allowing local distribution companies to expand supplies to local homes and businesses — spurring economic activity and growth in a region that is often overlooked.”

It was also reported that New England could have saved $3.7 billion during the recent polar vortex if there was additional natural gas infrastructure available in the region. Residents of those states have a real, proven need for increased pipeline projects . These few activists should not be able to prevent a utility from reaching markets where it is needed to provide cleaner, more affordable heat and electricity to U.S. residents. One can only hope the state’s leadership can look beyond the echo chamber that led to its fracking ban, and actually acknowledge the sound science right in front of them.