The crusade by New York’s leaders to block new natural gas pipelines is having real impacts on the state’s economy and environment, according to a new Manhattan Institute report.

“Utility rates in New York are already among the highest in the country—and shutting off access to more natural gas is only going to make things worse.”

These pipeline blockades have occurred under the guise of environmental protection and at a time when New York has committed to one of the world’s most ambitious climate plans.  But as Bryce lays out in the report, it’s actually forcing an increase in the use of traditional, higher-emitting fuel sources, resulting in increased emissions.

These self-inflicted wounds have all happened despite New York’s location in the Appalachian Basin, one of the highest-producing natural gas fields in the world.

Despite its ban on high volume hydraulic fracturing and the state’s repetitive denial of new infrastructure, natural gas has actually been an important and highly utilized fuel in New York. In fact, former New York City Mayor Michael Bloomberg – who this month called for the elimination of natural gas in power generation –  praised the fuel’s clean, efficient benefits in 2012 and credited his initiative to transition the city from fuel oil to natural gas and renewables as “the single biggest step to save lives since we began our comprehensive smoking control program.”

Nonetheless, the Cuomo administration has blocked the infrastructure needed to get an adequate supply of natural gas into the state by using a section of the federal Clean Water Act (CWA) to halt projects. From the Manhattan Institute report:

“As Daniel Estrin, general counsel and advocacy director for the Waterkeeper Alliance accurately explained it, Section 401 of CWA ‘essentially gives states veto power over federal decisions.’ Climate activists have pressured states, particularly ones with Democratic governors, to use that provision to halt or slow the development of gas pipelines and other energy projects.” (emphasis added)

According to Bryce, the consequences of these actions could lead to worse environmental outcomes. For years, New York has relied on fuel oil, a source that has high emission and pollution rates. The city had started a move toward natural gas as a clean-burning alternative but cutting off that supply “will likely result in increased use of heating fuel oil, which means increased air pollution and carbon-dioxide emissions.” Bryce further explained the environmental benefits of natural gas:

Higher Costs for Consumers and Schools

The New York Department of Environmental Conservation is holding up three natural gas pipelines. This continued opposition has led to 30 different communities in New York enacting moratoriums on gas hookups from 2014 to 2019. The Manhattan Institute report details the effects:

“In addition to higher natural gas costs, New Yorkers and New Englanders are paying higher electricity prices than average Americans. … Only four other states on the East Coast have higher residential electricity rates than New York. All of them are in New England: Connecticut, Massachusetts, New Hampshire, and Rhode Island.” (emphasis added) 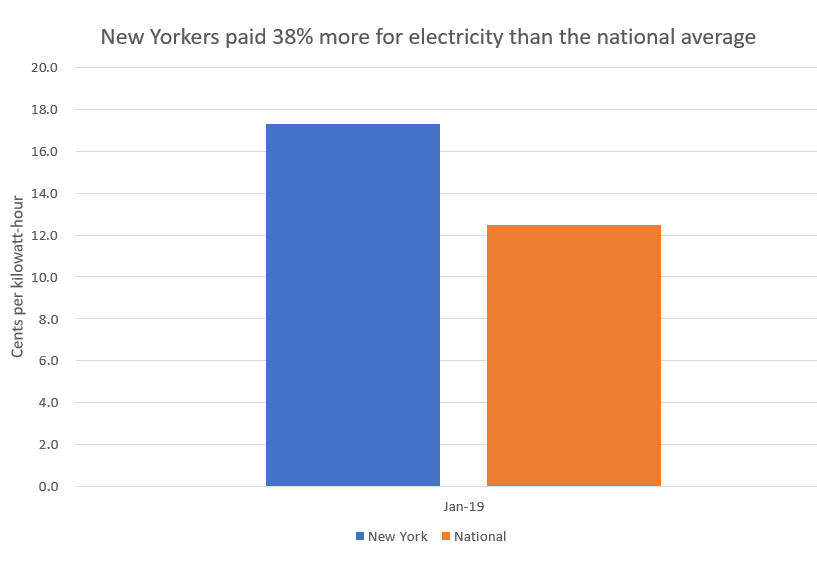 Schools are also suffering from the campaign to cut the state off from natural gas:

“Shortly after Con Ed announced the moratorium on connections in Westchester County, school officials in Yonkers noted that it will likely slow or stop their efforts to renovate aging school buildings in the city. In February, during a hearing conducted by NYPSC, Jason Baker, sustainability director for Yonkers, said: ‘There is no doubt this gas moratorium will end any possibilities of improving or repairing the learning environments in which our 27,000 students learn.’ The Yonkers school district has estimated that switching all its facilities away from fuel oil to gas could save $2 million per year.”

Opponents of natural gas claim that renewables can be a reliable replacement, but in the cold Northeast that often has erratic stretches of wind and sunshine, natural gas has proven to be a reliable back-up – when there’s adequate access to supply:

“A March 2018 report by the National Energy Technology Laboratory (NETL) found that during the bomb cyclone of 2017–18, non-hydro renewables contributed no more than 5% of New York’s and New England’s electricity needs when energy demand was highest. The report noted that ‘wind and solar contributed 1% to 5% of generation at peak’ during the bomb cyclone. ‘In addition, over 160,000 barrels per day of oil were consumed in ISO-NE and more in NYISO, due to constrained gas supply and lack of alternative, competitive generation.’ As most fuel oil in the region is ‘imported or derived from imported crude,’ the report noted, ‘one may infer that the Northeast relied on foreign sources of energy for its emergency electricity production.’”

New York has moved to cut the state off from natural gas supplies by misusing the Clean Water Act to block new pipelines. The Manhattan Institute notes in its conclusion the law needs to be reformed to supply residents with clean, affordable energy:

“Nevertheless, New York needs pipelines to continue switching buildings in the residential and commercial sector away from fuel oil to cleaner-burning natural gas. Finally, and ironically, the constraints on natural gas supplies in New York and New England result in more pollution and higher carbon-dioxide emissions from burning oil.”

“Section 401 of the federal CWA has essentially given state governments and regulators a veto over the construction of new pipelines. Some change at the federal level will be necessary to put reasonable limits on states’ ability to delay or deny energy infrastructure projects.”

President Trump’s recent executive order could alleviate some of this emissions and cost-increasing bottleneck. As Independent Petroleum Association of America president and CEO Lee Fuller explained:

“[T]he updated guidance will prevent any future misuse by certain states in their reviews and unwarranted denials of Sec. 401 permits.”

In the meantime, as this recent Manhattan Institute report confirms, it’s New Yorkers that will continue to ultimately pay the price for the state’s “Keep It In the Ground” agenda.