Ecowatch cites a number of documents Food and Water Watch obtained from the Ohio Department of Natural Resources (ODNR) through Freedom of Information Act (FIOA) requests.  While the use of a FIOA request is not newsworthy (anyone can make the request), what is interesting is what Food and Water Watch did with the documents once they received them from

Listed at the end of the column, are three documents described as “additional documents from ONDR”.  Two of these documents, “Monday Talking Points” and “Zeringer Op-Ed” contain redacted information someone obviously didn’t want to make public. 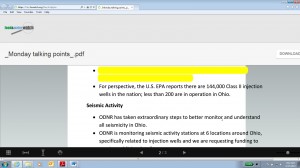 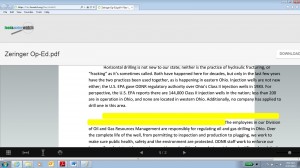 What was truly odd was the Op-Ed by ODNR Director Zehringer identified in the column had already been published in a local Greenville newspaper last year.  Energy In Depth also used a FOIA request to see what ODNR sent to Food and Water Watch.

A cursory glance made clear what lines were redacted from the document: 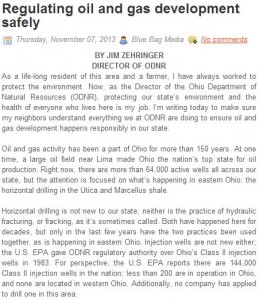 Notice the difference? In both the Monday Talking Points and Zeringer Op-Ed, the line that was redacted pertained to the fact that neither hydraulic fracturing nor Class II well injection has contributed to groundwater contamination in Ohio.

“There has never been an instance of groundwater contamination related to the injection of oil‐field waste.”

“To date, there have been no proven cases of groundwater contamination linked to injection or hydraulic fracturing, and we at ODNR work every day to keep it that way.”

Given the fact hydraulic fracturing has never caused a single confirmed case of groundwater contamination – confirmed by former U.S. EPA administrator Lisa Jackson, state regulators across the country, and reports by the U.S. Geological Survey, the U.S. Government Accountability Office, the Ground Water Protection Council, and the Massachusetts Institute of Technology – it’s unclear why EcoWatch believed omitting these lines from the documents would somehow strengthen their case against fossil fuels. The issue is not really subject for debate.

The fact that Food and Water Watch deliberately omitted this information (in an obvious fashion, no less) demonstrates an alarming shallowness in their repeated attempts to stop the safe and responsible development of oil and gas in Ohio, and other developing states.

In order to ensure the continued success of the American energy renaissance, we need to engage in open, honest and scientifically fact-based dialogue. This incident, and these tactics need to be taken into account next time they seek to join the conversation about Ohio’s, and America’s energy future.